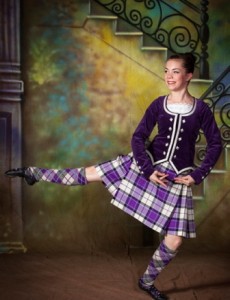 Thirteen-year-old Larissa Godin is at the top of her game–her Highland Games, that is!

The teen has quite a bit of Celtic background, both Scottish and Irish, but she loves Highland dance for many reasons besides celebrating her heritage. “I like how I’ve gotten really strong by practicing it and how there is a specific technique for every position. I love that there are competitions to go to and that I get to meet dancers from all different places.”

She was very excited to become a Canadian champion in July 2012. “It was always something I dreamed of, but I didn’t think my dream would come true,” she said. “…The top six people in the group get a trophy so that was my goal.”

Godin worked very hard to meet that goal. “They started announcing the top six trophies at sixth place, so I couldn’t believe it when they got all the way up to first runner-up and they still hadn’t called my name…I hope to be able to become champion again, but there are a lot of wonderful dancers in my age group so it will be very difficult to do.”

This summer, Godin and her mother will travel to Scotland for the Cowal Highland Gathering where she will compete in the preliminaries for the Highland Dance World Championship. “I’ve been telling my parents for the last few years that I really want to go to Scotland to compete. They didn’t have the time off work or the money to travel to Scotland so they said that maybe if I were Canadian Champion it would be different and they would have to take me,” said the youngster. “They were surprised when I won and they decided that we should go and see what it’s like to compete at the World Championship in Scotland.”