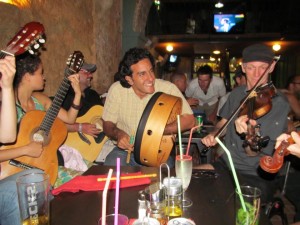 Across the world, in every city, there are places where people congregate to socialize, have a drink and perhaps sing a song or play a tune. These are, of course, pubs and bars – or if you are in Cuba – a paladar bar.

On a narrow street in Old Havana is Las Estaciones paladar bar- a small lounge in the heart of authentic Havana that is popular with both Cubans and with visitors from all countries. It is one of those special places in Cuba where foreigners can mingle with local residents, try out a few Spanish phrases in conversation and make new friendships.

This particular paladar bar is unique in Cuba; twice a week, on Monday and Wednesday evenings, local Cuban musicians gather to play tunes. Cubans enjoy the music of many different genres including, perhaps surprisingly, Celtic music. Dancers exuberantly perform to the jigs and reels of Ireland and Scotland, and to the music of the gaita (Spanish bagpipe).

Cuba has a historic connection with Ireland and many Cubans have Irish ancestry with the founding of the Caribbean nation. It is a connection celebrated annually every April in Havana during Cuba’s festival CeltFest.

Last spring I was with my Cape Breton fiddle friends Chrissy Crowley and Rosie MacKenzie walking through Old Havana’s cobblestone streets when we happened to meet Ireland’s famous Uilleann piper Paddy Keenan, and we introduced ourselves. Paddy told us about the session the CeltFest musicians had at Las Estaciones bar the previous evening. Every night of the festival the musicians gathered there for tunes. The sessions proved so popular that after the festival ended the Cuban Celtic musicians decided to continue with a regular session and now visiting traditional musicians can participate in a session in Havana at any week of the year.

The free-spirited session at the paladar was quite different than the ill-fated first session the Celtic musicians attempted during the first CeltFest in 2010. We had asked the bartender if we could play a few acoustic tunes at a state-owned bar. He cheerfully agreed and we played some music. The bartender liked it. The other patrons liked it. We had only started the third or fourth tune when a military man swept in and angrily demanded that we stop. The session came to an abrupt halt. We packed up our instruments and looked for a more inviting venue that welcomed music which we later found on O’Reilly Street. As we left the bartender gave us an apologetic look, but there was very little he could do. That particular state owned bar was not an authorised music venue, and the uniformed official was not going to make any exception.

A paladar is vastly different than the larger state owned and controlled restaurants. It is privately owned and usually offers better customer service and quality. Las Estaciones provides inexpensive and good food in clean and comfortable surroundings.

I visited the paladar again last month. There were many Cuban musicians performing the evening I arrived. A harpist named Cynthia Coto Picart was there with her mother Gina Picart, a writer of Celtic-themed Cuban books. Will Calver, the tall handsome Cuban gaitero known as the “Ebony Piper” dropped by and played his Galician gaita. The duo “Sean am” – Angélica Góngora and Luis Gutiérrez – played fiddle and bodhran, and the fabulous Cuban bagpiper Alexander “Winnie” Suarez Mendez performed with his Uilleann pipes. The little restaurant filled up quickly and some curious tourists on a stroll joined the party. I congratulated the paladar owner Julio for having the best Celtic session in Cuba. He smiled and acknowledged that it was probably the only regular Celtic session in Cuba.  Special sessions are scheduled for St. Patrick’s Day (March 17), Tartan Day (April 6), and every evening during CeltFest Cuba-April 13-20. Las Estaciones is located at 254 Amargura Street in Old Havana, Cuba.