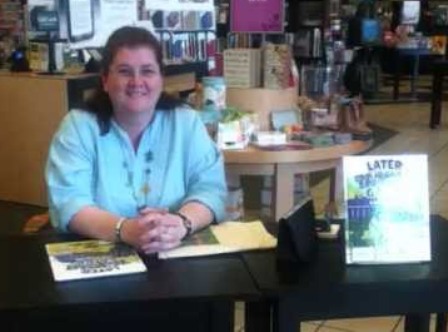 Inspired and inspiring, Scottish author Lorraine Johnston has a hit on her hands with Later Tartan Gator; A New Orleans Tale – a story of courage for children of all ages!

What inspired you to put this book together?
I used to be a children’s nanny for 13 years, quite a few years ago, and loved making up stories and making the children giggle. The sillier the better! Then I entered a career in Social Care for just over 3 years and then progressed into Health and safety. It may seem like a bit of a change of direction, but nothing could be further from the truth. I had experience and qualifications in child care, social care, first aid and teaching first aid, and throughout my early choices of career, I always viewed health and safety as highly important; always. So when I had been happily climbing the corporate ladder as a Group Occupational Health and Safety advisor for some years, I was devastated when in 2008, I suddenly had some worrying symptoms and after a short period of testing, I was diagnosed with Multiple Sclerosis. I went through the normal range of emotions of anger, sadness, denial etc. but eventually had to accept my situation and I opted for voluntary redundancy. I started to write in October 2011, when 2 friends reminded me that I used to tell such “great stories to the wee ones!” No one seemed shocked at this suggestion, except for me! Me? A writer? It seemed a bit random to me. However, I joined a writing club and treated it like college, learning to write in different genres and how to layout a manuscript and I entered quite a few competitions too. I even won some of them, which encouraged me greatly to take it more seriously (but not too much!) and I quickly discovered my inner ‘kid’ and decided that I wanted to become a children’s author. In October 2012, my first book was accepted by Mascot Publishing and the book was released in April 2012.

Did it come together quickly or did you really need to work at it?
I had 49 rejections within the UK – probably a combination of the fact that my stories weren’t quite right for the publishers and also because, I was a nobody. When I received that number 49, I decided that I wasn’t going to wait for number 50! So I put those stories to one side and I sat down to write a completely different story, one that had been mulling around for a few days and one that was set in New Orleans. Once I started the process, the story came really, really quickly indeed.

What was the most challenging aspect of the process?
To be honest, nothing. I was very excited about this particular story line and I enjoyed designing the ‘Mardi Gras Tartan’ for the illustration purposes. I wrote to 2 organizations in New Orleans – Audubon Zoo and Blue Frog Chocolate Shop – and asked for their permission to use their names within my story line and I was delighted when both quickly agreed.  The next thing I knew that I wanted to do with this book, was to choose a charitable organization that would receive a donation for each book sold. After some research, I asked St Thomas Community Health Centre if I could support them and they were delighted. It may be just a little bit of help, but I am still delighted to help New Orleans, in whatever way that I can.

What was the most rewarding part of the experience?
3 things! 1. When I received a box of my books, real books, in a real box, delivered to my home in Scotland – a book that I wrote – amazing feeling to see it in print. 2. When I visited New Orleans in April 2013 to launch the book and I visited St Thomas Community Health Centre and I could see what an amazing job they do there. I felt that I was doing something ‘useful!’ Something that built my confidence a bit, as I hadn’t felt very ‘useful’ since my diagnosis and since my capabilities lessened. 3. My first book signing event was amazing. It felt like a dream. I couldn’t believe that I was actually sitting at a table and signing books for people who had bought them! My book!’

What did you learn during the process?
Oh my goodness! Too much to say here. I’m afraid that I would put you all in a coma! However, keeping it short, I learned so much about the publishing and illustrating process and I learned, importantly, that although my life had changed so dramatically when I became unwell with a very debilitating, and often cruel disease, that there is no point in staying ‘down.’ Becoming a children’s author gave me a new purpose in life and taught me the important lesson that you should just get back up the horse, and get on with it. Just because my horse is now a ‘different type of horse’ doesn’t mean it won’t take me to great places!

How did you feel when the book was completed?
As we say here in Scotland “I was chuffed to bits!” The sense of achievement was amazing.

What has the response been like so far from those that have read it?
I’m a little embarrassed to say this, but people who learn about my journey with my disability, keep saying that I am ‘inspiring’ – if that is the case, then I’m glad. It would make me feel delighted to think that it may just give someone a nudge in the right direction to just “give it a go.” whether or not it is writing or something entirely different. Just do it! Or at least try; it’s amazing what happens when you do. The book is also getting great reviews. Again – this makes me chuffed to bits!

Is enough being done to preserve & promote Celtic culture?
I don’t think so to be honest and I feel that anything anyone can do to positively promote our culture should do so. I dearly love America, and New Orleans has a special place in my heart, a home from home if you will. And I love my homeland of Scotland dearly and with a passion. I was born in Glasgow and I truly was delighted when the idea came to me to write a Scottish/American fusion children’s book. I’m thrilled that folks all over the world seem to be receiving it well too!

What’s next on your creative agenda?
I have been asked to adjudicate the ‘Under 7’s’ category in The Scottish Association of Writers conference in March of this year. I belong to a steering group of a writers networking organization called ‘Weegie Wednesday’ and I have oodles of stories completed, half written, started and one or two submitted to publishers over here in the UK. I’m thoroughly enjoying the journey of my very first book ‘Later Tartan Gator’ but equally looking forward to the next books too! What a journey!