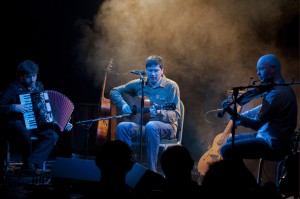 Webster Hall in New York City is the scene of tonight’s Caledonia Collective concert, which will feature some of the hottest Scottish bands around today, including renowned trio Lau. Recently we spoke with the band’s lead singer, Kris Drever.

What are your own roots?
I am from the Orkney Islands in the far north of Scotland, my immediate family are musical people with a lot of folk music in their repertoire.

When and why did you start playing music?
I started playing guitar on my 13th birthday but I have been singing as long as I can remember. I don’t know that I consciously made a decision to play music as much as I was drawn to it as something pleasurable.

Are they the same reasons you do it today?
Yes, I love making music and I love the sociable aspects of playing music with others and I always try to maintain that feeling about music and it’s role in my life.

How has the group evolved over that time?
Our vocabulary has developed significantly. Concepts that used to take a long time to talk through can now be got at in a few little phrases because of the painstaking work that has already been done. The rehearsal process we went through in the early stages has laid a framework for arrangements that we couldn’t possibly find time to develop now.

What are the challenges of the profession?
Finding time for everything. Balancing a home life with enough touring and writing. Convincing your peers that it is an actual job………

What does the band have on tap for the rest of 2014?
Our own festival curations, a number of big UK festivals, trips to South Korea and Europe, performances with Elysian Quartet(with whom we recently wrote a commission for performance during the commonwealth games)and writing and recording a brand new album. Hopefully that’ll be enough.

Is enough being done to preserve and promote Celtic culture generally?
I think the music scene that we’re a part of needs very little preservation; it’s vibrant and full of life and innovation. I’m not sure what constitutes Celtic Culture really, Celtic is a catch all term for a whole lot of different countries and regions that each has it’s own distinct culture and customs. I’m not sure how folk would go about promoting them as one homogenous whole without hurting someone.

What can we be doing better?
Separating fact from opinion and celebrating kindness.