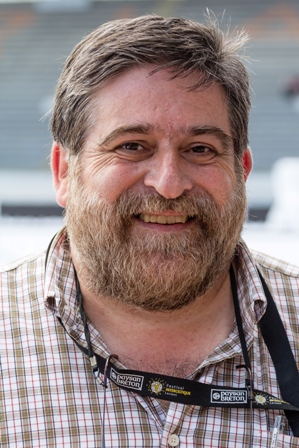 He may be the busiest man in Brittany, but Lisardo Lombardia is happy to take a few moments by phone to wax philosophically on his favourite topic.

“Everyone always takes note of the melodic qualities of Celtic music,” muses the Executive Director of the Festival Interceltique de Lorient. “And that’s understandable; the voice, fiddle, and especially the pipes, are so prominent.

“Me, though – I always hear the pulse of a song first. The rhythmic instruments, especially the drums and the bodhran, are the foundation of the music, sitting below the melody lines, keeping the tempo like a heartbeat.”

As the heart and soul of the world’s biggest Celtic festival – which attracts nearly one million visitors to Brittany’s beautiful southwest coast each year – Lombardia is more than qualified to speak to the subject of its soundtrack.

“We’ve had some of the biggest names of the genre perform here over the last 45 years,” he continues; “Alan Stivell, the Chieftains, Natalie MacMaster, the Dubliners – too many to recall. And one thing I noticed about those great musicians, and some of the very good new artists, is they all have very tight rhythm sections. If the pacing – that heartbeat – is sound and strong, then everything else falls into place.”

Things are falling into place nicely for this year’s festival, which takes place in the charming community of Lorient from August 7 to 16. Along with another star-studded line-up of performers, including Simple Minds, Carlos Nunez, Plantec, Charlie Winston, Zachary Richard and others from the seven Celtic nations and beyond, rumours have been swirling since April that the Rolling Stones might make the bill.

And if all that music wasn’t enough, the ten-day gathering brings a mélange of other Celtic cultural components into the mix, including parades, dancing, theatre, literature, cinema, cuisine, competitions, and more.

Lombardia, who was born in the Asturias region of northern Spain, explains that, since its inception, Interceltique has always strived to integrate an array of influences.

“At the heart of it is the idea that what it means to be Celtic today is up for negotiation.

How do we define ourselves as a people? And how do we redefine ourselves for the modern world? Are we cross-Celtic? Pan-Celtic? That concept has become a bit of a moving target.”

He adds that, as the classification of Celtic has evolved, so has the festival.

“It has opened the door to greater opportunities for us; today we have acts from all over the world, playing styles of music that you perhaps wouldn’t have heard just a generation ago – Euro-Celt, Afric-Celt, Celt-Asian, etc. This ongoing, organic cross-pollination of cultures will continue to present all sorts of exciting possibilities for us in the future.”

While Lombardia’s enthusiasm for fresh sounds keeps the festival going forward, he is careful to keep one foot firmly in the past.

“We know where we come from. Our roots are deeply embedded in the seven Celtic nations, and everything that has sprouted and grown here in Lorient over the last 45 years has come from that rich soil.”

As with previous gatherings, the 2015 festival will again honour individual Celtic regions. This year, the spotlight is on both Cornwall and the Isle of Man.

“Ireland, Scotland, Wales and Brittany get a lot of attention,” admits Lombardia. “When we think of Celtic, we most often think of those countries. The reality is that these smaller Celtic countries – Cornwall and Isle of Man – are just as vital to our Diaspora as the others. The current Celtic revival in those two places is due in large part to the great music coming out of there right now.”

Many of those artists have been invited to appear at this year’s festival, including Barrule, Kezia, the Aggie Boys Choir, Ruth Keggin, 3 Daft Monkeys, Russell Gilmour, and Cornish quartet Dalla.

“I first went to Lorient many years ago in my teens,’ recalls Neil Davey, Dalla’s senior member. “It was a great inspiration, and in many ways a homecoming. We were in a small minority of people interested in playing Cornish Celtic music back home at the time, and suddenly at Lorient we were surrounded by thousands of people celebrating their Celtic traditions, and recognizing ours too. Those first trips to Lorient lit a fire which has driven me throughout my career.”

Like Davey, Sam Kelly of fellow Cornish band The Changing Room is excited for the opportunity to appear before appreciative audiences.

“We are delighted to be involved with this year’s Festival Interceltique,” he shares via email. “We have all wanted to perform there for such a long time, and the timing couldn’t be better for us.”

Kelly is referring to the newly-formed quintet’s recent string of successes; earlier this year, the group picked up Pan Celtic Song of the Year honours, along with two other awards, at an international event in Derry, Northern Ireland.

“There seems to be a surge in interest for all things Celtic at the moment,” he adds. “We are doing our bit to raise awareness of the Cornish language by drawing upon our country’s culture and heritage, and our Celtic roots, as inspiration for our songs. It certainly gives us distinctiveness.”

Cornish harpist Sarah Deere-Jones will be making her Lorient debut this year also.

“It will be terrific fun to play at one of the major Celtic festivals in the world and see all the other artists,” she notes. “And I love the idea of forging closer links between Breton and Cornish traditional music – it simply makes sense considering how close we all are to each other.”

That feeling of inclusiveness and belonging, notes Limbardia, remains close to the core of the event’s mandate.

“We may be seven nations, and our Diaspora might be spread all around the planet, but we are one family. And like all families, we continue to grow.

“Interceltique has certainly evolved since 1970 – it’s had to; the popularity of Celtic music – and the large number of artists now producing it – has grown significantly, and we have adapted accordingly.

“All that said, and however much the body of the festival has changed, the heart and soul of the event remain the same.”