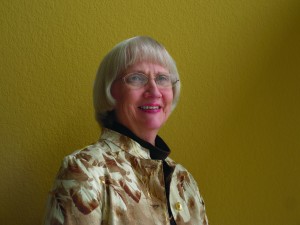 Having studied French and German, Dorothy Gremillion felt she had a knack for languages. An Episcopal priest, the Texas resident is tackling Welsh in retirement and is finding it the most difficult academic endeavor she’s ever undertaken.  But since she’s part Welsh and feels profoundly at home in Wales, Dorothy is persisting. Here, she describes her experience with the language.

The Welsh language creates an event in my life.  It changes me bit by bit, rearranges my way of knowing, satisfies my sense of humor, and fulfills the longing of my heart.

So why can’t I speak it or write it?  How can I be at home in those sounds while my eyes glaze over with non-understanding?  Recently, I took an immersion language course at the University of Wales.  With forty hours of classroom time every week for two months, you’d think I’d be a fluent speaker.  Yet speaking and writing elude me.

Sometimes I think Welsh is alive, with a personality as impish as I imagine the dragon of Wales to be.  It’s as though the beast picks me up and wrestles with me.  Just when I want to understand, I have no comprehension, even though I’m aware that’s the vocabulary I mulled over at breakfast.  In the next moment, I’m surprised at knowing something I didn’t know I knew and am sure I hadn’t studied.

The dragon must have caused Welsh to grow inside my brain when I wasn’t looking!

Difficulties include the fact that stating possession places pronouns before and after the modified noun.  And ‘mutation’ changes the first letter of a word to another letter according to certain rules.  For example, the Welsh word for ‘father’ is ‘tad’.  If I want to say “your father,” I translate “eich tad chi,” which literally means “your father you”.  Strange, but fair enough, ‘tad’ is still ‘tad’.  But, “his father” becomes “ei dad e;” “her father” becomes “ei thad hi;” and “my father” becomes “fy nhad.”

The dragon chuckles over my shoulder.

The word order seems illogical to me.  I’ve yearned for a grammar book that would give a literal translation in English of each Welsh sentence, so I could construct another sentence on my own.  One day I came across a text that does just that.  It didn’t help.  Take the sentence “Mary is tired of running.”  The Welsh equivalent, “Mae Mair yn blino ar redeg,” translates literally back into English as

The dragon breathes a cloud of smoke, making my head spin in a mental fog, as I wonder how I will ever grasp the language.

The appearance of written Welsh stupefies the uninitiated with a seeming preponderance of too many consonants.  Strings of consonants appear that don’t go together to the English-trained eye.

Consider, “Llanfairpwllgwyngyllgogerychwyrndrobwllllantysyliogogogoch.”   It means “the Church of Mary in the hollow of the white hazel near the fierce whirlpool and the Church of Tysilio by the red cave.”

The dragon and I squeal with delight!

Hearing the sounds of the language would also make you swear there are too many vowels.  There are seven vowels in Welsh, one of which is ‘w’, which sounds like ‘ooh’ in English.  The word ‘pwll’ suddenly becomes pronounceable. Well, almost… First you must know how to utter the ‘ll’ sound.  Place your tongue behind your upper teeth as in saying the letter ‘l’.  Now hiss with your tongue in that position.  You just made a lateral lisp, a sound sort of like English ‘sl’ but not exactly.  After I’ve made several lateral lisps reading Welsh, I find it difficult to place my tongue in the correct part of my mouth to pronounce English ‘sl.’

The dragon laughs as my native tongue stumbles, and I wonder if I’ll need speech therapy to speak English again.

My comprehension of Welsh is improving, though.  I recently visited some Welsh-speaking friends.  As I listened, I gasped, “I understand what you’re saying!”

They answered, “Wrth gwrs,” (“Of course.”) Then one night I dreamed in Welsh!

While asleep, I ‘heard’ a sentence that I hadn’t studied.  To my amazement, word order, verb tense, and mutations were correct.  Wide-eyed, I thought, Welsh has burrowed its way into my subconscious!

No matter how difficult the language, my heart sings with happiness as the time comes around again to study Welsh.

The dragon smiles and blinks his eyes as I pick up my books for another session. He knows I love it.