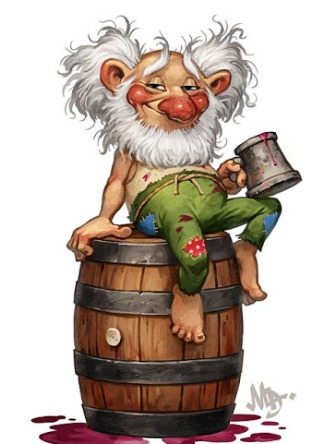 Some sources would suggest that the ‘wee folk,” commonly known as the Leprechaun or Clurichaun, have inhabited Ireland since well before the Celts arrived – around about 500 BC. Other sources suggest that the word Leprechaun may have derived from the Irish versions of “leath mhrogan [shoemaker], still others suggest its origins lie in the Irish word luacharma’n [pygmy or pixy].

There are many derivative names for the  Leprechaun  [Irish word leipreachán] – and a definition of this by Patrick Dinneen, for example, is that the Leprechaun is a “pygmy, a pixi, or sprite” and would suggest that the word Leprechaun is a corruption of middle Irish, and attests to the early influences of ecclesiastical Latin. Other sources would suggest that the earliest recorded instance of the word ‘Leaprachaun’ in the English language was in 1604, when the comedy play ‘The Honest Whore‘ [Part 2] had a scene in it which reads: As for your Irish lubrican, that spirit / whom by preposterous charms thy lust hath rais’d / in a wrong circle.”

Lubrican and Logherymans are other derivatives of Leprechaun. David Russell McAnally would suggest that the leprechaun is the son of an “evil spirit” and a “degenerate fairy” and is “not wholly good nor wholly evil.”

A valid reason for avoiding humans

A very mischievous and intelligent population of Ireland, Leprechauns are noted for their smart dress, in red breeches with black stockings, and as noted prior, a red jacket, with a frilled ruff around his neck, with frills at the wrists; he also donned a black hat.

To set off all of this finery, he wears a silver buckle on his belt with silver buckles on his ankle-length boots, to match. About three feet tall, the leprechaun cuts an alluring, charming profile perched atop the shoulder of his human host. Attaching themselves to certain principled Irish clans, leprechauns are known to move abroad with these descendants, which is probably how they mix well in Hollywood!

The Leprechaun will mostly be found working on a single shoe — he either has a wizened face or a fat, pursy round face, red from drinking poteen or moonshine; in all descriptions, however, he carries a magic wand ready at hand for all purposes.

The 18th-century Irish poet William Allingham describes the appearance of the Leprechaun as “a wrinkled, wizen’d, and bearded Elf, spectacles stuck on his pointed nose, silver buckles to his hose, leather apron — shoe in his lap…”  Samuel Lover, writing in 1831, describes the leprechaun as “quite a beau in his dress, notwithstanding, for he wears a red square-cut coat, richly laced with gold, and inexpressible of the same, cocked hat with shoes and buckles.”

According to W.B Yeats, however, solitary fairies, like the Leprechaun, wear red jackets, whereas the “trooping fairies” wear green.

However, regardless of how, why, or where our national myths or folklore derive, suffice it to say that they are still with us. Wherever one travels and meets with other cultures — and one happens to mention that they are indeed Irish – then all the myths associated with Ireland come spilling out, particularly about the leprechaun.

Well-known for their buried treasure, thought to be hidden at the end of an Irish rainbow — some sources would suggest that the Leprechaun has a valid reason for avoiding humans. They are, indeed, a law onto themselves. They are the self-appointed guardians of Ireland’s ancient buried treasure (thought to have been left by the Danes as they plundered and pillaged), typically burying their treasure in crocks or pots deep in the Irish countryside. They credit themselves for having kept these hoards safe for centuries. They regard humans as greedy, foolish and flighty creatures, and therefore not worthy of knowing where the treasure is buried, nor, of course, worthy of having access to the loot.

Leprechauns like to drink poteen. They are keen musicians who like to dance, play the fiddle and the harp, and are well-known for their musical talents. They are known to have wild music-sessions at night, which, in Ireland, are known as ceilis, with hundreds of Irish leprechauns gathering to dance, sing and drink poteen. They never do, however, become so drunk that the hand that holds the tiny shoe hammer becomes so unsteady that their shoemaker’s work is affected.

Other sources suggest that on the west coast of Ireland, where the Atlantic winds bring constant rain and winds, the Leprechaun will dispense with all his frills in favour of a frieze overcoat [a type of plasterwork] to protect his smart suit and hat. He is so protected by this overcoat that a person would pass the Leprechaun on the road and not ever know that he was there.

This dress code, of course, would vary in differing regions of Ireland – and none more so that when Ireland gained its Independence in 1922. In this period, the Leprechauns changed their code of dress dramatically, to wear green jacket with white breeches, green stocking and a black hat, setting it all off with a silver buckle belt and silver buckles on his shoes. They are said to this day to be very proud of the fact that they are inhabiting an independent Ireland!!

The Leprechaun family would appear to be split into two different groups. The Leprechaun are deemed to be hard-wording folk, with principled occupations as shoe makers and tinkers, and they dare anyone say different [Tinker being a derogatory term given to the Irish traveler]. They are exceptional in the realm of the faerie’s world, as they are the only faerie who has a proper trade. Tinkers are, in fact, metal boot-makers and trades-people that have great ability to mend or fix anything. Whereas their cousins the Clurichaun, are very different characters.

Enter now into the world of the Leprechauns’ ne’er-do-well drunken cousins, the Claurichauns [clúachan, meaning Clobhair-ceann] shoemaker. Leprechauns are highly embarrassed by their drunken cousins, and they are known to totally disassociate themselves from them, not even acknowledging their existence.

Nicholas O’Kearney, the 19th century folklorist, in 1855 describes the Clurichaun as “… another being of the same class: He is jolly, red-faced, a drunken little fellow, and was ever found in the cellars of the debauchee, Bacchus-like [Bacchus is a comics character created by Eddie Campbell and based upon the Roman god of wine] astride of the wine butt, with a brimful tankard of wine in his hand, drinking and singing away merrily. Any wine-cellar known to be haunted by this sprite was doomed to bring its owner to speedy ruin.”

If clurichaun are mistreated in any way — they take umbrage at the merest hint of a slight, they will wreak havoc on your home and wine-cellar. Born hypocrites, they steal everything in sight, but if they see a dishonest servant or a human drunkard, they will torment the victim, jumping from cask to cask to follow him (or her).

They are known as bitter little monsters — the best way to keep them happy and on your side is to keep the liquor cabinet well stocked!! Scholars of folklore, however, disagree as to whether or not the Clurichaun is a distinct species, or a faerie, or if, in fact, they are just a Leprechaun on a bender every night. The Leprechaun family, however, would reject this notion, and are incensed by the fact they are even mentioned in the same breath as the Clurichaun. The Leprechaun, in their personal narrative, are respectable and hardworking, and do not over imbibe every night, and are — they defiantly maintain– not bitter little monsters causing mayhem.

Having been told that if he moved beyond a running stream, the household would be rid of the Clurichaun, Mr. Harris attempted to do just that by moving all the household furniture and cellar barrels and wines. However, the wily Clurichaun, knowing what was happening, wedged himself into one of the beer barrels and, as Mr. Harris began to move with his wagon-load of goods, he heard a noise. The wily Clurichaun called out, “Here we go, Master! Here we go all together!  “What,” shouted Mr. Harris; “dost thou go also?” – “Yes to be sure, master. Here we go, alt together.” “In that case,” replied Mr. Harris, “let the carts be unloaded, we are just as well where we are.” Mr. Harris died soon afterwards. It is said, however, that the Clurichand still haunts the Harris family. [

In 1963 – John A. Costello, taoiseach from 1948 to 1951 and from 1954 to 1957, addressed Oireachtas [Ireland’s national Parliament] by delivering a scathing attack on all of the myths regarding Ireland’s tourist industry. “For many years, we have been afflicted with the miserable trivialities of our tourist advertising. Sometimes, it  has descended to the lowest depths, to the caubeen and the shillelagh, not to speak of the leprechaun and the clurichaun. … No more.”

In the United States, films, television cartoons and advertising have popularized a specific image, which bears scant resemblance to anything found in the cycles of Irish folklore. Amusing though it all may be, however, many people of Irish descent all the world over find the Leprechaun and other myths little more than a series of stereotypes, derogatory, and undermining the Irish people as a whole. Other Irish people or Irish descendants, however, take pleasure in being the focus of such widespread imagery. As for the wee people themselves, it seems clear they’d just as soon keep us guessing as to their actual form.