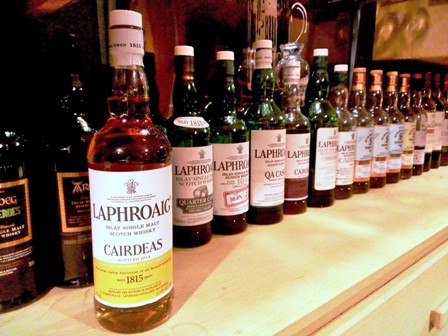 2015 is a big year for Laphroaig, as the renowned distillery celebrates its 200th anniversary.

The distillery, or at least its proprietor, was almost certainly making whisky well before going legit in 1815 – a common practice at the time, with farmers and cattlemen turning their surplus barley into whisky. This was especially true on the islands off Scotland’s west coast.

Islay’s whiskies are considered to be the most heavily peated and smoky in Scotland. Because of the island’s remoteness from the rest of the country, the tradition of burning peat to dry the barley lasted longer than it did in the Highlands. By the time residents had access to other forms of fuel it was no longer in the distilleries’ interest to change, as producers of blended scotch required the peaty-smoky whiskies to add character to their product.

Historically there would have been hundreds of small stills on Islay, most of them illicit. At the height of illegal distilling in the early 1800s, the island’s population was surging. Within a few decades, commercial distilling took root there, and by the end of the 19th Century, there were 23 licensed producers on the isle.

Laphroaig Distillery was born during Islay’s 19th century boom, established on the southern coast of the island in 1815. The distillery was built by Donald and Alexander Johnston, members of the MacDonald Clan which once ruled Islay and Western Isles as an independent kingdom. The brothers leased 1000 acres from the Laird of Islay for the raising of cattle, also growing barley for feed and whisky.

Word of the high quality spirits being produced at Laphroaig spread quickly across the island, and the brothers soon realized that whisky was far more profitable than raising cattle. Alexander moved to Australia, but Donald continued at the distillery until 1847, when he died – allegedly after falling into a vat of whisky. The distillery would stay in his family’s hands for another century, until his last descendant, Ian Hunter, passed in 1954, leaving the distillery to his trusted manager Bessie Williamson. The distillery was then sold to commercial interests in the 1960s, and is now an anchor brand of Beam Suntory. Today it is the best-selling Islay whisky in the world.

Laphroaig has, without doubt, the most divisive flavour profile of any single malt whisky, sourcing its peats from relatively low elevation moors on the island. These peats are one of the reasons for the distillery’s very distinct flavour profile. Many have tried to reproduce Laphroaig’s style – most notably Lagavulin in the mid-1800s – but all have failed. The combination of Laphroaig’s peat, its water, and the shape of its stills, create a truly unique expression. Antiseptic, military dressings, band aids, iodine, seaweed, smoke and tar are all terms regularly used to describe Laphroaig whiskies. This proved an asset during prohibition in the United States, when Ian Hunter was able to convince authorities that Laphroaig had medicinal properties. Laphroaig was one of the few legally available whiskies in the US during prohibition, albeit by prescription.

The distillery’s core range consists of five whiskies. Most innovative is the Laphroaig Quarter Cask ($55) which is finished in 120L barrels, increasing the spirit’s exposure to wood and speeding up maturation. Next are the Laphroaig 10 Year ($70), and Laphroaig Triple Wood ($96), the latter matured in Bourbon, Quarter Casks and Oloroso Sherry Butts. Atop the range are the Laphroaig 18 Year ($110), and the Laphroaig 25 Year ($540), each available in limited quantities in selected markets. The distillery also releases whiskies under the Laphroaig Cairdeas label – Cairdeas meaning “friendship” in Scots Gaelic. The 2015 expression of Cairdeas is the best in recent years, made with more heavily peated malt than Laphroaig typically uses (80ppm), and crafted only with the distillery’s three small stills, giving it a fruitier character. The Laphroaig Cairdeas 2015 will be making its way around the world this year, available to the Friends of Laphroaig.

The distillery has long been a favourite of Charles, Prince of Wales. He was apparently especially keen on the old 15 year, which was discontinued about a decade ago. He’ll be happy to know there is a new 15 year set for release this year. Charles gave the distillery his Royal Warrant in 1994 – a rare honour. Whether it will become The Royal Laphroaig Distillery when he ascends the throne remains to be seen.