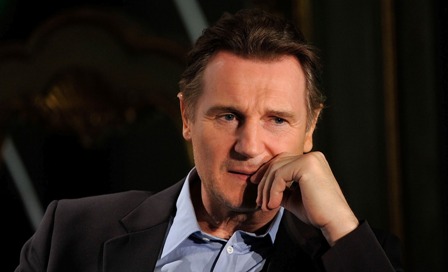 Few exports from the Emerald Isle have had more of an impact on Hollywood than Liam Neeson.

The 62-year-old from Ballymena has done it all on the silver screen: from winning an Academy Award for his breathtaking performance in the Steven Spielberg classic Schindler’s List, to playing a Jedi Knight in the much-anticipated Star Wars prequels. Neeson has voiced Aslan in the Chronicles of Narnia, appeared as Batman’s nemesis in Christopher Nolan’s Dark Knight series, and reinvented himself as the no-nonsense hard man in action thriller, Taken. But it is his portrayal of revolutionary Michael Collins in the 1996 historical biopic of the same name that has resonated most with Irish audiences.

Now Neeson is drawing positive reviews yet again for his portrayal of ex-NYPD cop Max Scudder in A Walk Among the Tombstones, drawn from Lawrence Block’s novel of the same name. The terse drama sees Neeson help a heroin dealer find the men who kidnapped and killed his wife. But it’s not the first time the criminals have done such a crime and suddenly Scudder finds himself hunting for the men before they kill again.

Such action roles are almost standard stuff for the actor. Before he was an actor, Neeson worked in the trenches as a forklift operator for Guinness, a truck driver and assistant architect. His life took a turn when in 1976 he joined the Belfast Lyric Player’s theatre, which  would set him upon his acting career, culminating in a move to Dublin’s Abbey Theatre, where director John Boorman signed him on to work in Excalibur.

Neeson is a picture of health upon his arrival at our Los Angeles meeting; he is tanned, in remarkable shape and looking a good decade younger than his age.

“It’s just a number. It doesn’t bother me at all. It really doesn’t – and my knees are actually okay,” he says, despite his new status as an all-action superstar. “I don’t often get beaten up, except in [A Walk Among the Tombstones] I did a little bit. My stunt coordinator, Mark Vanselow, we have done 16 films now, so we are a very tight little family. I’ve never been hurt, nor has he; we rehearse hard and for a long time. Then we just try and make it look real, as well as trying to avoid what we had done in the last film or the film before that,” he explains. “I do a hodgepodge of stuff [to keep fit]. I’ve trained in gyms from the age of nine and every so often you hit a wall, so I try and be outside as much as possible. I do a lot of power walking and I use kettle bells a lot.”

While the one-time boxer still uses a punching bag to work out, he reveals that he’s also taken to doing yoga with his long-time friend Ralph Fiennes.

“He’s a real practitioner. He’s very into yoga and stuff like that and I do little bits of it with him. We hike and walk together.”

When asked if he would consider emulating his friend in returning to theatre any time soon, Neeson responded: “I would love to. Find a new voice. A new playwright. I think off-Broadway or maybe Broadway. It’s very, very hard because the failure rate is so high. And it is with musicals too, actually. But I have been asked over the years to do revivals of things and it just hasn’t interested me.”

Despite his keenness to get back into theatre, Neeson admits that there isn’t a role he has forever yearned for: “I never wanted to be Hamlet or King Lear, any of that. There’s nothing that springs to mind, I’m ashamed to say. I’d maybe like to do a Chekov, like an Uncle Vanya with my friend Ralph. I would love to do that. He is awfully good with Shakespeare.”

While failure rate may have deterred him on the stage, on-screen Neeson has no such concern and is currently ranked among Hollywood A-list’s elite high earners. But at an age when an actor’s career typically slows down, what has contributed to the upward trajectory of his?

“The first Taken film. I thought it was a good little European thriller that was going straight to video, not because it wasn’t good enough, but because it just didn’t belong to this time for some reason. But 20th Century Fox took it, did an amazing PR job with it, it became a hit and was very successful. I guess Hollywood started seeing it in a different light.”

Such is his stature; Neeson’s name alone is now enough to bankroll films, yet the Irishman remains humble.

“It’s good. It’s lovely and I don’t abuse it. I have no designs to become a director or even a producer, but it’s nice to get a script that says ‘offer’ rather than ‘look at this and let me know what you think.’ It’s kind of nice.”

But it hasn’t always been so simple, Neeson revealed, citing a lack of work as the reason he moved to Los Angeles where he now resides with his two sons, Michael, 19 and Daniel, 18.

“I came over here to LA in 1986 because the work in London kind of dried up for me and the pound was getting very strong against the dollar. The Americans had stopped coming in to make TV shows, because I did a bunch of those in the early 1980s. So they dried up and I just thought I would have to go where the work is. It was here.”

Nevertheless, the actor has not forgotten his Celtic roots. Having recently attracted an overflowing crowd to an Irish heritage tribute at New York City Hall, where he was given the seventh City Council’s Thomas Manton Irish Man of the Year award, in addition to voicing several adverts in a Northern Ireland tourism campaign, Neeson admits he misses home too much to stay away for long.

“I go over quite often. My family still lives in Ireland.”

It is there that Neeson sometimes visits another long-time showbiz pal, U2 frontman Bono, with whom he is cooking up a film project of sorts.

“We chat. And with him a lot of the time you just listen. He’s a wonderful man; he’s very interested in film and he’s got an idea for a script that we have been kind of currently working on and have been for the past six or seven years now. We have an idea for a story that is his original idea. Musicians in Ireland are called show bands, and they are really indigenous to Ireland. They are a team of seven or eight musicians and there are saxophones and guitars and all the rest of it. They do covers of pop songs. And there was only one group who ever moved out and were successful in Las Vegas for 30 years – a total anomaly. Anyway, we have an idea to do a story, not about that band, but the band that has been there for 30 years and has been playing really tiny, tiny hotels.”

Neeson sees it as something of a comedy and a drama: “It’s a terrific idea he has, but it’s just taken a long time to put all the pieces together.” With two cross-industry powerhouses at the helm, he estimates the project could get off the ground in the next two to three years. Music, however, can be filed neatly with directing and producing for Neeson, with the actor having no desire to make the transition like many of his Hollywood counterparts; “I listen to music, but am not familiar with popular music. Ever since John Lennon was killed, I stopped listening to popular music. “

For now, Neeson is content with his status as an action hero, taking some inspiration from on-screen ass-kickers before him.

“Steve McQueen in the ‘60s and some of those guys Robert Mitchum played [in the ‘70s], the Dirty Harry character that Clint played, they all had something. They were just the right side of the law but they put their foot in both camps. They were iconic and audiences seemed to like that sort of screen character.”

When quizzed on which British or Irish director he would most like to work with, Neeson was quick to praise the British camp.

“They [British and Irish actors and directors] are so fantastic now. There are some good up and coming directors, and Danny Boyle I would love to do something with. There’s a very good crop.”

We couldn’t let Neeson go without inquiring as to whether his on-screen adrenaline fuelled antics extend to his everyday life. So what is the most daring thing the Irishman has ever done?

“I actually climbed a tiny little mountain in Utah and I have a fear of heights! My son and I climbed this little peak, it was called Molly’s Nipple,” he laughs. “It was only about 3,000 feet or something. I was really scared, especially getting near the summit and it wasn’t quite pick axe territory, but it was pretty steep. There were a couple of moments where everybody said ‘don’t look down,’ but you have to look down, you just have to. But it was scary, God! My son wanted to do it and I thought I had better go do it. He went up there like a mountain goat but when I was up there I was like ‘Ahhh!’”

Liam Neeson: human after all.