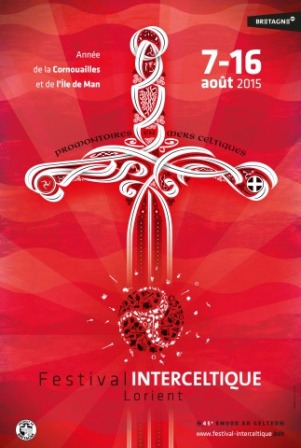 It’s a huge year for the Isle of Man at Europe’s largest Celtic festival, Festival Interceltique Lorient in Brittany.

Sharing the status of ‘honoured nations’ with fellow Celtic nation, Cornwall, this is the first time that the Isle of Man has been the main focus of the 45 year old festival. Isle of Man volunteer delegate, Ealee Sheard, has been working with the main financial supporter on the Island, Culture Vannin, to prepare an impressive showcase of all things Manx. IOM Arts Council has also provided a grant to ensure that the presentation is of the highest quality. The majority of the funding for the performers is coming from the Festival’s own budget and the whole presentation is a partnership between the Isle of Man and Cornwall.

A delegation of over 100 musicians & dancers will represent the Isle of Man, including Barrule, Ny Fennee, Ruth Keggin, Rushen Silver Band, Caarjyn Cooidjagh, Russell Gilmour, Strengyn, Mec Lir and many others. Attracting over 800,000 visitors and 325 journalists from all over Europe, the 2015 festival will centre around a pavilion and stage presented by the Isle of Man and Cornwall. Key events are televised to millions across France. Peter Young from Event Management Solutions is managing the pavilion presentation for Culture Vannin, and has been working with the Cornish delegation to design a venue which will represent both the unique and shared qualities of our two nations through food and drink, culture, heritage, language, arts and crafts, and tourist information. The pavilion stage will have a packed schedule of Manx and Cornish acts, some of which will also be involved in officially programmed performances in other festival venues. There will be two major Manx/Cornish gala events in the Grand Theatre and Espace Marine, and a featured segment within the popular Nuits Interceltiques – an extravaganza of music, dance, film and fireworks. The Festival committee has also planned a TT themed event, which will attract riders from the region, so a really broad cross-section of Manx culture will be promoted. Angela Byrne, Head of Tourism, visited the festival last year: “Just walking around the festival, it’s the energy, it’s the whole eclectic mix of so many different nations that have come together under a common theme – it’s fantastic, I’ve never been to anything like it!”

Four visual artists from the Island will join four from Cornwall to present a contemporary art exhibition which centres on the theme of mythology – heroes and legends, past-present. The four Manx artists are Juan Moore, Julie Roberts, Eileen Schaer and Will Sutton, whose work has been selected to complement that of the Cornish artists. The exhibition is being jointly curated by Manx artist Nicola Dixon and Cornwall’s Vivienne Gillard.

A steering group across government brings the expertise of Tourism (DED), DEFA and MNH to help structure and support the presentation. Local food and drink suppliers and other businesses have also been very supportive. The joint Manx-Cornish pavilion team aims to leave a legacy from the festival, in that they are effectively testing the market and supply line for Manx and Cornish produce into Brittany and France, with potential for future development.  Overall, this year’s presentation represents a working partnership between the Festival Interceltique de Lorient, Culture Vannin, the IOM Arts Council (DEC), DEFA, DED, MNH and local businesses on the Manx side and Cornwall Council and the Cornish Language Partnership in Cornwall. IOM Steam Packet have also generously offered sponsorship on IOM-UK travel.

Chairman of Culture Vannin, Hon Phil Gawne MHK, said, “Lorient 2015 represents an amazing opportunity for the Isle of Man to showcase our culture to huge audiences. This is the time to promote our beautiful and inspiring country across Europe and worldwide, showing that we have a vibrant independent spirit as a nation.”