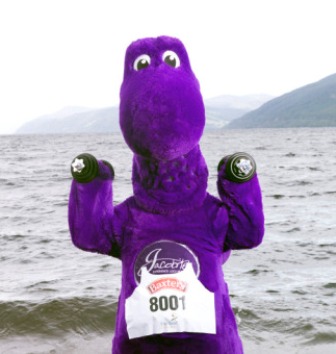 With a straight face, the Baxters Loch Ness Marathon & Festival of Running bills itself as a “monster race.” And why not? After all, the race runs right past the Loch where one of the most celebrated sea creatures of all time is rumoured to live. This year the popular event is introducing a twist: the Clan Challenge. Scots, expats and runners with Scottish ancestry are invited to represent their clans and “show who has the fastest feet in the Highlands.”

The Clan Challenge is part of the national celebrations from the Year of Homecoming Scotland 2014. The challenge will be determined by the number of runners from each clan in the races. From Macdonalds to Macraes and Camerons to Campbells, dozens of clans will be represented in the both the marathon (42.2 km) and the River Ness 10 km. on September 28.

Race director Malcolm Sutherland says he hopes that proud Scots from around the world will participate in the races and wear a touch of tartan on their running kit. “We are urging Scots at home and abroad or anyone with an affinity to Scotland to come and help push their clan to victory.”

He adds, joking, “We want to discover whether the Macleods are faster than Macraes and find out about the far-flung places you are coming from to represent your clan.”

The results of the 2014 Clan Challenge will be based on the numbers of runners from each clan who successfully complete either race.

Race day includes other distances besides the iconic marathon and the River Ness 10 km. A 10 km corporate challenge, a five-km race and a “Wee Nessie” run for children are all available. Last year more than 9,000 people took part in the Festival of Running.

Sutherland notes that runners came from all over the UK as well as 30 different countries to participate in the Festival. “We hope that the Clan Challenge will see even greater numbers come forward this year,” Sutherland says.

“It’s a fantastic day for serious runners and those taking part in their first mass-participation event and the atmosphere is always electric. We hope that the added element of the Clan Challenge will add to the feel-good factor.”

The extremely scenic route for the full marathon begins on high ground between Fort Augustus and Foyers, before dropping down to run alongside the Loch Ness. It’s not been reported if any runners have actually caught a glimpse of the Loch’s famous inhabitant while taking part in the race.

Runners proceed along the Loch’s southeast shore, heading northeast toward Dores at the north end. From Dores, the race heads directly into the centre of Inverness for the finish.

“The Loch Ness Marathon is a fantastic opportunity for runners to enjoy the beautiful scenery and iconic landscape that the local area has to offer,” says finance secretary John Swinney. “The marathon will also celebrate Scottish ancestry, with Scots from home and abroad to represent their family in the Clan Challenge.”

The two months are jam-packed with events, including the World Sheepdog Trials, the Inverness Highland Meeting and the Royal National Mod. The latter is Scotland’s premier Gaelic festival of language, arts and culture and includes everything from literature awards to concerts and Highland dancing.