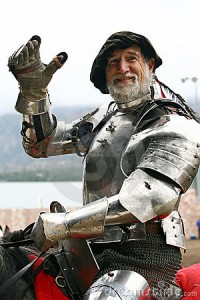 What is your own ethnic heritage/background?
I am Scots/Irish/Welsh by heritage. Both of my maternal grandparents were born in Scotland, and great grandparents on my father’s side were from Wales.

How has it grown over the years?
The festival has grown from 4 families and a picnic, to arguably, the largest Scottish/Irish Festival in North America with world class performers, competitions and entertainers.

Who attends the gathering?
People from all ethnic backgrounds attend the Festival every year.  There is something universally magic about hearing the strains of bagpipes!

What can they expect to experience this year?
This year, guest bands that will be both at the Tattoo and on the Festival grounds, are the World Champions Lothian and Borders Pipe Band from Edinburgh, and the Scottish Power Pipe Band, US Air Force Drill Team, US 1st Division Marine Band, 4th Division Army Band, Halifax Citadel Regiment WWI Reenactment, Texas Camel Corps and more! Entertainers both on the Festival Field and at the Estes Celtic Concerts are traditional folk musicians Seamus Kennedy, the Brigadoons, Giants Dance, & Sligo Rags. Estes Celtic Rock Concert features Albannach, Arvel Bird, the Black Irish Band, and Highland Reign.

Why is it an important event for the Celtic community there?
There is a lot of Celtic history here in Estes Park. Many of the early settlers came from Scotland, Ireland and Wales. So that fact enhances the interest for current Estes Park residents to learn more about their heritage.

What are the plans for the festival in the years ahead?
Plans for the Festival in years to come are to continue to offer a world class experience for all who come. Also to teach future generations about their heritage in the hopes that the history and the stories of our ancestors will be kept alive for everyone.

Is enough being done to preserve and promote Celtic culture in the U.S and around the world?
I can only speak from our Festival’s perspective, but I’ve been told that our Scottish games (and others like it here in the U.S.) are much better than the games in Scotland! Better in the sense that there is more emphasis on promoting and preserving the Celtic culture, more events and more interest in genealogy by American Festival participants.

What can we be doing better?
The best way, I believe, to improve on what we are already doing, is to support Scottish and Celtic events in our areas, and to encourage everyone to find out what the Celtic heritage is all about.

Are young people still interested in Celtic culture?
The Longs Peak Scottish/Irish Highland Festival is a good example of young people being involved in the Celtic Culture. Every year we select an Honored Youth of the Festival and give them special recognition during the weekend. The youth is chosen from the many who attend the Festival every year with their families. Our Highland Dance venue has between 60 and 70 competitors and the Irish Dance venue has between 450 and 500 young ladies who compete for prizes every year. They are both very popular events, and of course, many young dancers’ first exposure to dancing was when they watched the Irish and Highland dancers compete at the Festival. Another area that young people are attracted to at the Festival is the Dogs of the British Isles. They are fascinated by the talents of these trained canines, and new last year, there is also a dog adoption area available where the kids can actually bring home their very own pup!