LORD OF THE DANCE 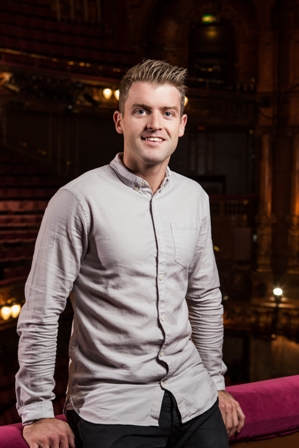 James Keegan is happy to have the day off.

“I am doing all the little things that I don’t normally have the time to do,” shares the 28-year-old Irish dancer by phone from London; “errands mostly – making a few calls, shopping, cleaning – that sort of thing. Today I am the lord of the laundry.”

The native of Manchester sighs, before chuckling at the reference to his decade-long run with world-renowned stage spectacle Lord of the Dance.

“Actually, what would really make me even happier right now is a nice full pint,” he confides with a grin. “Maybe I’ll slip out for a couple of hours, find a pub where I can put my feet up, and put down a Guinness.”

Keegan’s Celtic roots are showing; with both his mother and father hailing from the Emerald Isle – County Leitrim and County Roscommon specifically – a thirst for the “black stuff” is completely understandable – even expected.

“Manchester, like Liverpool, Blackpool and Blackburn, has a huge Irish population,” he explains of the northwest U.K. “Generations of people from all across Ireland crossed the water for work, and those communities are still very present. Really, I might as well have grown up in Dublin.”

Amidst that milieu, it was natural that Keegan would take up Irish dancing.

“I was only four-years-old when I began attending the Lally School of Irish Dance, so I’m not sure I had much choice in the matter at the time,” he laughs. “All I knew was that I liked it right away, and that it made me happy. It still does.”

Unlike so many youngsters now involved with the sport, at no time did his parents pressure him to pursue the pastime, let alone succeed at all costs.

“They were supportive from the very start,” he shares. “They would drive me to and from classes and competitions, and give me the time and space at home to practice in private. My family always encouraged me to follow my dreams. They still do.”

Keegan’s swift rise through the ranks is a testament to his own dedication and discipline. The drive and determination paid off quickly, and he consistently placed top-three at local and regional Feisana in his first two years of competing. At the age of 7, he won his first title at the American National Championships. Over the next few years, his trophy case would fill up fast, winning a total of 4 American National, 8 British National, 9 Great Britain, 3 all Ireland, 1 European and 2 World championship titles. In 2000, he won every major title that could be achieved competitively in Irish dancing.

“I remember one week winning the World Championships and flying home and three days later I had a trial with Manchester United,” he told the Irish Post last year. “It was a mad one because as much as I loved the dancing, I loved the football and it was looking like I was going to have to make a decision. The fact that it was there within my grasp, I had to give this a go, but I ended up breaking my leg. That put me out of action for about a year, so the football kind of fell away because of that.”

As it turns out, one sport’s loss was another ’s gain, and it wasn’t long after recouping from his injury that Keegan was scooped up by Michael Flatley of Riverdance fame for a new production called Lord of the Dance.

Less than a year into performances, Keegan was asked to take on the lead role, making his debut as Lord in South Africa. Since then, he has graced stages in the USA, Mexico, Egypt, Dubai, Russia, Asia, and all over Europe, performing for the likes of Prince Charles and the royal families of Abu Dhabi and Dubai. One of proudest moments came in 2010, when he showcased in his hometown.

“I had always dreamed of dancing in Manchester arena,” he recalls, “and when it finally happened I was very nervous, especially with all my family and friends there.”

Keegan credits his boss for keeping him cool that night.

“Michael has been an incredible influence on me. Not only is he the consummate professional, but his passion and intensity for dance – and for learning dance – is infectious. He can be tough at times, yes, but he is always fair. He has brought out the best in me as a dancer and as a person, and working with him has continuously brought my game to higher levels. It still does.”

Flatley’s influence can now be felt in Manchester, where, in 2011, Keegan and his sister Louise – herself an accomplished dancer – opened the Keegan Academy of Irish Dance.

“I suppose it is one way that we can give back to our community,” he says. “Both of us were quite fortunate to have had the chance to be involved with dancing as youngsters – it kept us physically active and out of trouble – and we wanted to afford young people back home the same opportunities. At that age, taking dance lessons is as much about making friends and being a part of something bigger than yourself as it is about the sport. I know it was for both Louise and I. It still is.”

Working with youth will likely be a part of his future, once his professional dancing days are behind him.

“It is extremely rewarding,” he says. “Even now, with this production, I really enjoy being able to share my experience with some of the newer cast members. Passing on the tradition of Irish dancing, being a link in that chain, is something that I can see myself doing for the rest of my life. That is, unless Manchester United comes calling again. To be honest, though, I haven’t really thought that far ahead. Right now, I am happy with where I’m at, and I’ve got my hands full these days.

“And I’ll be even happier once I get my hands on a full pint.”