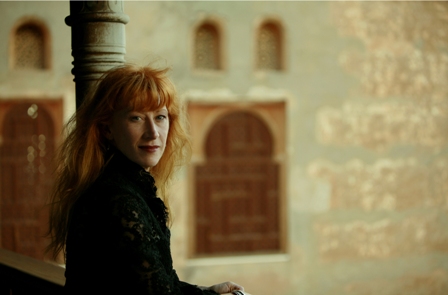 “I am honoured to be in such esteemed company.” Loreena McKennitt smiles at the idea of appearing alongside television celebrities Kevin Spacey and Michelle Monaghan in our publication.

“And I am somewhat surprised,” she continues in earnest. “I’m not sure what I have done to deserve this kind of attention, but I’m not complaining!”

And neither are her fans, who number in the millions after three decades of McKennitt’s bold and breathtaking Celtic melodies.

“I’ve had to pinch myself as of late,” confides the multi-award-winning artist. “Time passes so quickly, it slips through the hands like sand. It’s hard to even wrap my head around the concept of 30 years sometimes. I guess I have been too busy enjoying myself to notice.”

That joy is evident on her recently released anthology, The Journey So Far – The Best of Loreena McKennitt, a double disc set that includes 12 classic tracks, as well as nine new live songs recorded in 2012, all handpicked by McKennitt herself.

“It was quite a process actually,” she notes. “After three decades, I had a lot of material to choose from: the singles, my personal favourites, songs that perhaps best represented or reflected who I was and where I was at during certain points of my career. In the end I was very pleased and proud with the selections. They each stand on their own, yet work well alongside the others.”

The same can be said for McKennitt’s entire creative canon, which debuted with 1984’s Elemental. Since then, the Stratford, Ontario, native – who was born and raised in neighbouring Morden, Manitoba – has released nine studio and five live recordings.

Along the way she found the time to release several DVDs, produce a documentary film, contribute music to a variety of cinematic and television projects, lend her voice to a number of notable causes, receive a myriad of honourary doctorates and degrees, be nominated for and win an array of awards, tour the world repeatedly, showcase at the Olympic Games, and perform for regulars and royalty alike.

Driven by a lifelong love of learning, McKennitt digs deep into research as part of her creative process. “For the first couple of recordings I immersed myself in Irish culture, travelling there for inspiration and absorbing as much information as I could through books, movies and music,” she recalls. “The same process was in place for the work I did in the 1990s, and you can hear both the Spanish and Arabic influences in those albums.”

Subsequent trips to Greece, Cyprus, Turkey, Lebanon, Hungary, Italy and other global destinations have also woven their way into her work.

“It’s impossible, as an artist, not to be affected by those experiences. Our natural tendencies are to absorb what we see, smell, taste, touch and hear, process these things internally, and then try to recapture them in our art. What I find most fascinating is the individual interpretation of these experiences. Two artists may visit the same place, have the same meal, or meet the same people and walk away with completely unique and differing perspectives.”

Given her exposure to, and her immersion into Celtic culture, McKennitt’s perspective is more than authoritative – it is enlightening.

“I think at one time my ideas of what it means to Celtic were quite defined and almost stereotypical with regard to the history and heritage. Over my career, as I have had the good fortune of travelling and connecting with people around the world, I have come to understand that Celtic culture is a living organism that has evolved naturally and organically. As people of Celtic origin continue to engage and pollinate with others of other backgrounds, an entirely new cultural species is emerging. You might even call it Cross-Celtic.”

Toss in technology, she continues, and the possibilities are staggering. “For the first time in our history, there exists the ability for Celts to connect and converge as a culture. The Celtic Diaspora is no longer confined to a specific geographical area; it now exists in cyberspace, comes in different colours and speaks many languages.”

As such, McKennitt now considers herself to be a thread in the growing, global Celtic mosaic and thus, a citizen of the world. “Wherever I travel, it is the incredible and generous people I meet that make all of my creative efforts and endeavours worthwhile. I love my audience, they are a family of sorts, and they have been very good and generous to me, affording me a career that I love and the opportunity to live and grow as an artist and as a person.”

-McKennitt’s parents are of Irish and Scottish descent
-Growing up, she dreamed of becoming a veterinarian
-After learning the Celtic harp, she busked on the streets of Toronto to finance her first recording
-To date, she has sold more than 14-million albums worldwide
-In 1998, McKennitt founded the Cook-Rees Memorial Fund for Water Search and Safety after losing her fiancé in a tragic boating accident earlier that year. To date, more than $3 million has been raised for education, research, training and equipment

The Journey So Far ~ The Best of Loreena McKennitt

Unlike too many greatest-hits packages, this collection doesn’t date itself. From The Mystic’s Dream to Down By the Sally Gardens, Marco Polo, The Lady of Shalott and Dante’s Prayer, McKennitt’s tone, timbre and talent prove timeless. In particular, Penelope’s Song, The Mummer’s Song and Full Circle sound as powerful and poignant today as they were when first released, and as they will 30 years from now. There’s something for everyone here; a strong sampling of songs for those discovering her magical melodies for the first time, as well as new live takes on older tunes that will surely satisfy longtime fans.