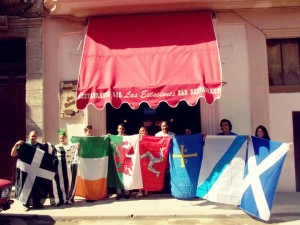 Old Havana is a cornucopia of culture; a city of over 2 million people that has a rich and diverse history and heritage, the Cuban capital is an onslaught of sights and sounds that will overwhelm the senses of even the most seasoned traveller.

There, along the narrow Calle Amargura (between Calle Cuba and Calle Havana) sits Las Estaciones paladar bar- a small lounge that is quickly becoming popular with both Cubans and visitors from all countries.

Las Estaciones is one of those special places in Cuba where foreigners can enjoy a delicious meal and a drink, mingle with locals, try out a few Spanish phrases and make new friendships.

“Our clients are from everywhere,” shared co-owner Maria Elina Marín via email. “Cubans, foreign people, young people, old people…it is a very diverse group of patrons. And we are very happy to say that, in almost one year of operations, we have not had a bad client!”

A paladar bar is vastly different from the larger, state-owned and controlled restaurants. As a privately run business, it usually provides better and less-expensive food, and offers stronger customer service in clean and comfortable surroundings.

Originally from the Spanish Canary Islands, Marín and her partner Julio Curiel
opened the doors of their establishment just a few weeks before CeltFest Cuba in 2012.

“The place was a ruined old store that we converted into a pub,” she explained.

The couple’s passion for Celtic culture became core to the locale’s mandate.

“From the very start, we wanted to support the Celtic arts here,” she noted, “and so we began hosting regular events during CeltFest last year.”

The nightly jam-sessions proved so popular with local players that, after the festival ended, a group of Cuban-Celtic musicians opted to carry on with the informal get-togethers; meeting there on Monday and Wednesday evenings, a handful of pipers, fiddlers, singers and dancers commemorate Celtic customs with jigs and reels.

The Caribbean nation has a storied connection with Ireland that goes back hundreds of years (see our story on the Irish in Havana in this issue). And, while that relationship has remained, it hasn’t always been easy for Cubans of Celtic descent to celebrate their ancestry.

Canadian fiddler Maria Watson remembers an ill-fated attempt to host an initial session at a state-owned bar during the first CeltFest in 2010.

“We had asked the bartender if we could play a few acoustic tunes and he cheerfully agreed and we played some music. The bartender liked it. The other patrons liked it. We had only started the third or fourth tune when a military man swept in and angrily demanded that we stop. The session came to an abrupt halt. We packed up our instruments and, as we left, the bartender gave us an apologetic look, but there was very little he could do. That particular bar was not an authorized music venue, and the uniformed official was not going to make any exceptions.”

It was a very different experience on her most recent visit to Cuba this winter.

“Las Estaciones is much more free-spirited. There were many Cuban musicians performing the evening I arrived.  A harpist named Cynthia Coto Picart was there with her mother, Gina Picart, a writer of Celtic-themed Cuban books. Will Calver, the tall handsome Cuban gaitero known as the “Ebony Piper” dropped by and played his Galician gaita. The duo “Sean am”  (Angélica Góngora and Luis Gutiérrez)  played fiddle and bodhran. And the fabulous Cuban bagpiper Alexander “Winnie” Suarez Mendez performed with his Uilleann pipes.

Recently, the restaurant was named by Celtic Life International as the Best Celtic Pub in the Caribbean for 2013. The award was presented to Marín and Curiel at a special ceremony this past St. Patrick’s Day.

The celebrations continue on April 6, as the venue hosts its first Tartan Day festivities, and also later in the month during this year’s CeltFest, April 13-20.

“The Celtic artists love the atmosphere of the pub,” said Marín. “The place, the people and the music are a fantastic mix you cannot find at any other place in Cuba.”