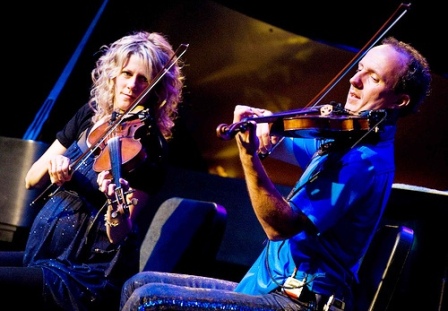 Donnell Leahy is no dummy; like most married men, he knows his place.

“I’ll put you over to Her Majesty,” chuckles the Cape Breton fiddler on the phone from Davis, Florida.

No, the Queen of England isn’t wintering in Florida; rather, it’s a very down-home, low-key Natalie MacMaster who picks up the line on the other end.

“Donnell just called you Her Majesty,” I note. “Do I refer to you that way as well?”

“Absolutely,” comes the drop-dead reply in a distinctly Cape Breton accent. “No, no,” she then smirks, with a touch of mischief.

Yet, you could make the argument that MacMaster is indeed royalty: Queen of the Celtic fiddler players, who began recording at age 16 with her debut album – Four on the Floor – and who now has three decades of experience, 11 recordings, and thousands of shows behind her.

She even has the family pedigree of royalty: her Uncle Buddy, who passed away at the age of 89 last summer, is considered the King of the Cape Breton fiddlers, while cousin Ashley is a firebrand Prince who married traditional island fiddling with rock music and took it to New York City’s Carnegie Hall.

MacMaster and her husband – himself a renowned fiddler,and frontman for the very successful band of siblings “Leahy” – are currently on a 60-city tour.Though they are not actually playing at being Canadian snowbirds down south, Donnell jokes that they are trying to delay their departure from the Sunshine State as long as possible.

“We understand you folks are fighting the fight out there,” he comments, referring to the record amount of snowfall that’s blanketed Nova Scotia, including Cape Breton, this winter. Clearly, he and MacMaster are thankful to have missed the ice and cold as they tour in support of their new recording, One.

The title “One” is nothing if not apropos. It’s the first time MacMaster and Leahy have recorded together, something the latter said they had planned on doing since getting married twelve years ago. For one reason or another the occasion kept getting put off. He attributes the delay to different schedules and, jokingly, “the fact that there’s a baby born every day now in the family,” a reference to the couple’s six children.

Although the pair has frequently performed together, it didn’t always add up to a harmonious sound – the fiddlers’ styles are different, according to Leahy, and sometimes they cancel out one another’s nuances.

What they did learn was that when they arranged tunes together, they ended up at something more equitable. “Writing music with one another has been great,” Leahy notes, “because naturally, from the beginning of the song, you’re not stepping on each other’s toes.

“Of course, we have played together a lot; on tour, at house parties, and elsewhere. And, after 12 years of living together, I think we have figured it out.”

MacMaster elaborates on the recording sessions for One. “There wasn’t a lot of struggle, and things came together pretty easily. There were a number of tunes that we had been playing live for a while, and of course all the little kinks just sort themselves out after playing them on stage for years.”

Leahy agrees, dismissing any idea of marital stress while in the studio. “Not recording, no. Wall-papering, yes, but not recording,” he jokes.

In fact, the fiddler notes that the studio sessions marked the first time in years the couple was able to leave their children for a week-and-a-half and concentrate on making music. “We were able to really focus and create, so there was no stress at all. We had also learned, earlier on in our relationship, that we have similar taste in music, and we sort of hear it in the same way. We like what the other one likes. That made a big difference.”

More than marking the first time the couple has recorded an album together, One boasts another first: veteran music producer Bob Ezrin was at the controls, shaping the final sounds. The Canadian music producer is famed for having worked with the likes of Lou Reed, Alice Cooper, Kiss, Pink Floyd, Peter Gabriel and Phish, among many others.

Ezrin will also produce a Christmas album that MacMaster will start recording in June.

“Bob brings an immediate reaction, and it’s the right reaction [to the music],” she asserts. “He’s efficient and confident and he knows how to make things happen. He is wonderful to work with and I trust his musical sensibility.”

Ezrin isn’t the only big name on board these days; producer Justin Cortelyou also worked on the new CD. Cortelyou’s credits include Taylor Swift, Ke$ha and Alan Jackson.

Clearly, MacMaster and Leahy had fun making the recording. For the very first time, she sings on a song, the vocal lament titled “Cagaran Gaolach”. On “Fiddler’s Despair”, she takes a page from her cousin Ashley, with a couple of up-tempo distorted guitars driving the song’s momentum. And two players share one piano on “Pastiche for Anne”. Just to round things out, the tune“Joyous Waltz” features a drum set made out of a cardboard box and paint cans.

MacMaster says One is definitely a rockin’ record, but points out that most of the same basic elements can be found in her past works. “It’s both a continuation and an evolution of sorts, really…maybe just a higher quality version.”

According to Leahy, the couple didn’t plan to create an album that specifically sounded contemporary or traditional. In fact, they really didn’t have anyparticular genre in mind. Instead, the pair brought their individual musical tastes and interests, and let the music dictate what came about, organically. “It is diverse, and I think that reflects our playing styles,” he says. “We didn’t take the approach that, oh, we need another fast tune or there’s not enough slow stuff on there. We just picked the material, and it was all quite honest and natural.”

It goes without saying that MacMaster also chose to pay tribute to her uncle Buddy on the recording with a couple of different songs. Of one tune, she says, “That was the easiest, simplest, most fluid track we did. We just gathered a bunch of people to sit there and play tunes for Buddy. We didn’t even know what we were playing.

“We put it together in the studio and we got it in one take. It came together so quickly that we said, ‘Well, we’ve only been playing for five minutes. Some guys drove two hours to be here, we might as well put something else down.’ So we threw some more tunes together and – boom! – first take.”

She notes that they didn’t intend to keep both tracks originally, each of which featured six fiddlers, but ended up including one as a bonus song on the record. “I’m sure the spirit of Buddy was there with us,” she recalls of the Cape Breton sessions.

Now, deep in the southern United States, Cape Breton seems a long way away. However, as they often do, the couple have practically brought their home with them on the road. All six kids are along for the tour, which began in Akron, Ohio and will continue through to California. “We’ve traveled a lot separately in the past,” Leahy notes, “but to be on tour with the whole brood, we have home with us, so it’s wonderful. We’re not missing the kids or worried about them. It’s all good.”

On the road, the kids are homeschooled, as they always have been, and the family eats at restaurants, although MacMaster does the cooking when they’re home. It is quite a challenge to balance touring, composing music, lessons, family life and more, and MacMaster concedes it’s a handful. “People say, gosh, how do you do all that?’ It’s pandemonium. But that just our reality and I’m used to it, and this is our life and we just do it and don’t think about it.”

To be sure, she wouldn’t have it any other way. Her husband and children are the best and biggest part of her life these days, and the only things more important to her than her music. She notes her recordings normally come about two years apart, but this one took three. “My life is different right now because my music is not my baby. My children are my baby, so it just takes longer.”

MacMaster acknowledges that she’s not as efficient as she once was, and doesn’t pump things out as easily or quickly as she once did. “It takes more effort, for sure, just by nature of being a mother of six and running a home. I don’t have 24 hours in a day to dedicate toward music anymore; I have 24 hours in a day to do laundry, help with lessons, juggle meals, all that stuff. I mean, there is only so much a person can do in one day. Still, somehow we always manage to find time each day to make some beautiful music together.”