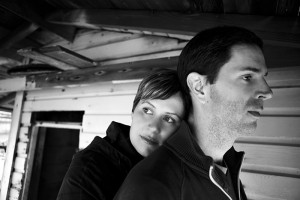 It is said that the couple that plays together, stays together. For husband and wife James and Kylie MacHattie, working at The College of Piping and Celtic Performing Arts in PEI doubles the fun.

What is your own ethnic heritage/background?
James: My background is almost completely Scottish. The MacHatties came from Banffshire to Pictou in the late 1700s.
Kylie: My background is Scottish. My father was born in the north of Scotland in a town called Dornoch and then when he was a little boy they went south to Leeds, England. He was in the merchant navy and then immigrated to Canada.  My mom’s side of the family is English but her family has been in Canada for generations. My dad’s accent is English but he’s more Scottish than most Scots!

How long have you been involved with the college and in what capacity?
James: I have just passed the two year mark of working at The College. My title is Director of Education, so I develop and oversee the curricula and educational programming of the four core disciplines taught here: piping, drumming, highland dancing and step dancing. I also teach piping, instruct the two pipe bands and am the Pipe Major of the Grade 3 band. And as this is a smallish, not-for-profit organization, I also do a little bit (and often a lot) of everything else that is needed to keep The College operating – performing, fundraising, general labour, marketing, writing… All full time faculty and staff wear all sorts of different hats!
Kylie: I started at the College in September 2010 and I am one of two bagpipe instructors. I am also pipe sergeant of the Grade 3 pipe band and I also help instruct our Grade 5 pipe band.

What are the challenges of the job?
James: It is really an all-consuming job – which is great since I love what I do. However life balance is not always the easiest to find since my hobby/passion is also my occupation. The time commitment is huge – very long days and most weekends.
Kylie: I think the hardest part about the job is the unconventional working hours.  It’s not a typical 9-5 job because the teaching hours are scheduled around after school hours. Another challenge is getting students and parents to realize how big the piping/drumming/band community is worldwide. Most of our students have only competed in Atlantic Canada. The trip to Scotland this year will be a great way to show them how big the community actually is.

What are the rewards?
James: I love what I do! Watching the progress of students as they improve and grow is incredibly rewarding. Helping them to work through disappointments and to overcome obstacles is as important as helping them to achieve success.
Kylie: There are too many to list! One of them is how we’ve become mentors not just in what we teach but in life. Another is working with our students and seeing the improvement from week to week. We try to set goals and a lot of the time they surpass them which is really cool to watch. A big reward is that I now make a living from my hobby. Not a lot of people actually earn a living from what they really truly love to do. Another is the life lessons the kids learn from competition.  We try to instill that it’s not about the prizes but it’s about the performance. If you put out a performance that you are happy with, that’s all you can ask for. It’s a hard lesson to learn but one that I think is important.

What can attendees expect to experience during this year’s Highland Gathering?
James: Sensory overload! Pipes and drums everywhere, flashes of bright colours, graceful movement of dancers, a din of conversations in the refreshment tent when old and new friends meet, Celtic demonstrations in various corners, kids’ events, Barra MacNeils concert, Acadian music, fiddle music, Scottish country dance, Gaelic song…
Kylie: Attendees are in for a treat! I think our Highland Games are really one of a kind because we have a step dancing competition taking place on the Friday. As far as I know we’re the only Highland Games that offer this in Canada. This year we have the Barra MacNeils on our amphitheatre stage on the Friday night. We have two full days of piping, drumming, pipe bands and highland dancing. We have a fantastic line up of east coast music for our beer tent. We have fabulous vendors such as the MacIsaac Kiltmakers and their very talented daughter, Veronica (of Veronica MacIsaac Apparel) coming. We have children’s activities.  We have put a lot of thought and consideration into our gathering and I think that is reflected in it.

What can they expect during the run of Highland Storm?
James: This year’s show should take the audience through an emotional journey – sure that sounds a bit corny, but it’s true. I think the set list is well crafted to get people fired up during the energy of the reels and hornpipes and will pull them back during the haunting of the airs. Our four core disciplines are highlighted on stage.
Kylie: People can expect a really unique experience when attending Highland Storm. One of the things that I love about Highland Storm is that almost all of our performers are either current or past students. I have some students who can’t wait until they are experienced enough to perform in it. It’s a great goal for the kids to have. The show this year has a great mix of traditional and modern Celtic music. Some of the music was written by James, and some of it was written by Ryan MacNeil. Highland Storm really showcases our four core disciplines extremely well. It’s upbeat and there are some surprise numbers that I think the crowds are going to enjoy a lot.

Are young people still interested in Celtic culture?
James: I’m not sure how well I can answer that because all the young people I know are here at The College or are pipers, drummers and dancers – and they are immersed in Celtic culture!
Kylie: I do think so. Recently I attended a concert where high school music students had written their own compositions. Each student had a mentor and that mentor gave them some suggestions. One of the suggestions was writing with Celtic aspects. I was pleasantly surprised that so many of them had chosen to try their hand at a composition with that in mind. It was great to hear! One girl was absolutely giddy that she was allowed to compose music in her favourite genre!  Having moved from the west coast to here I would have to say that young people on the east coast embrace their Celtic culture much more than anywhere else in the country. I have a nine year old student who wears his Glengarry to his lessons!

Are we doing enough to preserve and promote Celtic culture?
James: The College works hard every single day to do so, so I hope we are doing our share! We take care to remember that the Celtic traditions are living traditions, and not static – not a snapshot of how it once was and must always be. In order to preserve and promote Celtic culture I believe we must evolve and adapt while staying true to tradition, and I believe that is happening in many places worldwide.
Kylie: I think we do and we don’t. So many people are very proud of their Celtic roots but then you see Highland Games just barely hanging on in terms of being able to make a profit to afford to hold them again the next year. Events like Celtic Colours do definitely promote and preserve Celtic culture. It would be nice to have more festivals (selfishly speaking!) in the Maritimes and the rest of Canada.  It would be nice to have a bigger presence in the school systems. In BC you can get school credits for playing the pipes or drums. It would be nice, especially inPEI where we are lucky to have the College of Piping, to be able to get those same credits. A lot of time and dedication is put into these instruments outside of school.

What can we be doing better?
James: That’s a tough question.PEI is so very rooted in Celtic traditions that I have no concerns about it thriving. I have lived in Saskatchewan, Ontario and BC for lengthy times, and there are very strong pockets of Celtic-ness in each place.  Youth pipe bands and schools of dance are very important not only for the teaching element and introduction to the culture, but all sorts of Celtic based events become attached to these organizations – for example Robbie Burns Nights as fundraisers introduce young people to Scottish poetry (and haggis!!!).  We need to make sure we support programs for youth which keep it fun and rewarding as well as educational.
Kylie: This is a hard question to answer considering my job! I think reaching young people and being able to promote the culture to them. I think we need to evolve with the culture as well. A lot of what we do (piping, drumming, dancing, bands) is based on tradition but that tradition is evolving. If you get too stuck on the staunch traditional element, you are going to lose people. This rings true when reaching the younger generations.