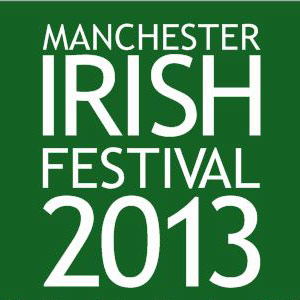 This years’ award winning 2013 Manchester Irish Festival celebrates its 18th Birthday. The ten day Irish cultural extravaganza with over 200 events at 100 different venues is now firmly established as Europe’s biggest Irish Festival outside of the Emerald Isle. An estimated 200,000 visitors from all over the UK and Ireland will descend upon Manchester for the event which runs from March 8-18. Press Officer Tony Hennigan fills us in on the details.

What is the event’s core mandate?
The Festival is a celebration of the City’s Irish Culture and to develop links to Ireland. This year we have been working with Dublin’s Templebar Tradfest and we have organized our own 9 Day Manchester-Mayo Gathering in Ballina in County Mayo which takes place from the 1-9 August. The Gathering is a flagship event for the 2013 Gathering in Ireland and has won support from the Irish Prime Minister.

How has it grown over the years?
Yes it has grown into Europe’s biggest Irish Festival with a ten day festival involving over 100 venues throughout Greater Manchester from 20,000 capacity stadiums to 50 capacity pubs.

Who attends the gathering?
We get visitors from all over the world, as far away as Australia, over 200,000 people usually attend the annual celebration

What can they expect to experience this year?
It’s a mixture of Irish Art, Comedy, Culture, Craft, Dance, Theatre and Sport. From headline grabbing gigs from the likes of The Script to free traditional Irish music sessions, there is something for every pocket and taste. This year the festival has teamed up with the 2013 Gathering in Ireland and there are lots of events planned to promote the year long festival in Ireland and develop links with different parts of the Country.

Why is it an important event for the Irish community there?

The Festival leads up to St Patrick’s Feast Day – the 17th March and everyone in Manchester which is home to 101 different cultures becomes Irish for a day.

What are the plans for the event in the years ahead?
Not that we are known as Europe’s biggest Irish Festival, we would like to grab the World crown outside of the Emerald Isle.

Is enough being done to preserve and promote Irish culture?
There is a large Cultural programmed which includes working with the Schools in Greater Manchester, where children as young as 6 get to learn how to play the tin whistle or dance a jig or say hello in Gaelic.

What can we be doing better?
The Festival is run by a team of volunteers; it is funded by contributions from the Irish community and a number of main sponsors. If more sponsors came onboard than the programmed could move onto the next step. We are very keen to develop stronger links between Manchester and the Diaspora around the world, along with linking back to Ireland. So far we have linked up with the Diaspora in Australia, Canada and America along with direct links to Dublin’s Temple Bar and County Mayo.