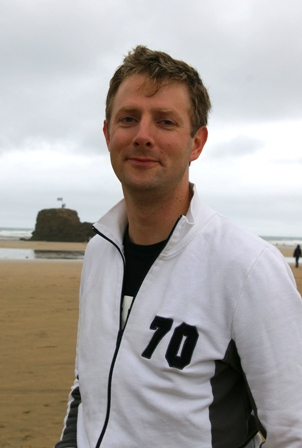 Cornish speakers, learners and the culture-curious can now immerse themselves in the ancient Celtic language thanks to veteran broadcast journalist Matthew Clarke.

His weekly one-hour podcast features classic and contemporary Cornish music and news. The show attracts 400 listeners each week online, and is broadcast on four regional community radio stations as well.

Clarke lives in Camborne, a West Cornwall town that was once a centre for the Cornish tin and copper mining industry. He began his career in commercial radio as a professional broadcaster 20 years ago. Today, along with his podcasts, he also puts in shifts for an area radio station, and has a hand in video production and public relations.

The 45 year-old is a renowned musician as well, having written and performed songs with his groups Krena and Skwardya. The former won the PanCeltic Song Contest a decade ago, while the latter has garnered global attention for singing Beatles’ songs in Cornish.

Producers of the American animated television show The Simpsons shone a spotlight on the language in a 2004 episode when Lisa Simpson shouted-out a Cornish phrase, compliments of Clarke’s translation

Interestingly, despite Clarke’s strong Celtic ties, he is reticent to discuss roots.

“I avoid talking about ethnicity or where people are from generally, because culture and language should not be about that. The Cornish movement is inclusive, and is about embracing those who support it, whether they are from Cornwall or from outside the country. When we start talking about background, history or heritage, it makes some people think the language and culture isn’t for them, when it is accessible to everyone.”

The current pool of fluent Cornish speakers is, by Clarke’s estimation, approximately 300.

“You can’t just phone up any organization, or stop someone in the street, and expect an interview in Cornish,” he notes. “The revival of the language is a voluntary affair, on the whole, which means that people are juggling their busy everyday lives with working on it.”

Clarke wrote news in Cornish online for many years, and was the webmaster for Kowethas an Yeth Kernewek (Cornish language fellowship) before starting Nowodhow an Seythen (Weekly News) and Radyo an Gernewegva (Radio of the Cornish speaking place). He says the scarcity of Cornish language speakers makes it challenging to get weekly contributions to his program.

“Though Cornish and traditional music is flourishing here in Cornwall, there is still a distinct paucity of music recorded in the Cornish language. There are some very positive points, though. For example, this year a Cornish group – The Changing Room – won the PanCeltic Song Contest for their song Hal an Tow.”

Perhaps the biggest challenge facing Clarke and his peers is a lack of proper funding.

“There is a small amount of financial support from The Cornish Language Partnership each year, and it helps. However, Cornish culture on the whole is given a pittance by the U.K. government compared with other minority cultures. Cornwall has to beg and scrape for that trifle every year, whilst trying to seem desperately thankful. Those who do work for the language are doing great things on barely zero funding.

“The rewards are really about satisfaction in wanting to provide something to help preserve and promote the language and culture.”

He adds that many listeners request transcriptions, but that is simply beyond his budget and resources. None of this stops him from being ambitious and optimistic, however, and he hopes to one day befriend a benefactor to finance more Cornish language projects.

“One of the other things we want to do is find a few million pounds to set up a trust and establish the first fully Cornish speaking community.”