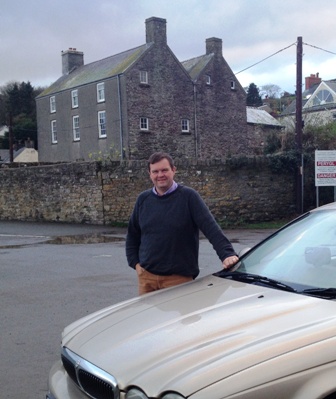 Dr. Michael Davies is an expert on Welsh history, a published author, a food and wine connoisseur, and the owner-operator of Dragon Tours. Recently he answered our Seven Celtic Questions.

What are your own Celtic roots?
Most of my Celtic heritage is from Wales. I was born in Wales and have lived here all my life, as did most of my immediate ancestors. I have traced my Welsh roots back to the 1600s, but believe that my Welsh ancestry goes back a lot further than that. I also have some Irish blood through my mother’s side of the family and some Scottish heritage on my paternal grandmother’s side. So I feel very Celtic indeed.

Why are those roots important to you?
My roots have always been of great importance to me. I grew up hearing stories of the old days from my grandparents and came to love Welsh history, which became a passion of mine that continues to this day. I also believe that it is very important to pass on my Welsh and Celtic heritage and so my son, Llywelyn, has a very Welsh name and is now bilingual in Welsh and English. The Welsh people are the direct descendants of the original Ancient Britons who made up the population of Britain when the Romans arrived almost 2000 years ago. The Welsh language and culture preserves an ancient tradition that has to continue.

What does it mean to you today to be of Celtic heritage?
For many people outside of the UK, “Britain” and “England” are interchangeable terms. If you are brought up Welsh or Irish or Scottish you know that although we share a land space with England, we have a more ancient, shared, Celtic heritage that is different and tangible. It is sometimes hard to explain. I believe that a lot of our Celtic nature is held in our subconscious. It is very important for people from Wales to be recognized as Welsh (as opposed to being confused with the English). We are British, we are from the UK, but we are Welsh (not English).

How are you involved with the Celtic community?
My five-year-old son goes to the local Welsh school. The teaching of the Welsh language is now widespread in Wales (you can choose to have your child educated through the medium of Welsh wherever you live in Wales and Welsh is a compulsory subject even in the English schools in Wales now). It is very important to preserve the language – one of the oldest spoken languages in the world and the most spoken of any of the Celtic languages. My business, Dragon Tours, provides small group tours of Wales and focuses on the history and culture of my homeland. I work closely with Visit Wales (the tourist board for Wales) and hope to encourage more people to visit Wales as we believe it is the ‘forgotten jewel’ of the British Isles and the Celtic Nations. I have written a number of books and academic papers on the history of Wales. Recently, my brother Sean and I, wrote a book about The Last King of Wales, an 11th century ruler called Gruffudd ap Llywelyn.

Why is it important to keep Celtic culture alive?
People of Celtic origin have a duty to preserve what has been passed down. So much has been lost: the Romans exterminated the Druids, the Anglo-Saxons pushed the Celts into the extreme west and north of Britain, the Normans invaded and settled, the English conquered and colonized and tried to eradicate the Celtic languages and culture. Yet we are still here and much has survived and flourished. We need to ensure that our heritage is not lost in this increasingly globalized culture.

Is enough being done to preserve and promote Celtic culture generally?
I am proud of the way that Wales has preserved its culture and language. It is officially a bilingual country. People fought hard for this. For many years the teaching of Welsh history, culture and language were suppressed or even banned. This situation has dramatically improved in recent times, but we must not be complacent. I think that Wales can be an example to other Celtic Nations in this respect. Sometimes Celtic culture can appear a bit twee or touristy, but if you come to Wales you will see and hear the language and culture in everyday life.

What can we be doing better?
I believe the key is the teaching of Celtic history in schools and the promotion of Celtic culture to the rest of the world through the various tourist agencies, tourist businesses and Celtic interest publications.