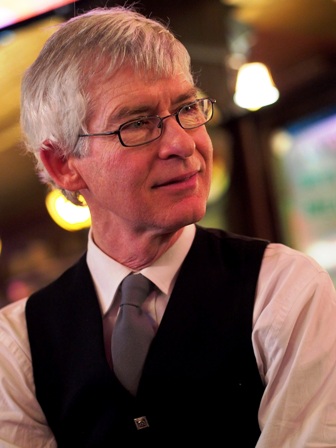 At age 62, Michael MacDonald jokes he’s almost too old to pipe any more.

“At this point, I’m usually the oldest piper in any bagpipe competition I play in,” says the Toronto resident. “I really am over the hill, but I believe I can crank out the odd jig or Piobaireachd that others can enjoy.”

Truth be told, MacDonald’s got a lot of life left in him yet. He’s just released his first CD that he describes as a music CD that happens to have a bagpipe on it.

“But I also wanted to make music that was true to the Celtic idiom. I tell people that this is not a bagpipe CD,” says the piper whose own blood is a mix of Irish and Scottish backgrounds. His earliest relatives arrived in Nova Scotia from Scotland in 1831. As well, MacDonald points out he lived in Scotland for a year in 1976, playing with the Muirhead and Son’s Pipe Band.

“I have been back to Scotland many times since because I love it there – especially the west coast and Glasgow.”

The story goes that MacDonald was asked to play a funeral for a friend’s brother who came from Cape Breton. Naturally, he was asked if he knew any Cape Breton tunes or songs.

“The bagpipe only has nine melody notes, so it has a limited capacity to play certain songs,” MacDonald explains. “I have always loved Rita MacNeil and her songs, so I listened to a couple of CDs trying to find something that would fit.”

As it turned out, he picked MacNeil’s Working Man and Home to play. At the funeral a number of Cape Bretoners approached him to tell him how much they enjoyed hearing the MacNeil songs and how they’d never heard them before on the bagpipes, and that planted the seed for the recording.

When MacDonald had the notion to record the CD titled Geoffrey Street Piper and Friends, he happened to be visiting with his 90-year-old father in Truro, Nova Scotia, when by chance his dad asked him if he needed any money.

“Normally, I would say no, but this time I asked him if he wanted to make an investment. I told him I wanted to make a CD and that any sales made would be returned to him. He immediately went into his bedroom and wrote me a cheque, thereby becoming the executive producer of the CD,” MacDonald recalls.

MacDonald has some help from his friends, musicians he’d previously played with in Toronto joints such as Hugh’s Room and the Gate 403. The musicians went into the studio cold, with no rehearsal.

“I knew all these people were really good and I was confident that we could pull it all together. The first day (after about five hours) turned out better than I ever imagined, but it was still quite rough.”

Help from the likes of Tony McManus and Pat Simmonds helped smooth everything out. MacDonald’s brother, who produced the recording, suggested having Michelle Rumball sing on the CD.

“Her smoky voice is perfect on the hymns and the Rita (MacNeil) songs,” MacDonald says.

So, is the CD as popular as MacDonald had hoped it would be?” He points out that he gave a copy to the Polish woman who cuts his hair.

“I cautioned her that it might drive customers away. She told my wife that she played it in her shop for two days in a row and found it relaxing. Others have remarked that they never knew that bagpipes could sound so good. So I think I’m off on the right track so far.”