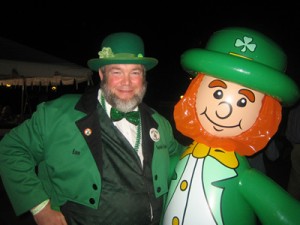 Though its population is only 75, 000 – many of whom are of Irish descent – Kalamazoo, Michigan is home to one of North America’s premier Celtic Festivals each year. Co-organizer Franklin Dohanyos fills us in on next weekend’s festivities!

What is your own ethnic heritage/background?
My father was Hungarian- the name Dohanyos means Tobacco farmer. Growing up in the 70’s I liked Rock and Roll, but I also I liked German polkas and Irish and Celtic music, and the pipes. I just didn’t know why. I started hosting an Oktoberfest at our Church nine years ago. Oddly enough, five years ago through DNA testing I found out the other part of my father’s heritage was German. But wait, it gets better. In my very early 20’s my mother started talking about our heritage on her side and I found out we are Scots/Irish. Which explains my love of these types of musical genres and lends truth to the old adage, “You’re always drawn to what you are!” I now have an Irish band and play the guitar and pipes.

How, when and why did you get involved with the festival?
I belonged to a Scottish group here in Michigan and quickly rose through the ranks to first vice president and PR person for the groups Highland Games. I learned a lot! Unfortunately, things became extremely political in this group and I am not a political person – life is just too short, So, I decided to start a new Scottish group called The Scottish American Society of Michigan. WE actually launched on Tartan Day, April 6th, in 2009. So far membership is growing nicely! A place called Canterbury Village had a very small weekend festival called Scottish Days and it was dying a slow and painful death. We had our new Society’s booth on Clan row and we knew we had to do something to turn it into a bigger event. I spoke to the person in charge and asked if I could have permission to put the event on steroids! <grin> So in 2011, our Society became the official hosts of the event, brought in a lot more entertainment, a Saturday night Ceilidh, free kids craft area, and a lot more. Being a PR person, I was able to secure a ton of free publicity for the event. Needless to say, attendance rose from about 400 per weekend to 2,300 per weekend. Same for 2012, We got involved because Canterbury Village was built like a small Scottish village with a castle-like structure in front. It is very conducive to this type of event. Now we rival other festivals.

What is the festival’s core mandate?
Preserve and further Scottish heritage here in Michigan, educate people about Scottish culture, and raise money to help other groups and individuals in need. We are a 501 c7 and raise money for causes throughout the year. Out Tartan Day Ceilidh in April each year raises money to send one college student to the Alma College Summer Fine Arts Camp. Also, to have doing it! No politics allowed! Lastly – to get the kids involved. If we don’t educate and entertain the kids now and teach them the love of our heritage, who is going to keep these type of events going? That’s what sets us apart.

How has it grown over the years?
This is year three for us being involved and now there is a big time promoter involved that is spending quite a bit of money to take what we have done and triple it or even better. It is still our festival, but we don’t have the expenses. We provide volunteers and our expertise, and in exchange we get a donation from which we take a certain amount and give it to a worthy charity.

Who attends the gathering?
Anyone and eveyone from zero to 100! We have people of all ages, races, creeds, colors, and everything in between. The good thing about our group is you do not have to be Scottish to join us! Just come have fun, whether you are from Scotland, have Scottish lineage, or just love the skirl of the pipes and the swish of the kilt.

Why is it an important event for the Celtic community there?
Michigan is rife with people of Scottish heritage. There are festivals all over the state, but not to close to ours, We fill a void in this area. It gives the people in the surrounding area a chance to see what we are all about without having to drive very far. God for kids, too!

Why is it an important event for the non-Celtic community there?
If we are going to grow as a nation and truly be a melting pot, as we are oft times called, they need to come see what our culture, heritage, and hitory is like – the pageantry, the pipes, the foods, the clans, the history, the Single Malts!

What are the plans for the festival in the years ahead?
Keep it growing as much as possible and hopefully add a ceilidh on the Friday night before the event. Within five years we want to be known as the biggest, best organized, and most fun Highland Games in the Mid-West, and have all events – pipes, dance, and athletes sanctioned.

Is enough being done to preserve and promote Celtic culture?
Here in Michigan I think so, but we need to educate the media more. St. Pat’s, Cinco de Mayo and other events seem to get a lot of coverage in the media while some Scottish Games don’t get as much. We need to change that, as well as staying true to what a Scottish Games really is all about!

What can we be doing better?
Education! Explaining to people what it takes to host a Games no matter how big or how small. More Scottish culture leadership training where all Scottish groups are invited to take part and learn, and share ideas. Get the Scottish groups all on the same page.