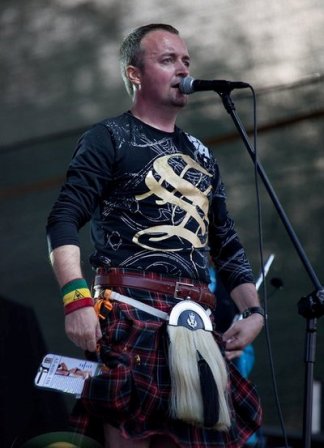 Celtic music veterans Mirrorfield have had a very busy year, and there is no sign of them letting up anytime soon. Frontman Jim Rowlands shares the details.

What is your own background/ethnic heritage?
I’m Welsh. The other singer in the band John Kenwright is half Welsh and half Irish. The bass and bag-pipe player Thomas Saint is Breton and the drummer Toff Del Monaco is Savoyard.

When and why did you start playing music together?
John and I met in 1990 at college and started playing together as a duo we called “Shot in Dallas” (our initials are JR and JFK). We started out playing Beatles and Dylan then round 1996 we decided to concentrate on Celtic music and especially an expression of our Welsh heritage and the fact that no one was playing Welsh music in France (where we have been based since 1993).

Are they the same reasons you do it today?
I would say definitely yes on the cultural level, although the types of concerts have changed and so have the public. Of the 1000+ gigs we’ve done, the first 500 were mostly pub/rugby club/small festival/Wales and France, but the second half has been Poland/Switzerland and more recently South Korea. The crowds are bigger, the pressure is greater as of course are the rewards, but I find that at that level the organizers and producers want a far more “festive” and dance music based sound which is fine we can do that, but it does detract slightly from the 100% culture aspect which I feel more comfortable with. I still do solo gigs on the side to cultivate the Welsh language side of things and also to maintain the intimacy of a sit down talk to the public kind of show.

How has the group evolved since that time?
We started in earnest under the name Mirrorfield in 1996 and recorded our first album as a four piece with John and I on acoustic guitars and a bass player and Italian fiddle player. They left quite early in the scheme of things and we recruited more “rock” musicians on the rhythm side (bass/drums/electric guitars) but also at that time early 2000s a great Celtic harp player called Hywel John and an American violin maestro Paul Susen (who still occasionally plays with us). We had a really great sound, great songs and a record label and were on the way up, but as often happens, the stress of touring and the pressures of that life-style took their toll and from 2003 to about 2006 we put the band on hold and went off into solo projects mine being “Y Cymry” a welsh language pop band with the harp as lead instrument, and John into his reggae band JFK. After having kids, divorces etc we got back together and with fiddle players Paul Susen and Mariette Deslecluse and new bass man Thomas plus our faithful old drummer Toff we have found a second lease of life, recording a new album Focus, and playing ever bigger stages, including a sell-out tour in Korea with a Seoul concert in front of 13 000 people.

How would you describe your sound today?
A recent concert review said “ils sont mi chemin entre la musique traditionnelle et le punk rock” (they are half way between traditional music and punk rock) and that might just be the best description 🙂

Why Celtic music?
My theory is that if Celtic people make music then whatever music they make must by definition be Celtic music whether it be classical, jazz or rap – a broad church for sure. We wanted to represent Wales and to promote Wales around the world. We loved the music we were hearing from Wales and Ireland and have tried to transpose it into a more rock context.

What makes a good song?
One that people like and that affects people. I have loads of songs I love, but am always surprised at the ones the public profess to like because they aren’t the ones i would have expected. So who knows? 🙂

Is your creative process more ‘inspirational’ or ‘perspirational’?
A bit of both; and also very enigmatic. About twice a year I suddenly write 20 or 30 songs in 3 days and then it stops and nothing comes. The sweating comes after, when we try to arrange them.

Where do you typically perform?
Really we’ve done it all. Stade de France, festivals of Celtic and other music, rugby clubs, pubs, restaurants, Montreux, fields in Poland, zeniths round France, even a circus tent!

What is the response like from audiences?
Touching wood we are blessed with having a 99.999999% positive reaction. they always dance and sing and clap along, whether it’s 50 people in a theatre or 10000 in a town centre. I wonder why with a CV like this we have never been given the chance to play to even more people.

Are we doing enough to preserve and promote Celtic culture?
We can always do more. I’m worried for the Celtic languages. I live in Breizh and well it’s really moribund here, although the culture around it is extremely vibrant, people just don’t use the language. this would be a direction I’d like to go in more in the future. Sing more in Breton and Welsh and maybe Irish, and less in English.

What can we be doing better?
Not only teach the languages to kids but also give them a reason to want to speak them later.

What does the band have on tap for the rest of 2013?
We’re recording a new album this autumn, and will be back on the road from January 2014 with a new show. Hopefully we will be visiting new countries too.