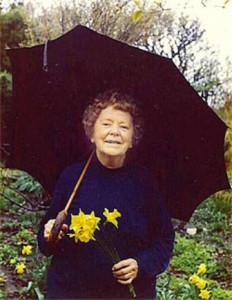 She is recognized as the main driving force behind the modern revival of Manx culture and is acknowledged as the most influential Manx poet of the 20th Century, but she is best known for her often controversial work to preserve and revive traditional Manx folk music and dance. She was involved in a great number of initiatives to revive interest and activity in Manx culture, including societies, classes, publications and youth groups. The most notable and successful of these was Yn Chruinnaght.

By May 1915 Douglas had moved back to her parents in Birkenhead. From here she studied at the Liverpool School of Art for two years whilst at the same time taking private lessons in violin, piano, singing and music theory from people associated with the Liverpool Philharmonic. With the start of World War I, she was called upon to work in her parents’ bakery in order to fill the role of a man who had gone to war.

Whilst in England, at the age of sixteen, Douglas had her first collection of poetry published; Manx Song and Maiden Song, published under a London imprint of Erskine Macdonald in 1915. This collection of 26 poems included ones written when she was as young as fourteen. Besides the numerous poems depicting the Manx landscape and sea, one notable poem was entitled ‘T. E. Brown: a memorial sonnet to the poet of Manxland.’ P. W. Caine reviewed the collection, commenting that: “This little book of lyrics is full of beauty and charm. The sound of the sea, the scent of gorse and the silence of the mountains pervade it.”

In 1916 Douglas took up Manx Gaelic lessons. She did become fluent in Manx, coming to teach and write poetry in it over the coming decade.

Douglas’ second poetry book, Mychurachan, was published in 1917. This collection of 40 poems derived its name from the Manx for driftwood or jetsam.

Her avid interest in the Celtic Movement in Ireland was deepened when Douglas visited Dublin in 1921. Whilst in Dublin, Douglas met George Russell, who influenced and encouraged her interest in Manannan, as well as seeing W. B. Yeats whilst visiting the Abbey Theatre.

Although Douglas is recognized as the “most influential” Manx poet of the 20th Century, interest in her writings has waned since her death. Today she is best remembered for her work to reinvigorate and reignite interest in Manx culture, particularly with regards to Manx music and dance, such as through Yn Chruinnaght. Douglas’ “extraordinary stamina” was all the more remarkable in that we was forced to work “tirelessly against the tide of public opinion which saw little value in what she was doing.” Douglas’ resilience can perhaps be attributed to her basic love of the Isle of Man, as she expressed in many ways during her life.