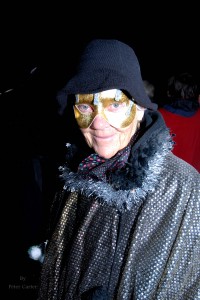 In Cornwall, residents are getting behind the revival of some ancient and very colourful traditions…

Led by a skeletal dancing horse and the eerie music of the Turkey Rhubarb Guise Band, the costumed revelers wend through the streets of old Penzance. In the glow of hand-held lanterns, their masks shine black and gold, while beneath a gleaming image of the sun the Lord of Misrule twirls his ribboned umbrella and laughs.

Montol Eve is a strange and special time in Penzance.  Held every winter solstice, usually on December 21st, Montol Eve sees processions of masked and disguised residents, known as guisers, parading and dancing through the narrow streets of this old port town. The evening is the highlight of the Montol Festival – a revived and re-interpreted celebration of Cornwall’s ancient midwinter and Christmas traditions.

“Cornish heritage is hugely important to communities and to individuals who are keen to be seen as having a very separate and distinct identity from their English neighbours,” said Musser, who also leads workshops in guise dancing. “We have our own language, traditional music and traditional dance, which have been revived and are still evolving.”

Throughout the evening, guisers dress in shabby black and tattered ribbons, known as mock posh, and carry large, bell-shaped lanterns that turn the processions into rivers of fire, designed to symbolize the death and rebirth of the sun. Leading the main parade, the Lord of Misrule wears a battered top hat and tail coat. As he dances and twirls his umbrella to the rhythmic Celtic tunes, he represents the spirit of fun and mischief.

The lantern-lit processions pass through the town and then assemble to watch the Lord of Misrule light the beacon at Lescudjack Hill Fort, one of the most ancient sites in Penzance parish.

Celebrations culminate in the ceremony of the chalking of the Cornish Yule Log or Mock, where the skeletal horse, known as Montol ‘Oss, chooses a reveler to mark the Mock with a stick man. The stick man’s origins are unclear but he’s believed to represent either the Christ Child or Old Father Time. The festival’s symbols are the spear andsquare of St. Thomas, whose feast day coincides with the winter solstice, and the Sun Resplendent, a traditional image popular with guise dancers.

“Right back to the Iron Age, horses have been symbols of the wild and unpredictable spirit of nature. You can see similar images in Wales (Mari Lywd ) and Ireland,” he said. “I have also seen pictures from Brittany showing the same kind of thing. The bird masks are from the descriptions from the 19th century celebrations – in times past there were far more animal images on display, including lions, horses, bulls – they all represent the power of nature.”

Reed, who is also author of the book, The Cornish Traditional Year, said that six years ago, when organizers began the revival work, they were immediately buoyed by public support.

“When I read about the traditions of guise dancing, I knew this would be a great way for people to celebrate together in a distinct Cornish way,” Reed told Celtic Life.

“We initially guessed that about 700 people would take part in the first event, but in the end we had over 3,000 participants. Every year, we see more and more people dressed in the guise dance costumes and masks, which is fantastic. When communities celebrate together in unique ways, based on their real history, then they become stronger and better places to live.”

The Montol Festival offers special events throughout December. During the days that precede Montol Eve, groups meet around the community to learn traditional skills such as guise dancing and lantern making. Also becoming popular, the revived Cornish Candle Dance (Dons Cantol) sees children dancing after nightfall around painted lighted candles placed in boxes of sand. Traditional guisers’ plays, such as St. George and the Turkish Knight, have also been revived, while Cornish Christmas carols are always favourites.

Reed said that in order to recreate the festival, revivalists researched the area’s traditions in the books of well-known Cornish antiquarians such as M.A. Courtney, William Bottrell and A.K.Hamilton-Jenkin. The texts revealed howCornwall’s winter celebrations revolved around guise dancers and musicians, who created masked mayhem and merriment.

In his book, Cornish Homes and Customs, historian Jenkin described the guise dance processions and performances of 1831 as “like an Italian carnival” and noted that “everyone including the rich and the great came masked and disguised on to the streets”.

“During the early part of the last century the costume of the guise dancers often consisted of such antique finery as would now raise envy in the heart of a collector,” Bottrell wrote. “The chief glory of the men lay in their cocked hats which were surmounted with plumes and decked with streamers and ribbons. The girls were no less magnificently attired with steeple crowned hats, stiff bodied gowns, bag skirts or trains and ruffles hanging from their elbows.”

Reed said that in times past, the Cornish people considered Christmas, or Nadelik, the principle feast of the year. “It is, in fact, thanks to a series of Cornish folklorists and historians, that many of the British traditions of Christmas were retained and not lost following the puritan zeal of the civil war years (1642-1651)” Reed wrote in his book.

The singing of Cornish Christmas carols or curls has an especially interesting history. Cornwall has a rich tradition of carols of all types, which includes a wide variety of unique melodies, arrangements, and songs known around the world, said Reed.

Many carols were collected in the West Cornwall area in the 19th and early 20th centuries, including such famous tunes as the First Nowell, which was often sung at the bottom of Cornish mines on Christmas Day when miners said they could hear the knockers, or mine spirits, singing along with them. Reed said that other Christmas songs with Cornish origins include, I Saw Three Ships, God Rest Ye Merry Gentlemen and While Shepherds Watched.

“Even now, carol singing in pubs on Christmas Eve is a popular activity in some places. Many of the Cornish male voice choirs hold sessions in pubs every year over the Christmas period,” he said.

“Montol has become a focus for many of the revived Nadelik customs and a welcome break from the never ending commercial Christmas of the 21st century.”

“When communities celebrate together in unique ways, based on their real history,” ays Reed, “then they become stronger and better places to live.”

Reprinted from the Winter 2012 edition of Celtic Life International Magazine