MORE WITH THE MAHONES 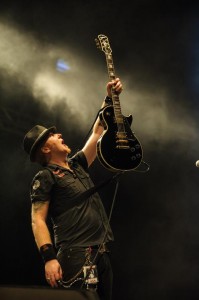 Canadian Celt-Rockers The Mahones are back on the road in 2013 in support of their latest release Angels & Devils. Recently, front-man Finny McConnell took time out of the band’s busy schedule to chat with Celtic Life International.

What is your own background/ethnic heritage?
I was born in Dublin, Ireland. My father is a Dublin native, and my mother, a Kearney, is from Galway.

When and why did you start playing music?
I discovered The Beatles as a child and that was it – I was hooked. I was also raised on The Dubliners and The Clancy Brothers, so Irish music was engrained in my mind from a young age.

How long has the band been around?
We started The Mahones for a one off show on St Patrick’s Day in 1990, and haven’t stopped since, so almost 24 years!

How has the group evolved since that time?
When we first started, we learned about 30 songs from The Dubliners songbook, and we sounded quite a lot like them and The Pogues on our first 2 albums. Our sound has changed a bit since then, and now, I would say we are one of the fasted and most Irish Punk bands on the planet. We have achieved the sound I have been looking for. The ultimate mix of and Irish and Punk fusion!

Why the decision to start performing Celtic music?
It’s in my blood, it’s my heritage, and I was raised with it. Also, because I was asked to play that St Patrick’s show and it went so well. I guess I realized then and there that this was what I should be doing with my life; mixing my passion for punk rock and my love of my Irish heritage and culture. It just went over so well that night, and here I am 23 years later, still touring all over the world.

How would you describe your sound today?
Today we sound like Maximum Irish Folk Punk Rock!!!!

How might you describe your live show?
It’s an extremely high energy show and we play new songs and all the old hits. Even if you don’t like Irish music, you will after you see The Mahones!

What is the response like from audiences?
Amazing! We have the best fans in the world. Our audiences are usually covered in sweat and smiles after one of our shows. They love to dance, mosh and stage-dive when things really get going!

What went into the new recording?
Lots of love. I went into the studio determined not to take any shortcuts. I worked closely with recording engineer and co-producer Rene De La Muerte, and we made sure the album sounded huge – our biggest yet!

What were the challenges of the process?
There weren’t many. We recorded and mixed the cd in less than one month. This cd was one of the easiest and fastest cd The Mahones have ever done.

Do you have a favourite track?
Shakespeare Road and Angels and Devils – I love playing them live every night on this tour!

What is your creative process like?
I guess I first come up with the album concept and the songs. One we head into the studio, I always start by recording my guitar and drums first. Then comes bass, accordion, tin whistle, mandolin, etc. I do all the vocals last to save my voice, and then finish with gang vocals at the end. The band doesn’t hear the songs until they come into record – that way, we get the spontaneous, high energy sound that we’re known for. This works best for us.

What make a good song?
Great songs have great hooks. A sing-along chorus and a good story in the lyrics make a great song. Go big!!!!

What does the band have on tap for the rest of 2013?
We are touring the world until Dec. Canada, USA, Europe, South America and Japan / Australia. Looks like a very busy year coming up. Can’t wait!

Is enough being done to preserve and promote Celtic culture?
Yes, I think so, and I certainly hope so. A lot of young kids are getting into the Irish Punk scene. It’s a new style of music and a fairly new genre. It’s promoting Celtic Culture all over the world. We pull into venues in Germany/Italy/Spain/etc…to find our fans waiting with Irish flags – it’s amazing! Like anything else, the Irish music scene had to evolve, and it’s taken on a whole new life in the past 4 decades. It’s very exciting.

What can we be doing better?
Just keep being proud Irish men and women, and let’s continue to spread our culture through our music. I’m proud to be born in Dublin, I’m happily married to an Irish woman, and I’ll continue to spread my love of all things Irish. Like Jamesons Irish Whiskey, we all only get better with age.