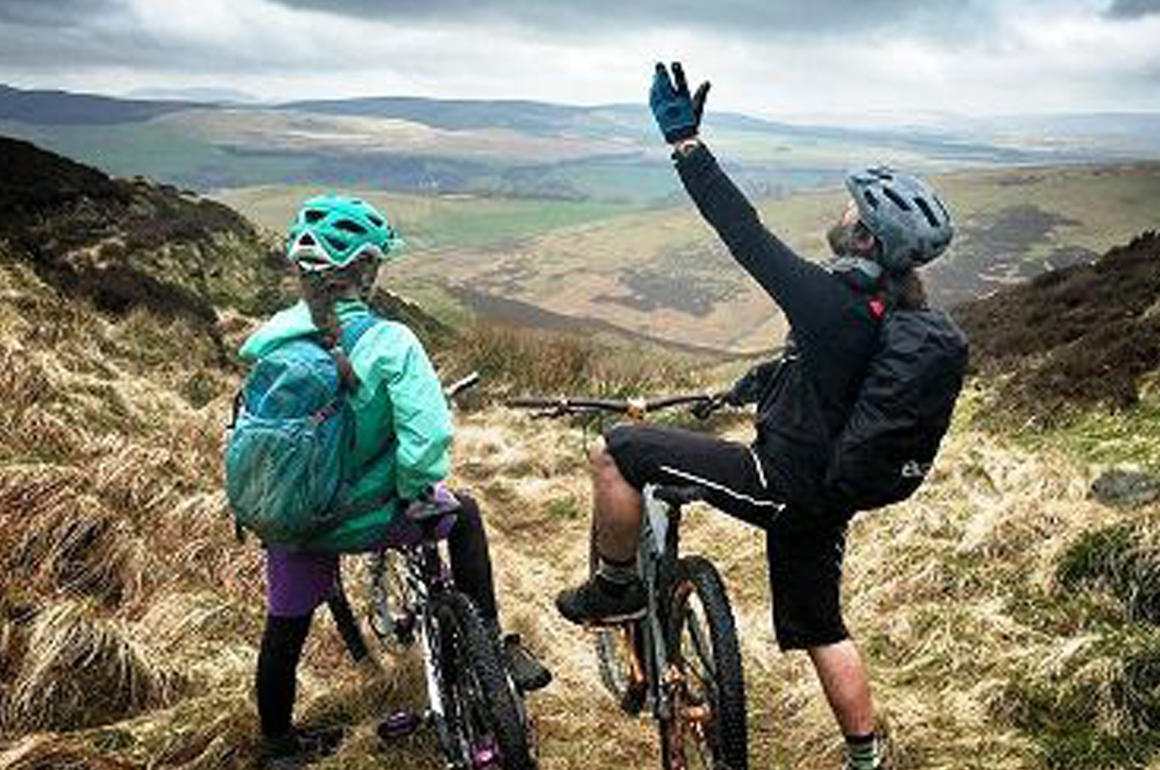 “Starting off from the very tip of Loch Lomond, the route passes through gorges and rapids with dark peaty pools,” the seasoned mountain biker describes.

The course then proceeds by Robert the Bruce’s St. Fillan’s Chapel, crosses the Bridge of Orchy, where bikers can revel in 1,000-foot views, descends down to Rannoch Moor and ends at the 17th century Kings House Hotel.

“This day’s ride has everything you could ever want from mountain biking in Scotland, with great climbs, amazing descents, fabulous scenery and the chance to chat to amazing people from all over the world,” shares Shields.

Scotland’s mountain biking scene has exploded over the last 10 years, and recreationalists, competitors, guides and trail centres are all along for the ride.

“The Scots have gone positively bonkers!” declared the International Mountain Bicycling Association (IMBA) upon awarding the nation the coveted Global Superstar title in 2005 and 2006. Increased trails and facilities and never-ending natural, cultural and historical experiences have transformed Scotland into one of the world’s top mountain biking destinations.

“It has evolved into a mainstream activity for many holiday makers,” says Sam Hill, owner of The Break Pad, a bike hire shop in Newton Stewart. “It used to be very much men in their 30s, and now we see all sorts of people.”

Numerous centres have recently popped up across the country on Scotland’s Forestry Commission lands, including Laggan Wolftrax in the Highlands and 7Stanes in the south. The latter offers eight centres with 400 km of single-track trails and routes marked according to skill level. “They are colour-graded from the green route for families with small children to the black route for serious mountain bikers,” explains Hill.

“The 7stanes trails should be on everyone’s list,” raves Peter Corson, owner of Trailbrakes Biking Holidays. “They include some of the most flowing, fun single-tracks available anywhere on the planet.”

Scotland’s more rugged terrain is also open for exploration. “Scotland has liberal views on access to the countryside, with equal access rights available to bikers on pretty much any trail where you can walk or ride a horse,” says Corson.

He’s referring to the Scottish Outdoor Access Code (2005) which allows bikers free rein in many of Scotland’s far-flung landscapes as long as they ride responsibly.

“There are large areas of sparsely populated back country with mile upon mile of great scenery and fantastic trails, from easy going gravel roads with magnificent views, to action packed single-track that will have you hurtling down a mountainside,” Corson notes with a grin.

Mari Findlay, Development Manager of the 7stanes Mountain Biking Community Interest Company, says that local and international bikers have responded to Scotland’s purpose-built facilities and open access laws. “In 2007, the number of tourists who undertook mountain biking during a trip to Scotland nearly doubled from the previous year.”

Findlay adds, “Mountain biking tourism generates ₤46.5 million (US$74.4 million) each year for the Scottish economy plus there are an estimated 11.8 million people who own a mountain bike in the UK.”

What perhaps makes Scotland most appealing for both rookie and professional bikers is the holistic experience. Many destinations have biker-friendly accommodations, cafés and rental shops and even the option of hiring companies to transport your baggage. Opportunities for cultural and historical immersion also abound.

“Any cross-country biking route can be adapted to include detours to visit places, from ancient churches and castles to distilleries and ice-cream factories,” shares Corson.

John Fulton, pioneer of the renowned Coast-to-Coast mountain biking route, understands the importance of integrating recreation with history. “One can ride on ancient trails used by the Highlanders over the centuries,” he muses. In July 2014, Fulton’s company, Wildcat Adventures, is planning a tour to commemorate the 700th anniversary of the Battle of Bannockburn, which will coincide with the International Gathering of the Clans.

Recreational mountain biking will also continue to grow, Shearer adds. “Businesses are becoming more aware of the benefits of mountain biking tourism to Scotland’s economy, so there’s a real commitment to growing the sport for the future.”

With more trails and centres being developed and upgraded, Scotland shows no sign of slowing down and nor does the influx of local and international mountain bikers.

So, where to begin your Scottish MTB adventure?

“Of course I’m going to recommend Kirroughtree where we are based,” says Hill, “but you can really take a mountain bike safari here in Scotland for a month. Head up to Fort William to sample the World Cup downhill course and the amazingly technical trails of Laggan Wolftrax; take a trek up to the Isle of Skye and encounter a golden eagle…The opportunities to have a real Scottish experience are endless.”

Perhaps you might book H&I Adventures’ leisurely Taste and Trails of Scotland tour or more challenging Torridon and Skye. You could complete the classic Coast-to-Coast with the trail’s pioneer, Wildcat Adventures, or an alternative Southern Upland Coast-to-Coast tour with Trailbrakes Biking Holidays.

But you don’t necessarily need a plan. Set out in the Highlands north, the Lowlands south, the Isle of Skye or any place in between and allow your body, spirit and wheels to freely roam.