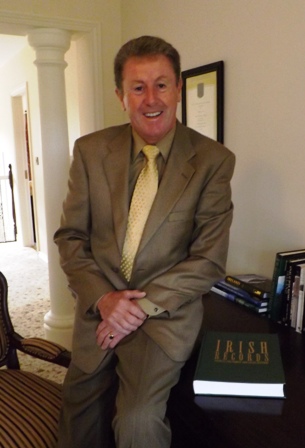 Whether you are looking to visit Ireland to trace your roots or explore some the Emerald Isle’s history and scenery, Sean Quinn of My Ireland Heritage will make sure you find what you are looking for.

What is your own heritage?
I am Irish the name O Cuinn goes back to the 4th Century High king of Tara Art Mac Cuinn (Art son of Cuinn)

How and why did you get involved with genealogy?
I got involved in genealogy to trace my own ancestors. Records in Ireland are not always great and unfortunately the early 1800s were the best I could do.

What inspired you to start your own business?
My love of genealogy, and meeting people to show them the real Ireland – many places of which most people never see.

Are these all the same reasons that you keep doing what you do?
Yes and to pass on the legacy to future generations.

What are the challenges of your profession?
The records in Ireland were burned in the 1922 Civil War, and so we have to go through many different avenues to come up with answers for our Clients.

What are the rewards?
Knowing that we have found someone’s loved ones, and then creating a “dream tour” built around the heritage of Ireland – from Neolithic Times trough the Normans and up to that Famine period.

Who is your typical client?
Someone who has a love of Ireland is searching for a connection to the mystical island of Ireland. Usually someone whose family who left the country at the height of the Famine 1845-50 when 1 million died and 1 million emigrated.

What makes your business unique in the marketplace?
Most companies do either genealogy or touring – what makes us unique is that we combine both services. A tour of Ireland based around family heritage.

From your perspective, is enough being done to promote and preserve Celtic culture generally?
In Ireland there has been a renewed interest in all that is Celtic, especially dance, language and song. This has been brought about because so many other nationalities with their culture have come to our shores in the last ten years.

What can we be doing better?
A lot more can be done. A proper investigation of La Tene Culture and introduction to countries would be Magnificent. The La Tene culture first came to Ireland in 400 BC.

What’s next on the company’s agenda?
To greatly expand our business – in particular to North America. It;s an exciting time in Ireland, especially with the celebrations of 100 years of The Easter Rising in 2016 which ultimately led to our independence in 1921.