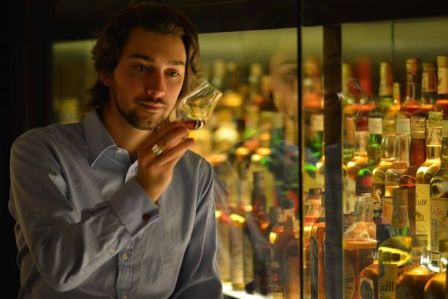 Blair Bowman is the founder of World Whisky Day. In this exclusive article for Celtic Life International. he shares his whisky journey.

As a freshman at university in Scotland I co-founded a whisky society, and my whisky journey began there.

Whisky obsessed me and I wanted to learn as much as possible. Our society made trips to distilleries a couple of times each semester. I attended whisky industry events, such as festivals and tastings. Since I enjoyed networking, I quickly amassed a cardboard box full of business cards of whisky industry connections.

By the time I graduated university, the whisky society attracted dozens of distilleries eager to come and give tastings. They were enthusiastic about talking to a crowd of young whisky fanatics. Distilleries would ask what the last distillery had brought. If it was a 15-year-old-whisky, then the next one would bring a 20-year-old whisky.

During my first year at Aberdeen University, I spent a month in Shanghai studying Chinese. I attended a Scottish government reception and met a few members of the Shanghai Malt Whisky Society while there. Returning to Shanghai for four months in 2010, I became a regular at their events.

In my second year of university I continued to network and build up industry contacts for the whisky society in order to attract more distilleries into visiting us. At the same time I began judging at various whisky competitions from Speyside to Chicago.

While working in Shanghai, I got to know the organiser of Taipei WhiskyLIVE and was invited to help out at the show that year. One day on Twitter  #WorldGinDay became a global trending topic. Curious, I wanted to know more, but Google turned up nothing. While searching, I happened to discover the domain name www.worldwhiskyday.com was available, so I immediately purchased it and then set up a Twitter and Facebook page. Within days, thousands of people said they would attend a World Whisky Day celebration.

From then on, the day turned into something bigger than I could have imagined. The first World Whisky Day in 2012 made the front page of the BBC News website and the hashtag for the event became a trending topic on Twitter. More than 20,000 people attended over 200 events in over 40 countries. Every continent except Antarctica held events.

The day is a celebration for everyone and all types of whisky – whether it’s Scotch whisky, Irish Whiskey or bourbon or any other kind of whiskey/whisky.  It’s an opportunity for everyone to celebrate the wonderful tipple.

The day provides an opportunity to try the beverage and an inroad to find out more about the drink.