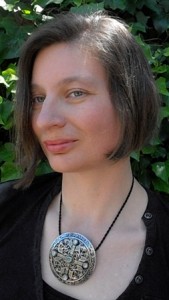 Nagle Forge & Foundry is an American casting company that specializes in designing and crafting historically inspired and limited edition jewelry and clothing fasteners. Recently we spoke with Sarah Nagle about her family’s business.

What is your own background/ethnic heritage?
Well, Nagle is actually an Irish name. Nagles have been immigrating to North America since the 1700s. The Nagle story of emigration is a very typical Irish-Diaspora story. Big families and small farms back home meant that for almost two hundred years every generation another batch of siblings would have to emigrate. My great-grandfather was born in the 1880s and had about ten brothers and sisters and almost all of them ended up in either the U.S. or Australia. Our people all came through New York and pretty much all stayed in New York for about eighty years. New York City has had a huge Irish-emigrant community since the 1850s and even today some of the traditionally Irish neighborhoods haven’t changed much since the 1950s. But New York has also been the melting pot of America for centuries. A hundred years ago the city was really a cauldron of different ethnic groups. And as a family we reflect that today. Since the 1920s almost every marriage in our family has been an ethnically mixed marriage and as a result we all have a very diverse heritage. My father, for instance, has a quintessentially Irish name, Brian Nagle, but he is also part Scottish and he belongs to the Clan Gunn Association of North America. We like to think of him as a bi-Celt. One of our model-carvers, Michelle Jones, is half Irish and half Italian. We have cousins who are half Philippine and half Irish. For younger members of the family it is even more complicated. My great-grandparents and great-great grandparents came from at least seven different parts of Europe, and a hundred and thirty years ago my ancestors lived in at least three of the traditional Celtic lands.

What inspired you to start the business?
This is a family run business. We’ve been in business a long time and have every intention of remaining in business for a long time.

What are the challenges?
Every business has challenges. But I think that one of the main challenges for any artist, designer or craftsperson these days is dealing with the fact that we have almost no way to protect our intellectual property. Especially in the jewelry industry, knock-offs are endemic. For us coming out with new designs every year is a point of pride. We try to introduce at least twenty new pieces a year. We put a lot of time, effort and skill into our designs and sometimes it’s just heartbreaking to realize that at least once a year someone will have a factory that specializes in fakes copy one of our designs. I don’t think it really hurts our bottom line much because the copies never have the detail or quality that our own work has. But we invest a lot –emotionally and economically– in all of our designs and we really work hard to develop unique styles. It is difficult to be put in a position where we have to explain the difference between an original and a copy, between a real emerald and an emerald-toned stone.

What are the rewards?
Making something that will last. Making something that will have an enduring value and really become a family heirloom. Everything we make has our makers mark on it –either the Nagle Forge & Foundry oval logo or the split NF&F– and often some of our larger or more involved pieces have the individual name of the individual primarily responsible for the master. My father did a limited production –only three hundred were made of each– line of greenmen and greenwomen brooches for a decade and he signed each piece with his full name and marked all the artists’ proofs. Any kind of craft is in part a conversation between the maker and the viewer. We make our pieces to last and it is incredibly rewarding to know that things we make today will still be part of someone’s life in a hundred years.

What is the company’s core mandate?
Integrity. Integrity of materials. Integrity of purpose. Integrity of design. Everything we make is marked with our company name –which also happens to be our family name– and we really believe that our word is our guarantee. Our pewter does not have lead in it. Our silver is always sterling. The gold items we make are almost always 14k. And everything we make is designed for a purpose. Our plaid brooches are decorative, but they are also fully functional. Our wedding bands are very sculptural but they are also heavy enough that they can be worn for half a century, or longer. We believe in quality and craftsmanship and that is why we make everything ourselves in California.

What are your key products?
Weave always made a lot of historically inspired pieces. We’re a very traditional casting company so although we use a lot of modern equipment we still make all of our models by hand. My father has also always been very interested in sculpture –he has never done gallery shows but there is a waiting list of people who have asked to be notified whenever he completes a new sculpture– so we have the equipment and skills necessary to cast items that are at least four or five times larger than the largest piece most modern jewelers make. About twenty years ago we started getting a lot of requests High-Victorian and classic 19th century style Plaid Brooches. Eventually we developed our own line. We make a magnificent highly sculpted Stages head brooch that actually has four smaller stags hidden in a thistle wreath. We actually make over 140 different Plaid Brooches designs now. We make a lot of classic pieces, Luckenbooths, Dragons, Lions, Thistles, Harps, etc. But we also make Celtic knots that are more sculptural than anything anyone else makes, and we make a Star of David/Magen David Plaid Brooch that features a Celtic inspired wreath pattern and is inlaid with blue millefiori. We also make a lot of pieces that are inspired by pre-Christian mainland European art. Were always designing new pieces so our archive is very large.

What is your marketplace?
We’re a small family operated firm so we don’t have time to be on the road a lot but we make an effort to personally attend and vend at least four and sometimes six Scottish Games a year in the U.S. As we are a California company we are always at the Woodland Scottish Games in April –it’s been put on by the Caledonian Club of Sacramento for almost a hundred and forty years. We also vend at the Monterey Scottish Games on the central California coast. In September –Labor Day weekend in the U.S. is always the first weekend in September– were at the Caledonian Club of San Francisco’s games which are held in Pleasanton, California. The club has been putting on Games since 1866 and it is one of the biggest in the world. In October were at the Seaside Games in Ventura –its held right on the beach in Southern California so it has a really unique atmosphere. Because we also make a lot of historically inspired pieces weave also had booths at a number of Renaissance Faires throughout the United States over the years. For the past few years we’ve been focusing on expanding our wholesale business and there are now stores in New York, Pennsylvania, Virginia, Michigan, Texas, Arizona and Canada that carry our line. We’ve also been online since 2005. But our website only features a fraction of our pieces.

How do you differ from your competition?
We started out as a casting firm, but we cast both low and high temperature metals. A metal like pewter is considered a low temperature metal, while bronze, sterling silver and gold are all high temperature metals. Most casting companies focus on either high temperature or low temperature metals. But we really feel that every metal has specific properties that make it appealing for certain projects. So when we design a piece we generally design it to be made in either pewter, or silver, or bronze. We rarely offer the same design in more than one metal. We also make everything ourselves and we do all of our own design work –unless were doing a custom job– so we have a deep understanding of the craft rather than just the design. We started out as metal people –and stone people too, my mother has a degree in geology– so we know a lot more about the physical materials than someone who comes from a fine arts background. This enables us to push the envelope with some of our designs, it also means we can guarantee our work. If someone breaks or damages one of our Plaid Brooches (or sash pins, or pendants…) we really will fix it or replace it.

Are we doing enough to preserve & promote Celtic culture generally?
Yes and no. Celtic culture –and Irish culture in particular– is  really vibrantly alive in our part of California. San Francisco has one of the biggest St. Patrick’s Day parades in the United States. San Francisco also has one of the oldest Caledonian clubs west of the Mississippi so there are a lot of Scottish events in the area too. And, there are also a lot of local places that have regular Celtic music nights and they bring in out of town bands and also provide a venue for local musicians which is just great. But a lot of the biggest Celtic events in California are all managed and put on by volunteers –which is absolutely wonderful, volunteers bring so much passion and personality to an event– and sometimes it’s a worry that it is always the same dozen people doing everything. Expecting a few dozen people to shoulder the burden for everyone sometimes seems a little unfair.

What can we be doing better?
I think education is important. I think a lot of people are interested in Celtic culture, but I think people would just fall in love with it if they had a better understanding of how diverse Celtic culture really is.

What’s next on the company agenda?
Were always designing new pieces –for the next few months well be working on a nature themed series inspired by the plants and animals of Ireland, Scotland and Wales. But for 2013 we also plan on expanding our wholesale business in both the U.S. and Canada.