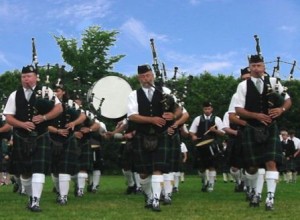 As a drummer with the Fredericton Society of St. Andrew Pipe Band, Justin Gallant knows the rhythm of New Brunswick’s Celtic community. Here, he opens up about the annual Highland Games, which wraps up today in the province’s capital city.

When and why did you get involved with this event?
I first attended the Games to watch my father perform with the folk group Oran when I was one year old. I began volunteering at the age of six and became a competitor a few years after that. I’ve always enjoyed the music and East coast atmosphere of the Games.

What are the rewards of being involved?
Being around the Games for so long I’ve had the opportunity to watch the festival grow into a very successful organization. It’s always a pleasure to see new people coming out to take in all that the Games has to over and to watch young musician mature as players.

Why is it an important event for the community there?
The New Brunswick Highland Games is one of the top three festivals in the region alongside Country Fest and Harvest Jazz and Blues. The spectators and competitors that visit the city during the Games bring extra business to the downtown area and the Games offers a broader look into Scottish culture in the city.

Are we doing enough to preserve and promote Celtic culture generally?
I think that Celtic culture is not something that the general public has a lot of information on. There are a few key groups of people in the Fredericton area that work very hard throughout the year to bring Celtic culture into the spotlight and to educate people who are interested in learning more.

What can we be doing better?
One of the major problems facing the groups responsible for promoting Celtic culture is funding. Any program or event that is well funded is more likely to be well advertised and successful. Despite that setback I see new people interested in coming out to Celtic events every year and I have a great level of respect for all of the individuals responsible for making this happen.