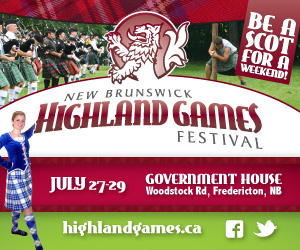 Fredericton, New Brunswick is the place to be this weekend, as the 31st Annual New Brunswick Highland Games brings thousands of Celts together for three days of family, friends, food, fun and festivities. Recently, we spoke with Festival Chairperson Chris Gallant.

What is your own ethnic heritage/background?
With the last name Gallant it isn’t difficult to realize I am not Scottish, not on my father’s side. I am 50% French and 50% Irish.

How, when and why did you get involved with the New Brunswick Highland Games Festival?
I originally got involved with the Highland Games Festival when I was a kid. I used to volunteer while my parents, who were part of the singing group ORAN were performing at the Festival.  From there I joined the Fredericton Society of Saint Andrew Pipe Band and was involved as a performer/competitor, and when I completed my Business Degree in Marketing I was asked to take on the Marketing role. I Co-Coordinated Marketing for 5 years prior to taking over as Games Chair this year.

What is the festival’s core mandate?
The New Brunswick Highland Games Festival is a volunteer, not-for-profit, charitable organization. Our mandate is to celebrate Scottish culture and provide an opportunity for education and growth of this diverse culture.

How has it grown over the years?
The Highland Games Festival has been held annually since 1981. The Games were first held at the track in Oromocto until 1991, then we moved for a brief time to the Fredericton Exhibition Grounds before settling into our current home on the beautiful grounds of Government House. The size and scope of the Highland Games Festival has grown dramatically over the last 5 to 10 years. In the beginning the Festival focused more on the competition side of things, as we have grown we have included a learning aspect with our workshops, and a fully fledged entertainment line-up with acts from all over eastern Canada and this year we have a group playing our Saturday night ceilidh from Ireland. The last few years the NB Highland Games Festival has had the largest number of pipe bands and competitors competing on the Highland Games circuit in Atlantic Canada.

Who attends the gathering?
Our patrons have diverse backgrounds. It ranges from those with Scottish or Celtic heritage, to those interested in learning about that culture. In the past, the Highland Games Festival struggled to get out the word out that you don’t have to be involved with Piping, Drumming, Highland Dancing, etc to enjoy the Festival. It can be fun for everyone. So a few years ago, we started using our tag line ‘Be a Scot for a Weekend’.  Much like everyone is Irish on St. Paddy’s Day, anyone can be a Scot for the weekend of the NB Highland Games Festival.

What can they expect to experience this year?
This year, as usual, the Festival is offering the best of the best. We have our usual slate of workshops that run over the weekend, the Piping, Drumming, Highland Dance, Heavy Events and Pipe Band contests. Entertainment in the Ceilidh tent with several wonderful acts, 3 of which are ECMA nominees, and of course the Celtic Rock group Rubicon will be here, all the way from Ireland, to perform in our Saturday evening ceilidh. We have also added a 5K Kilted Run on the Friday evening prior to the opening ceremonies and open air concert.

Why is it an important event for the Celtic community there?
There is a population of approximately 140,000 New Brunswickers who claim Scottish ancestry. The NB Highland Games Festival in Fredericton is the largest celebration of this in the province.

Why is it an important event for the non-Celtic community there?
For the most part, those of Celtic heritage know their background and how it came to be.  Having a festival such as ours allows us to showcase that for the Non-Celtic community. Our workshop background and clan avenue are great areas of the festival where people can learn about the Scottish/Celtic music, folklore and culture.  As I had said previously, this is one area where our festival can grow. The NB Highland Games Festival is open to everyone to come and enjoy the all great things that are Celtic. Anyone can ‘Be a Scot’ for the weekend.

What are the plans for the festival in the years ahead?
To continue offering quality programming. We strive to bring something fresh and new in every year, such as the Kilted 5K this year. We’re an award winning festival, and we want to continue that trend. Our exit surveys show that the majority of our patrons come from Fredericton and Surrounding communities, but we’re a provincial Festival and would like to see it grow into a destination festival. Attract more people from other parts of the province.

Is enough being done to preserve and promote Celtic culture?
There is a movement afoot to ensure that the legacy of the Scottish families in New Brunswick is not forgotten.  I would recommend that anyone who wants to see their legacy preserved to check out the New Brunswick Scottish Web Portal Project. It is a great initiative that future generations can used in schools in New Brunswick and around the world.  It will show the impact the Scottish Community had on New Brunswick in the areas of government, education, law and commerce

What can we be doing better?
I’m not sure if there is really anything we can be doing better, other than working together. There are a lot of groups out there working to ensure Scottish/Celtic culture is promoted and preserved, however I think there are a lot of areas that these groups can work together. There seems to be a large divide between some of these active groups, and they do their own thing. These groups could work together for the overall goal and greater outcomes can come to fruition.