The name Nova Scotia is Latin for ‘New Scotland,’ and was first given to this part of North America in 1621. Although there were occasional Scots among the early settlers, they did not come in large numbers or establish permanent communities until 1773, when emigrants from the north-western coast of Scotland arrived in Pictou.

The Pictou Scots were Presbyterian and spoke Scottish Gaelic. Many of their descendants later moved to other parts of Canada and the United States, but Pictou continues each summer to celebrate the arrival of the ship Hector with its founding immigrants.

In 1775 Michael MacDonald came to the western shore of Cape Breton Island from Prince Edward Island. A poet and sea captain, he and his relatives had left Scotland a few years earlier. MacDonald encouraged his family and friends to join him in the area now known as Inverness County. They welcomed the opportunity to acquire their own land and to begin farming and fishing. Thus began Scottish settlement on Cape Breton Island. 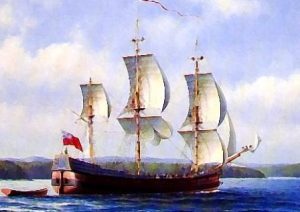 A number of Scottish families, mostly Roman Catholic, arrived in Nova Scotia in the late 1700s from the Western Isles (the Hebrides). Many took up land near Antigonish, others along the Bay of Fundy near Parrsboro, and some later moved to Cape Breton Island. Around 1800, a number of other families emigrated from Barra in the Hebrides, settling along the Bras d’Or Lakes where they established communities with strong connections based on kinship and language.

A growing number of emigrants from Western Scotland and the Hebrides arrived after 1800, settling through mainland Nova Scotia and Cape Breton. Whether Presbyterian or Roman Catholic, they all tended to live in communities made up of people from their former homes. While the majority spoke Gaelic, some spoke English as well and a few communicated in Lowland Scots dialect.

The early Scottish settlers were attracted here by the prospect of owning their own property, free from the demands of landlords, and by the potential to provide better opportunities for their children. Scotland, like Ireland, was over-populated and unable to support them. Emigration was a necessity, even though they lamented leaving homes and relatives behind.

After 1820, thousands of Scottish families were forced to emigrate during ‘The Clearances’ – a time when landlords, eager to consolidate small properties into large, profitable sheep farms, evicted their tenants to do so. Those who came to Nova Scotia found land in the rear of earlier settlements in Cape Breton and the eastern part of the colony.

After 1840, Scottish emigration to Nova Scotia virtually ceased and did not resume until the late 1800s, when many Lowland Scots coalminers came to work in newly-established mining towns such as New Glasgow, Inverness, and Sydney Mines. They spoke English and Lowland Scots dialect, and were quickly absorbed into the prevailing culture.

Over the years, Cape Breton communities such as Christmas Island, Whycocomagh, Mabou, Grand Narrows and West Bay, where the residents were primarily Gaelic-speaking, retained their enthusiasm for Gaelic song and story, as well as for piping and fiddle music. Story-telling and the recitation of historical lore and genealogical connections were part of every family gathering. Many of the orally transmitted accounts of these families are preserved today in manuscripts, published material and sound recordings kept by local archives.

Outmigration of Scots from Nova Scotia began almost as soon as major immigration ceased. Frustrated by poor crops and a weak economy, boatloads set sail in the 1850s for Australia and New Zealand, seeking better living conditions. Others moved to Ontario and New England, particularly to the Boston area where thousands of their descendants live today. Many also found their way to the mining towns of the western United States. 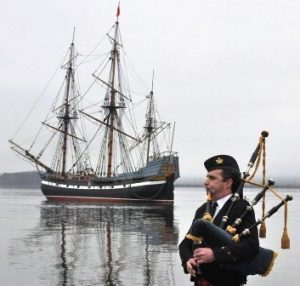 The opening up of the Canadian prairies in the early 1900s provided additional opportunities for the grandchildren and great-grandchildren of the first settlers. The descendants of Nova Scotia’s early Scots are now scattered far and wide — including the more recent generations, who continue to leave for employment in Toronto, Alberta, and beyond.

There are still, however, plenty of Rosses and MacDonalds, MacNeils and Grahams, Campbells and Camerons, etc. in Nova Scotia – with the strongest concentration being in the eastern mainland and on Cape Breton Island. Strong cultural survivals are evident in place-names like Glencoe, New Glasgow and Barra Glen. Societies dedicated to interpreting Scottish heritage exist in many communities. Festivals and events celebrating this legacy are also well publicized.

Each summer, and especially during the Celtic Colours festival in October, there are countless opportunities to enjoy traditional dancing, singing, piping and story-telling, as well as to meet local people and hear Gaelic spoken and sung. Scots in Nova Scotia have always treasured the hospitality of their ancestors, and today they extend Ceud Mile Failte (‘One Hundred Thousand Welcomes’) to all visitors, particularly those who may be distant kin.