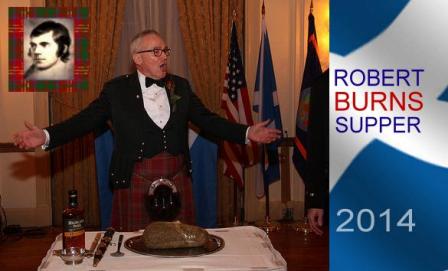 John B. MacDonald, the 80th Chief of the New York Caledonian Club, has attended every Robert Burns Supper at the club since 1988. Asked if he recalled any particularly memorable evenings out of those nights, MacDonald joked: “I have lots of memories. Some of them are better left untold.” The fact is, if you’re planning to celebrate the man Scottish television viewers in 2009 voted as “the greatest Scot” and the famed bard who authored, among many, many other poems and songs, Auld Lang Syne, then you could do far worse than gather at the New York Caledonian Club.

Established in 1856, the not-for-profit society whose goal, among others, is to “maintain connections with Scotland and with various Scottish diaspora communities around the world,” the club has hosted Burns Suppers since the 1850s. All joking aside, MacDonald remembers a few stand-out evenings. A number of years ago, a playwright showed up with members of his cast and the performed an act from his dramatization of The Immortal Memory. Unfortunately, MacDonald says, he doesn’t believe the play ever made it into production. “I don’t think anyone had ever seen anything quite like that at a Burns Supper.”

MacDonald also recollects a band in the early 1990s that used to play at the club’s Burns’ Suppers. “They were a young Scottish-Celtic rock fusion band that spent half the year in New York and the rest in Florida,” MacDonald reminisces. “Clan Na Gael is now known as Seven Nations and is one of the premier American-based bands, touring all over the world. A lot of their music was first tried out at our Burns Suppers.”

Burns Suppers began in the 18th century and friends of the poet initially hosted them in the area around Ayrshire, according to MacDonald. Early suppers coincided with the anniversary of the Bard’s death on July 21. In following years, various cities in Scotland formed Burns clubs and moved the date of the celebration to fall on his birthday, January 25th.

MacDonald notes that in every country where Scots descendants may be found, Burns Suppers are held. Among the world’s places which hold them are the United States, Canada, Australia, New Zealand, India and in Africa. Even Mexico, Russia and Japan celebrate the poet with an evening. “I think if Burns Suppers were purely an evening of entertainment, they would not have been able to spread around the world and to have endured for 200 years,” MacDonald says. “Partly it is a celebration of a (mostly) shared Scottish heritage. It is also a celebration of the life and work of one of the greatest poets of all times.”

The Caledonian Club’s Burns Supper is representative of the evening. After a reception, the some 120 guests are seated in the dining room, where the formal section of the evening’s program begins. Accompanied by a piper, the haggis is brought in and then someone recites Burns’ Address to the Haggis. Following dinner, the principal speech, The Immortal Memory is made. “The subject for this speech is at the discretion of the speaker, but it will always reflect somehow on Burns and his works, usually including recitations of various parts of his writings,” MacDonald says.

While the evening’s menu has not yet been finalized, this year’s dinner will be similar to last years. Options include appetizers such as New Zealand lamb chop with rosemary garlic sauce, sea scallops wrapped in smoked bacon or curried chicken chutney on endive. Entrees consisted of either sautéed breast of chicken piccata with lemon and capers or rice and seasonal vegetable bundle. And of course, the supper included traditional Scottish Haggis. During the reception Mary Abidll and Jenny Evans will play piano and fiddle and following the meal they’ll provide music of Ceilidh dancing with Abdill acting as the caller.

The grand evening is hardly done when plans begin for next year’s, MacDonald says. A committee and chair are immediately formed and once a date and a place have been set, the goal is to find interesting and entertaining speakers. “The Caledonian Club is a social and cultural organization, rather than a literary one, so keeping a talk informative and lively is a very important task.”

MacDonald jokes his favourite part of the evening is when he call tell people, “Thank you for coming. See you next year.” He says that means they’ve made it through another successful evening. But in actuality, the part enjoys the most is the Address to the Haggis, which he calls a fun piece, especially when someone who knows how to deliver it gives the address. “And, as one of the organizers, I can usually get the presenter to pour me a wee dram while he’s paying the piper.”