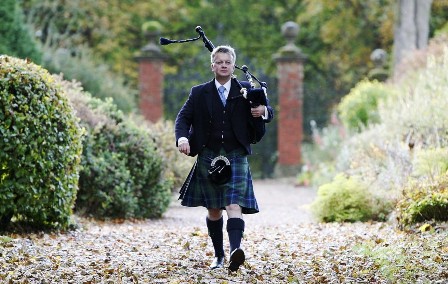 Something magical can happen when a large group of musicians get together to play. Magnus Orr has not only witnessed this numerous times, he’s been instrumental in producing some of the most memorable massed pipe band events around the world, including, most recently, the New York Tattoo.

Growing up in Golspie in the Northern Highlands of Scotland, Orr began playing the pipes when he was a Primary 5 student. Apparently, his lessons went well.

“Magnus Orr is one of the top pipers in the world today,” writes broadcaster, author and actor, Daniel B. Region. “When Magnus plays you realize that if Eric Clapton played the bagpipes, then that’s pretty much what he’d sound like. Magnus is that good. And, he is a friendly, outgoing man who loves a good laugh.”

Now based in Edinburgh with his wife and their three children, Orr has a knack for bringing hundreds or thousands together to do the same. One time, 1,000 pipers and drummers paraded in Perth, Scotland for the Diamond Jubilee; the same number marched in a parade to welcome Pope Benedict XVI to Edinburgh on St. Ninian’s Day, 2010.

When New York’s Tartan Day Parade moved to 6th avenue for the first time in 2002, Orr was the event’s producer, gathering more than 7,000 pipers and drummers for the event. Many travelled to the Big Apple “to show their support after 9/11,” recalls Orr. When Sean Connery’s agent asked if the Academy Award-winning actor could be Grand Marshal, Orr thought someone was playing a prank on him until Connery showed up in his kilt on parade day.

That gathering 13 years ago set another idea into motion, “to have a Tattoo, inspired by the Edinburgh Tattoo, in New York,” says Orr.

“I have a great affinity with New York,” he explains. “Perhaps it was due to the great reception we had when we organized the first Tartan Day Parade. There are also a huge number of pipe bands in and around New York. The pipe band world is one big community, and it has been great working with a number of local pipe bands on this event.”

With an audience of over 700 – and impressive acts such as the West Point Military Academy’s brass ensemble, and the West Point Hellcats – last year’s inaugural tattoo was a smash success.

This year, three performances will take place on May 22 and 23. The event is moving to a bigger venue; a national historic landmark that is better equipped to highlight the large-scale production of military and massed pipe bands, Highland and Irish dancers and precision drill routines.

“When the opportunity came up to host the event at the 69th Armory, home to ‘The Fighting 69th,’ New York’s official Irish Regiment, I jumped at the chance,” shares Orr.

“Built in 1906, the main hall is over 200 by 160 feet and the arched ceiling is over 100 feet high. The Grand Finale, when all the bands play together will be spectacular! This year we hope to have over 100 pipers and drummers inside!”

Orr invites all to come enjoy the New York Tattoo, a showcase of Celtic and military traditions from Scotland, Ireland and North America. “I think the great thing about a Tattoo is it can present music and dance elements in a more formal environment with proper lighting and sound, so there is much more focus on the performance,” he muses.

“Our aim is to present a fast-paced show – indeed a musical journey back to Scotland and Ireland.”