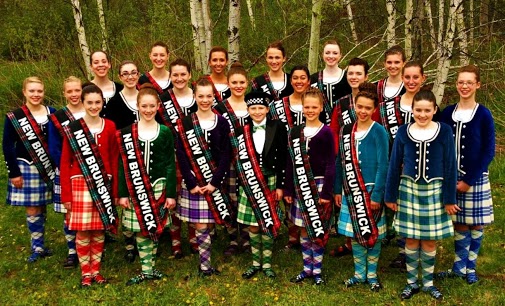 The New Brunswick Highland Games features some of the region’s top Highland Dancers. Recently we spoke with one of the event’s shining stars, dance Nicole Odo.

What are your own roots?
On my Mother’s side, my family’s background is English. On my father’s side, the last name Odo originated from Germany, but my family’s roots are in Cape Breton, which is actually what got me involved in Highland Dancing.

Who attends the event?
Everyone from people with Scottish roots, to people who are simply interested in seeing what we have at the festival.

What can they expect this year?
They can expect to see some new events, such as the Picaroon’s Keg Toss. There will be great entertainment, which includes local, and international talent. This year, the Highland Dancing is hosting the Atlantic Open Championships, as well as the Maritime Open Premiership. Like always, we have our ceilidhs, massed bands, the Kilted Run, Heavy Events, Clans and Associations, Whiskey and Beer Tasting, and all kinds of things for the children at the Kids Corner!

How has the festival evolved since last year?
I believe the festival evolves every year, as we all learn from past festivals and are always coming up with ideas on what we can do differently. However, this year, we are introducing a new heavy event, the Picaroon’s Keg Toss. And this year, we will be hosting the Atlantic Open Championships for Highland Dancing.

Will you remain involved with the event in the years ahead?
Of course! I will be competing for as long as I can, and I will always help out with organizing the Highland Dancing competition. Highland Dancing is something I’m passionate about, and helping out with the New Brunswick Highland Games here at home goes hand in hand with that.

How else are you involved with the Celtic community here?
On top of being a competitive dancer, I am also a dance instructor. Being both a dancer and a teacher has gotten me involved with various Celtic associations and performing at their yearly events.

Is enough being done to preserve and promote Celtic culture generally?
The Celtic community does a lot to preserve the traditions and the Scottish culture. As mentioned earlier, I perform at yearly traditional events, such as Robbie Burns Day, so I think that in that aspect there is a lot being done for this culture to try and promote it and to preserve these types of things.

What can we be doing better?
We should be making the public more knowledgeable about the Celtic culture. After all these years of telling people I’m a Highland Dancer, I still get asked if it’s like Riverdance, which is the complete opposite of Highland. It just goes to show that there is still a lot the public doesn’t know about this culture.