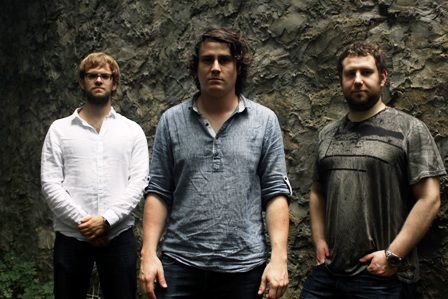 Toronto-based trio NUA is an innovative new trad trio, bringing a fresh and unique sound to traditional music, creating their own distinctive original compositions, balanced with traditional and contemporary tunes drawn from Irish and Scottish traditions. Recently we caught up with the band’s bodhrán player Jacob McCauley.

When and why did you start playing music?
All three of us were born into very musical families. I think it’s safe to say that it was inevitable that each of us would start playing music at a very young age. James and Graeme both began taking fiddle lessons together at the age of 3, with Graeme switching to Guitar around age 10. I began with Piano at age 4 and moved on to the Bodhran shortly after dabbling with the Drums, Bass and Guitar. With growing up in a musical family it can sometimes feel like you are being overly encouraged to begin studying music and learning an instrument, but I think I can speak for all of us when I say we were genuinely interested in learning music from a very young age. It was not just something we had to do because our parents encouraged us to, it was fun and rewarding to take up an instrument at such a young age. We wouldn’t be where we are today if we didn’t start so young.

Are they the same reasons you do it today?
It is most definitely still because we love to play music. But the ability to make a living through music is certainly not something we planned for from day one. I’m sure there were times we dreamed of being a professional musician, but the goal was always to simply have fun and enjoy playing tunes together. The simple difference now is that we still love to play music but we have the added bonus that we are able to make a living through doing what we love and we wouldn’t change that for anything in the world!

How long has the band been around?
Our trio was loosely formed in 2011 after several one-off gigs and some time spent learning tunes together. The majority of our focus shift to becoming a full-time group came in 2012 when we recorded our EP. Our EP was our first joint-project together and allowed us to have something to begin working on promotion and growth of the group.

How has the group evolved since that time?
Much of 2012 and the first half of 2013 was spent working on new material and preparing to record our debut album BOLD. Both James and Graeme were also finishing up degrees in Jazz and graduated in the spring of 2013 which finally gave us the time to give 100% focus to the group and our debut album. It was always difficult when James and Graeme were in school to find the time to rehearse and work on material. When we finally had the time, it was our first chance to take the challenges head on and put our full effort into releasing our first album as well as growing together as a trio.

Why the decision to start performing Celtic music?
To put it quite simply…it is the music we grew up with and have spent the majority of our lives practicing, playing and performing. We all feel a deep connection to Celtic music and it’s what we enjoy most to play. We all have dabbled in other genres of music as well, however Celtic music is what we always come back to and what drives us to be the musicians that we are today. We enjoy playing all forms of Celtic music whether it be Irish, Scottish, or Canadian, traditional music or modern. There are so many tunes out there and so many different styles and traditions that it makes it exciting to explore the possibilities. Putting our own take or style on Celtic music is just an added bonus and something that gives us the chance to add to the tradition that is evolving as all music does over the course of time.

How would you describe your sound today?
We are essentially rooted in the traditions of Irish and Scottish traditional music but our own sound has evolved from the traditions to take on a much more modern and progressive sound. We most definitely never want to leave our traditions behind, but we also have a desire to push the boundaries of traditional music. The majority of Celtic groups these days play traditional tunes, whereas the majority of tunes we play are our own original compositions. We do occasionally throw in a traditional tune or a more recent traditional composition, but our sound is primarily based upon our own writing. When listening to our album you will undoubtedly hear a variety of different influences.  Celtic music being at the core, with a very strong Irish and Scottish feel, but there are also many hints of Jazz, Rock, Fusion and World Music that come out. It’s not something we necessarily planned on, but it’s just a natural occurrence in our writing as we all have shared experiences in many other genres of music. We like to challenge ourselves with the tunes, whether that means throwing in crazy time-signatures, complex rhythms, arrangements or a tune that has a more traditional feel but is uniquely our own. We don’t ever plan for a tune to be crazy or alternatively to be more traditional or simple, it just depends on how we feel that day when we compose the tune and what creative juices are flowing. We very much enjoy doing something that is new and fresh to our ears. It makes us happy and we only hope that we can give people the same feeling we get when we play our tunes together.

Is your creative process more ‘inspirational’ or ‘perspirational’?
Our creative process stems from a variety of different circumstances depending on where our mind set is. We most definitely become inspired by other music we like or groups that have influenced us over the years, but it’s difficult to say how or why we write tunes in a certain way. Quite often it can just depend on our mood and what’s going through our mind at the time of writing. Perhaps we were just listening to a favourite group of ours and became inspired, or perhaps we were simply just noodling around without intending to write something but ended up with a new tune.  The process is not always the same. I think if it was then it would be difficult to write a wide variety of tunes that don’t sound too similar.

What makes a good song?
I think that can entirely depend on ones opinion of what they consider to be a good song or tune. In terms of our own tunes, we write tunes that we enjoy playing and that stand out to us as something fresh and unique. It’s such an exciting process to write new tunes as it’s something that is truly our own expression of music. However, there is of course the chance that someone else may not feel the same way we do about the tune. But that’s the nature of being a musician and taking the chance of writing your own tunes.  You’ll never please everyone, but ultimately what it comes down to is you feeling proud and happy of your composition. It’s up to the listener how the tune speaks to them and if they enjoy listening to it.

What inspired the new recording?
The decision to record a new album already after only releasing our debut album BOLD in late 2013 came when we realized we had starting writing new tunes only a few months after BOLD was released. I’m sure any musician/composer will tell you that you never really stop the creative juices from flowing. By the spring we had several new tunes written and began rehearsing some for upcoming festivals. It kind of dawned on us shortly into the rehearsals that it would be great to continue our writing and record a new album at the end of the year. As happy as we are with the success of our debut album, we know that we are still growing and improving as a group and that’s something we know will be apparent on our next album.

What has the response been like so far?
We’ve been fortunate to receive a very good response after our first release of our EP and especially after the release of our debut album BOLD. As we are doing something a little different than your average Celtic group it can be a bit of a risk to how you will be perceived. However, we feel passionate and confident about our music and it has been wonderful to get the positive feedback from so many sources over the last 2 years. It certainly helps us feel that the risk is well worth the reward. There is truly is nothing better than seeing people enjoying our music and being able to appreciate the hard work that we have put into it all.

What does the band have on tap for the rest of 2014 and into 2015?
Our main focus for the rest of 2014 and the beginning of 2015 is to have our new album recorded and released. We are currently still in the writing process and are planning to enter the studio towards the end of the year. Besides a few gigs here and there over the next few months, our ultimate goal is to finish writing the new album and work out all the arrangements so when we enter the studio we are ready to lay down everything in the short time we are in the studio. We haven’t set a release date as of yet, but early 2015 is the goal so we may coincide the release with hitting the festival circuit in the spring/summer.

Is enough being done to preserve and promote Celtic culture?
Celtic music has definitely spread out and gained exposure in recent years throughout many countries. There are so many Folk and Celtic festivals these days that it’s become sort of an underground phenomenon of people interested in traditional music. Just look at a list of festivals in Canada and the U.S alone and one can see how vast the music has spread.

What can we be doing better?
It’s hard to say what we can be doing to better preserve and promote Celtic music. I think we are on the right path in terms of promoting the music and the culture, but the music is still very underground in most places and a lot of people just don’t know much about it. The genre of Folk has become so diverse that Celtic music can often get lost in the vast amount of different groups and artists sharing the music scene. Quite often Celtic music groups will get put into the Folk category and end up competing with a fairly broad range of musical acts.  I think it would be beneficial to help promote Celtic music as a sole genre and something that stands apart from your more well-known Folk styles.