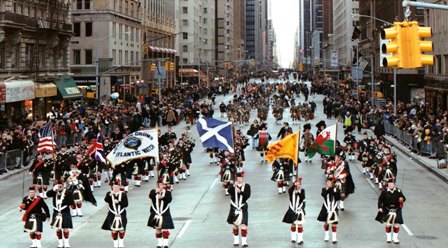 Interviewed by the Carluke Gazette, John Dickman of the Lanark & District Pipe Band said, “It’s the biggest Scottish celebration held in the States and we’ll be very proud to be playing a part in it.” Dickman was talking about the New York Tartan Day Parade. His pipe band is one of the contingents travelling from Scotland to march down 6th Avenue in NYC on April 11th.

“The Parade and other celebrations during Scotland Week [Tartan Week] mark the signing of the Declaration of Arbroath, which recognised Scotland’s independence and inspired the American Declaration of Independence,” explains Katrina Tweedie, editor of Scotland Now, the official Scottish media partner of the New York Tartan Day Parade. “We’re proud to support the many thousands of people, for whom Scotland remains important, who will march through the streets of the Big Apple.”

After the U.S. Senate officially recognized Tartan Day in 1998, Alan Bain, Chairman of the American Scottish Foundation, was tasked to organize a Tartan Day celebration for New York City. The first New York Tartan Day Parade happened in 1999. Organizers and participants had to stick to the sidewalks as they had not yet secured a parade permit.

“It was early on a Saturday morning, we had a group of people, a couple of pipe bands, and the sidewalk had not been really cleared, so we were having to dodge dustbins and other paraphernalia,” chuckles Bain, who is also serving as President of The New York Tartan Day Committee this year. “But everybody really enjoyed the spirit of the moment!”

Now, thousands of people march in the annual event, while 30,000 or more line the streets to watch; and parade organizers are expecting even more people coming from Scotland this year.

“Every year, we have a youth band come over,” says Camilla G. Hellman, MBE, Executive Director of the American Scottish Foundation. “This year we have the Oban High School Pipe Band coming over. It’s wonderful to see these youth bands, which are absolutely fantastic, performing. We organize concerts now at lunchtime in Bryant Park in the days leading up to the parade and on the morning of the parade.”

Interest from groups across the United States is also keen, adds Hellman. For example, contingents of Outlander fans from Chicago, Boston, Philadelphia and other areas have already registered to march, she says.

A number of events, from ceilidhs to exhibits, take place leading up to the parade, including a Tartan Day Observance on April 6th, which Hellman initiated.

Belhaven, the producer of Scotland’s top ale, is the Official Beer of the Parade, and will host a number of events throughout the week, such as beer and dinner tastings and a “tap takeover” at one of the city’s most popular Scottish pubs, the Caledonia.

“George Howell is our master brewer and he’s got 22 years of experience brewing Belhaven,” adds Gordon Muir, marketing manager for Belhaven. “He’ll be coming over to Tartan Week and we will be hosting numerous tastings and ‘Meet the Brewer’ type of events.”

Belhaven’s export manager, Sonia Lawrence, is excited to be a part of this year’s festivities.

“All of the events around the parade will provide so much fun for people, a lot of whom will have travelled a long way to come to New York just for this week,” says Lawrence. “We can’t wait to be a part of that fun and showcase the best of our beers.”

It is not too late to register to march in this year’s parade and it is free to participate. If you do not belong to any organization or clan, you can register as an individual and march with one of the organizer groups, such as the American Scottish Foundation; individual musicians can join the parade’s Massed Band.

The National Tartan Day New York Committee is made up of several local Scottish organizations. As the committee continues to grow the New York Tartan Day Parade, it still remembers what it is all about.

“The Scots were so much part-and-parcel in the beginning of this country,” says Bain. “The purpose of Tartan Day is to educate our fellow Americans of the role Scots had and continue to play.”