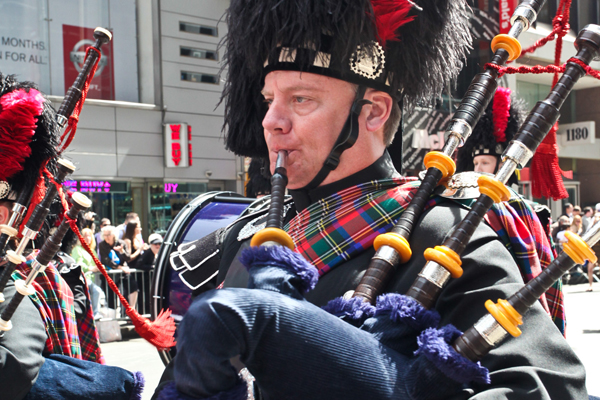 Everyone loves a parade – and one of the largest may well be tomorrow’s New York City’s Tartan Day Parade.

This year some 2,500 marchers, pipers, dancers, horses and dogs are expected along the route, with an estimated 20,000 people watching from the sidelines. Heather Quist, who helps handle publicity for Tartan Week, enthusiastically says: “We have people visiting from across the U.S., as well as Canada, Scotland, and around the world. Thousands of people in the tri-state region come for Parade Weekend – and then there are just regular New Yorkers lured by the sound of the pipes!

Most of the parade participants come from the tri-state region, but every year bands arrive from all across the U.S., Canada and Scotland to play and march. Quist says many of the bands save up for two or more years in order to be able to make the trip. To be sure, the website declares that the best part of Tartan Street is “marching up Sixth Avenue to the cheers of thousands!”

Surely though, a close second must be the pre-parade ceilidh with lots of singing, dancing, foot-stomping and food and drink at the New York Caledonian Club. Then, of course, there’s the post-parade party at Desmond’s Steakhouse. Tickets for the first 60 pipers who turn up with their pipes are half-price, $20. Notes the steakhouse: “You’ll not be discouraged from playing; on the contrary, that’s why we’re enticing you with cut-rate tickets!”

In the midst of planning for the 2002 event, the 9/11 terrorist attacks in New York looked as if they might halt the event. Instead, the reverse happened: more and more groups began calling, wanting to participate. Ultimately, more than 7,500 Scottish, Irish, Canadian and American pipers and drummers marched along Sixth Avenue, with Sir Sean Connery and city mayor Michael Bloomberg leading them.

Of course, beyond the parade, Tartan Week is packed with events. Two, 15-foot tale scale models of Glasgow-born artist Andy Scott’s The Kelpies will be on display in Bryant Park. The actual sculptures near Falkirk are two, 100-foot steel horse’s heads. Scott says the sculpture plays tribute to Scotland’s heavy horses, which played a vital role in agriculture and industry in Scotland. Some 250,000 people are expected to see the models during their time in New York City.

Two of the biggest events are the Kirkin’ O’ the Tartan and Breakfast, which the St. Andrew’s Society hosts; and VisitScotland’s Scotland Run, a 10 km through Central Park. The former event is a non-denominational church service followed by a traditional Scottish brunch. The latter event is expected to attract some 7,000 runners. Sums up Quist: “Tartan Week celebrates the Scottish people’s contributions to the U.S. – past, present and future. We welcome everyone to join us.”