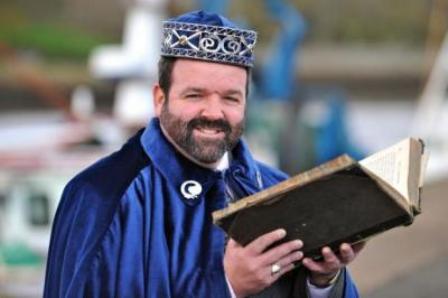 Executive Director of Gaelic Affairs for the Province of Nova Scotia, Lewis MacKinnon, shares his perspective on what it means to be Celtic.

Hecataeus of Miletus, the Greek geographer, made the first recorded use of the name Celts in 517 BC, when writing about a people living near Massilia (modern day Marseille, France).  According to the testimony of Julius Caesar and Strabo, the Latin name Celtus (pl. Celti or Celtae) was borrowed from a native Celtic tribal name.  Pliny the Elder cited its use in Lusitania as a tribal surname, which epigraphic, or inscription findings, have confirmed.

The term Celt is a modern English word, first referenced in 1707, in the writing of Edward Lhuyd, a Welsh linguist, whose work, along with that of other late 17th-century scholars, brought academic attention to the languages and histories of the early inhabitants of Great Britain.

Celtic refers to a family of languages and, more generally, means “of the Celts” or “in the style of the Celts.”  Several archaeological cultures are considered Celtic in nature, based on unique sets of artifacts.

The link between language and artifact is aided by the presence of inscriptions, or early writings.  The relatively modern idea of an identifiable Celtic cultural identity or “Celticity” generally focuses on similarities among languages, works of art, and classical texts, and sometimes also among material artifacts, social organization, homeland and mythology.

There are two branches of the Celtic language family that have persisted down to the present day: the Brittonic (British) & Goidelic (Gaelic) branches.

The Gaelic branch includes Irish language (some refer to it as Irish Gaelic), Scottish Gaelic, Gaelic in Nova Scotia (which has Scottish Gaelic as its origins) and Manx Gaelic.

Today, people who possess, participate in and support a Celtic language and its attendant (i.e. accompanying) cultural expression use the following terms to identify themselves and the Celtic language they speak or to which they have affinity:

In comparison, the English language is a member of the Germanic family of languages which also includes German, Dutch, Alsatian, Afrikaans, Frisian, Scots, Icelandic, Faroese, Norwegian, Swedish and Danish.

The attendant cultures of the respective Celtic languages contain within them the expression of the people who participate in and share the same.  These cultures encompass poetry, song, music, dance, stories, traditional dress, foods, customs, worldview, other-world beliefs and spirituality.  These can be viewed as the ethnic identities of peoples that come alive through their respective Celtic languages.

While Celtic language-based communities use terms from their respective languages, and attendant cultures, as identifiers that communicate to each other and the broader community who they are, in the modern period the term Celtic has been used in a variety of ways by a variety of individuals and groups to mean a variety of different things.

For the Gaelic Community in Nova Scotia, those who speak Gaelic and participate in Gaelic cultural expression – and those who support and identify with these people – there seems to be consensus that it is important to assert the community’s identity in its own linguistic and culturally-based terms.

Asserting a clearer voice has helped to elevate the Gaelic language and cultural assets the community possesses and for which it is well known and of which it readily shares with local residents and visitors.

Understood in this context, the term Celtic is a reference point in that it communicates that the Gaelic language Gaels in Nova Scotia speak has common connecting points with other languages in the broader Celtic language family group.

Identity, in the case of the Gaelic Community in Nova Scotia, is most accurately reflected through terms that reference the language and culture, and the people who speak and support and participate in them: Gaelic and Gaels.