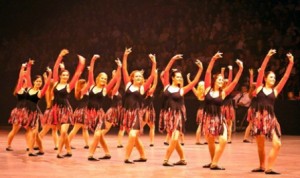 What is your own ethnicity / heritage?
My Great Grandfather was a Scot. I really became involved with highland dancing  because I showed promise and  my dance teacher encouraged me to go down this path in preference to other dance forms. I certainly have a passion for highland dance, firstly as a competitive former champion dancer, secondly as a teacher and judge throughout the world, and thirdly as Dance Director and Choreographer of OzScot Australia. I received an OAM (Order of Australia Medal) for services to highland dancing).

When and why did you get involved with this event?
I became aware of The RNSIT when I first met Ian Fraser at a meeting in Edinburgh Tattoo Head  office some years ago in 2004 I think. When I finished performing in Oman in 2005, with a team of 64 in my own right, I was looking for a suitable Tattoo to launch my choreography and team in its own right in preference to performing with combined teams, as I had done in previous years. I then made some enquiries about the form that the RNSI Tattoo took and of course made contact with Ian Fraser to see if he was interested in having OzScot. Our first performance at the RNSIT was in 2008.  Our style and choreography was very much a first for the tattoo world as I began to push the boundaries. Then we again performed in Halifax in 2011 and of course again this year.. I like OzScot performing in The RNSIT as they give me the freedom to perform choreography of my own style to music of my choice, and they encourage me to do my own special style of contemporary highland dance which OzScot is known for.

What are the rewards of being involved?
RNSIT is a very user friendly tattoo. The RNSIT are an excellent team to work with. It is a great event for the girls. The situation of the metro is ideal for international teams as we have time to enjoy and explore Halifax. The accommodation at St Mary’s is good and provides us with the comforts we need after an extremely long trip into Halifax and rehearsal time on the ground. The Tattoo itself is excellent for the team. The show is fast paced, it provides a great variety of international acts, but still retains the necessary tattoo content to make it the success that it is. It also encourages the young performer and this gives the dancers the opportunity to make long term friendships with people of similar age. I like the indoor venue…. This means that the weather does not control/affect your performance. The audiences are always receptive and responsive to a good performance and the venue is intimate to perform in giving the performer feedback from the audience whilst performing. The experience the girls take away from this event is quite life changing and being introduced to the tattoo family world wide is very special.

Why is it an important event for the community there?
It is a great event to introduced new performers to the world of tattoos. We get good rehearsal time which is so important to our team as our first rehearsal together as a team is when we arrive in Halifax. The dancers in this group come from all over Australia so on arrival in Halifax means our first rehearsal together. The Tattoo fits with our School/ University Holidays… Which is a bonus for the dancers. It very much allows Celtic connections and the development of Canadian/Australian relations, friendships and exchange of ideas. It allows the opportunity to work with the Nova Scotia Dancers and their Choreographers. It is a cultural education for the team.

How else are you involved with the Celtic community?
I teach highland dance for both the competitive dancer and the dancer who wants to be involved in entertainment at Celtic Events. I also judge and do workshops throughout Australia. I organize and run a Dancing Competition at the local Games. My husband is a piper, my elder son travels to Scotland every year to pipe, my younger son is a drummer, my grandson is learning the pipes and my two grand daughters both do highland dancing.

Are we doing enough to preserve and promote Celtic culture generally?
I think that you seem to be succeeding in Nova Scotia. You still have a very strong Celtic tie with music, dance and other Celtic pursuits throughout the Nova  Scotia area. In Australia it is getting harder to achieve this, due to the change in immigration policies and cultures. We no longer have the number of British coming into Australia. We maintain the number of dancers involved in competition but struggle to grow our base. There are Highland games and various Scottish societies throughout Australia which continue to promote all things Celtic.

What can we be doing better?
Difficult for me to give a constructive answer on this question particularly here in Australia. My involvement has always been at the Canadian Championships which is a fantastic well organized championship for highland dancing or at the RNSIT. I have of course done the tourist routes around Nova Scotia and other parts of Canada  and enjoyed all that is available including the music and dance, people  food and wine.