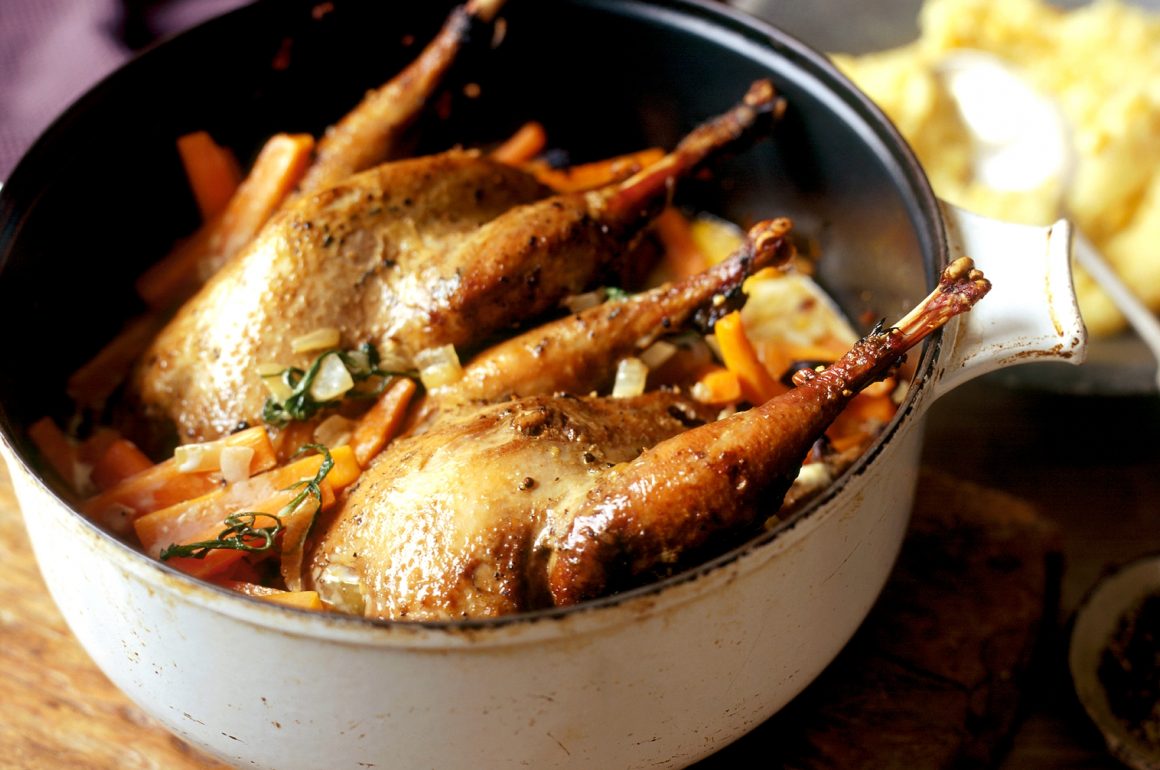 Pheasant is an iconic and beautiful bird that was brought to the U.K. as early as the 11th century by the Normans. Pheasants were introduced in North America in the 18th century and have become well established throughout much of the Rocky Mountain states, the Midwest, the Plains states, as well as in Canada. It is also found on menus all over Scotland. I spent a number of years working for the largest feathered game producer in Scotland. They have been instrumental in obtaining these birds from estates all over Scotland and northern England. This recipe was inspired by a dish called Chasseur, or Hunter’s Chicken. It is a one-pot wonder and the pheasant cooks without drying out. If you cannot find a pheasant, then this recipe works well with most game birds and with good quality chicken.

Pre-heat the oven to 160°C/325˚F. Cut the pheasant into 4 pieces (splitting legs into thigh and drumstick and cutting the breast in 2). Heat a sauté pan with the oil, then add butter. Once foaming, add the seasoned pheasant pieces. Sauté over a reasonably high heat, turning and allowing the pieces to become golden in colour. Add the baby onions and the bacon, allowing to colour. Remove the pheasant from the pan and place to one side, then pour off any excess fat. Place the pan back on, add the mushrooms and cook until you have achieved some colour. Next, dust in the flour, making sure to stir it in until there are no lumps. Then add the white wine and bring to boil. Reduce by ¾. Add the stock and reduce by ½. Next, add the tinned tomato, the cherry tomatoes (halves) and the tarragon. Pop the lid back on and place into the oven for an hour. If you don’t have a pan that works for the oven you can pour the mix into a large casserole dish and cover with foil. Remove from the oven once the timer goes, then seasoning with salt and pepper. Finish the sauce with a squeeze of lemon juice to enrich the flavour.