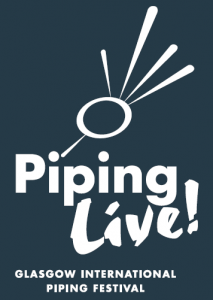 Glasgow, Scotland will host the world’s biggest-ever week of piping and traditional music from August 11-18.

Piping Live! Glasgow International Piping Festival will celebrate its 10th birthday with new venues and a week long programme of exciting performances, workshops and concerts, while The World Pipe Band Championships will take place over two days for the first time ever.

The programme for both events was launched with a little help from members of the National Youth Pipe Band of Scotland who unveiled a set of the country’s biggest bagpipes at St Enoch Square to represent the scale of this year’s festivities.

St Enoch Square will act as the new hub for Piping Live! while George Square undergoes some changes, and will offer a brand new performance tent featuring and daily performances by some of the best folk musicians and pipers from across the globe. The square will also have delicious food and drink on offer and will host the popular Craft Clachan stalls offering a whole host of Scottish crafts and products for the public to browse and buy.

Concert highlights include the Pipes and Strings concert featuring globetrotting acts from Canada, Scotland and Galicia on the Wednesday evening and award-winning ‘Brave’ singer, Julie Fowlis, headlining the Gaelic Music Concert on the Thursday night of the festival. Both of these concerts will be hosted at another new location for the festival – The New Atheneum at the Royal Conservatoire of Scotland, where the Tuesday night International Quartet Competition will also take place. New Folk Friday at The Arches will feature three of the most exciting modern collaborations on the folk/piping scene – a concert not to be missed.

Says Piping Live! Festival Director Roddy MacLeod: “Over the last ten years we have brought the best pipers and traditional musicians from all over the globe to perform at the festival. It has been brilliant to see the interest in piping grow and to expose so many people to the diversity of the pipes – we’ve seen everything from the best solo pipers in the world perform to bands that mix the pipes with electronic music and it just gets more exciting each year. We also have a few surprises up our sleeves so come join celebrate our birthday with us this August.”

The spectacle of The World Pipe Band Championships at Glasgow Green will be more incredible than ever, with two days of competition and fun for the first time on Saturday 17th and Sunday 18th August. Field Marshal Montgomery Pipe Band from Belfast, will be hoping it is third time lucky as they battle to retain their 2011 and 2012 World Champions titles against bands from around the world. As well as enjoying the bands compete, spectators can enjoy Highland Dancing, Highland Games, great food and drink, fairground rides and a huge family fun zone.

Ian Embelton of the Royal Scottish Pipe Band Association says “With over 200 bands coming from 11 countries to compete, we have listened to feedback from spectators and fans and we are delighted to extend The Worlds to two days. Families and music fans will have more time to see the bands compete alongside the other activities on offer. There will be a range of ticket packages available making it easy for people to make it a very special weekend.”

Councillor Gordon Matheson, Leader of Glasgow City Council and Chair of Glasgow City Marketing Bureau, said: “Piping Live! and The World Pipe Band Championships are the real highlights of Glasgow’s cultural calendar over the summer, drawing thousands of visitors from across the UK and overseas and providing a significant boost to the local economy. Both events are celebrating major milestones this year, with Piping Live! marking its 10th birthday and the Worlds expanding across two days, which will deliver a truly spectacular week of superb traditional Scottish music and culture, and reinforce that Glasgow in August is the visitor destination to experience world piping of the highest quality.

“Over the coming weeks, city partners will be rolling out a multi-channel marketing communications campaign across Scotland and Ireland – comprising TV, radio, print, outdoor and public relations activity – geared at showcasing Glasgow’s position as the epicentre of global piping and just what an amazing spectacle both of these events are.”

Paul Bush OBE, Chief Operating Officer for EventScotland added: “Piping Live! and The World Pipe Band Championships continue to be a highlight on Scotland’s annual event calendar, positioning Glasgow at the centre of the global piping community. Scotland is the perfect stage for events and with Piping Live! celebrating its 10th anniversary and the Worlds now filling two days on Glasgow Green, the 2013 programme promises to be bigger and better than ever.”

Last year, both events welcomed over 50,000 spectators and more than 8000 musicians to Glasgow, but this is expected to increase in 2013, in line with the larger scale.