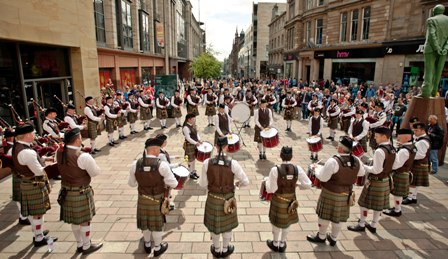 It is a tribute to the international status of Piping Live! that the one thing that gives its founder, Roddy MacLeod, cause for nervousness in the run-up to this celebration of the piper’s art is the potential for hiccups involving foreign travel.

Now in its 12th year, the event, which hosts concerts, recitals, competitions and informal sessions in venues across Glasgow from Cottiers Theatre in Hyndland to Glasgow Green, is well established not just among pipers and piping aficionados but with a general audience which, like the participants, now comes from almost all corners of the world.

“When we started Piping Live!,” says MacLeod, who is the Principal of the National Piping Centre and a much revered and decorated pipe major and internationally regarded solo piping recitalist and competition adjudicator, “we wanted to have something that showcased the skills involved in piping of all kinds. We already had the World Pipe Band Championships, which brings huge crowds to Glasgow Green every year, and there would be a concert during the week running up this in Glasgow Royal Concert Hall featuring one of the top pipe bands. But we felt there was scope for more events that would really celebrate piping and let people hear the huge range of styles and music involved.”

Being well-travelled himself as a performer and judge, MacLeod was already well aware of the strength of piping in the folk traditions of places such as Brittany, in France, and Galicia and Asturias in Spain, and the interest in pipe bands in the US, Canada, Australia and New Zealand and South Africa. Even he, however, has been surprised to discover just how prevalent the bagpipe, in various forms, is across the world.

“We tend to think of the pipes as an instrument that we gave to the world and there is quite a concentration of pipe bands, particularly in the English-speaking world,” he says. “But there are piping traditions everywhere and some fantastic players out there. The internet has made more and more of them available to us on computer but there’s no substitute for hearing these musicians in person and it’s been one of the great rewards of staging Piping Live! to bring exciting new names to Glasgow and introduce them to the audience here.”

On the opening Monday alone, audiences will be able to hear Italian, Swedish and Bulgarian tunes as well as the more familiar Breton, Irish and Scottish repertoires and as a measure of Piping Live!’s international appeal and reputation, MacLeod is looking forward to welcoming visitors from Japan, Malaysia and Brazil.

“We’ve definitely become established as a tourist destination and as an event Piping Live!, along with the World Pipe Band Championships, is bringing money into the local economy,” says MacLeod, who was appointed MBE in 2003 for services to piping and inducted into the Traditional Music Hall of Fame in 2012 for his contribution to the playing and promotion of bagpipe music.

With George Square becoming available again after being out of commission due to renovations and the Commonwealth Games over the past two years, Piping Live! can once more literally take the music to the people with outdoor performances by international pipe bands and solo players. A street café set up outside the National Piping Centre in McPhater Street will also host events with live music all day and the Pipe Idol talent competition running from Monday to Thursday.

For MacLeod, the future of piping looks very healthy and as regards the future of Piping Live! he has no shortage of ideas, including one that’s particularly close to his heart as a renowned exponent of the classical music of the bagpipe, pibroch.

“I’d really love for one of the big orchestras to incorporate pibroch into its program,” he says. “There have been projects before that showed the power and majesty of this music in a different setting from what we’re used to. Alan MacDonald’s pibroch series for Edinburgh International Festival was one and Neil Johnstone, the cellist, whose dad was a great piper and pipe music composer, produced another one very successfully with strings. But a full orchestra playing pibroch with some of our greatest piping talents would be a fantastic way to close Piping Live! one of these years.”