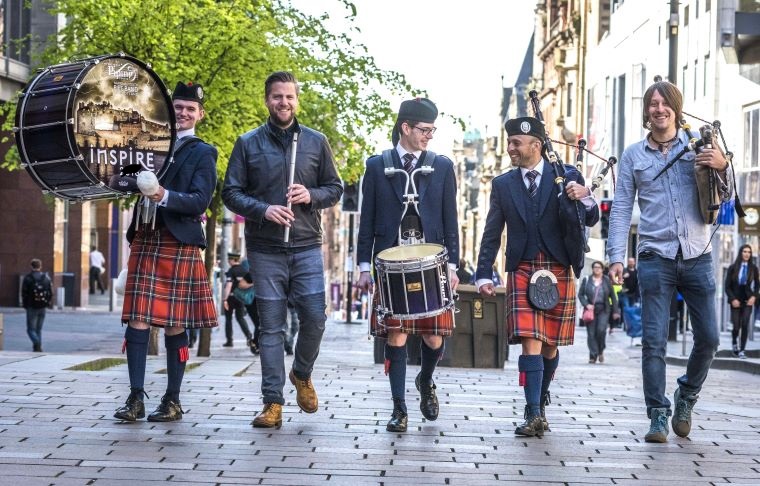 Piping Live! will return this summer with a calendar of in-person and virtual events from Saturday 6th – Sunday 14th of August.

The world’s biggest piping festival celebrates its return to the full in-person program for the first time since 2019, offering a blended showcase of in-person gigs and online events, so both local and international audiences can enjoy the array of world-class performances.

Now in its 19th year, the festival annually attracts over 30,000 attendees to Glasgow. The Piping Live! team, with thanks to their funding supporters Glasgow Life and EventScotland, have put together an eclectic and varied programme, including world-class performances, music sessions, recitals, talks, competitions, book launches, workshops and so much more.

Finlay MacDonald, Artistic Director for Piping Live!, said: “We are delighted to be returning to our full programme of in-person events for 2022. We are looking forward to welcoming back pipers and drummers from across the globe with a line-up of new events and festival favourites. We are also really pleased to be able to offer a livestream of so many events as we know there are still many who can’t make it to Glasgow for this incredible week of music.”

The headline event of this year’s Piping Live! will take place at the Old Fruitmarket with the multi award-winning folk band RURA, alongside the hugely talented multi-instrumentalist Ross Ainslie and winner of the 2019 BBC Radio 2 Horizon Award and 2016 BBC Radio 2 Young Folk award, Brìghde Chaimbeul. RURA started their journey as a band 12 years ago as one of the “emerging talent” groups at Piping Live!’s Street Café. Since then, they have gone on to tour the world and this summer the band will headline the very festival that launched their career over a decade ago.

Piping Live! prides itself on being at the centre of the international piping community and year on year it extends a hand of musical friendship to artists and audiences across the world. Liana Sharifian, the first ever Iranian professional female piper and daughter of the legendary Mohsen Sharifian, will perform alongside her father as well as Habib Meftah. There will also be artists from Estonia – Est Pipes – Uilleann Piper Leonard Barry, and Hungarian duo Balázs Istvánfi & András Németh will perform their traditional-based contemporary modal music on bagpipe and hurdy-gurdy. 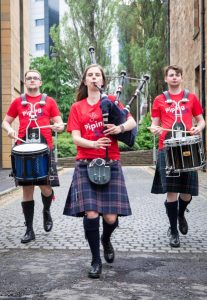 The Pipe Major Alasdair Gillies Memorial Recital Challenge, Piping Live!’s flagship evening of solo piping, will make a welcome return this year. The competition will pit five top pipers against each other as they take to the stage to perform a medley of their favourite tunes. Annually a sell-out success, performances this year will come from Callum Beaumont, Finlay Johnston, Sarah Muir, Angus MacColl and Matt MacIsaac.

The International Quartet Competition will feature six of the top Grade I pipe band quartets in the world, including the Simon Fraser University band and Shotts and Dykehead Caledonia. Each of the six bands from across the world will send four of their best pipers to compete in this head-to-head challenge.

There will be a performance from Allan MacDonald, alongside his hand-picked band of Iain MacFarlane, Finlay MacDonald and Ali Hutton with a guest appearance from Uilleann Piper Leonard Barry. This evening’s entertainment, entitled We’re a Case the Bunch of Us, will see Allan MacDonald present music from his collections The First Hundred and The Second Hundred. This will be a double header gig, with a performance from Biera, the up-and-coming all female group who bring together roaring Scottish tunes with stunning songs in Gaelic, Scots and English.

A special performance will come from the for the National Youth Pipe Band of Scotland (NYPBS) to celebrate its 20th birthday at Glasgow’s City Halls. The band will showcase 10 new compositions that have been written as part of their Emerging Composers project. The bespoke ‘project band’ will feature the 10 young composers themselves as well as NYPBS Pipers and Drummers alongside a host of leading traditional musicians.

The nine-day festival will showcase several piping competitions including the highly esteemed Silver Chanter, which will make its return to Skye. The pioneering piping event, now in its 56th year, is the annual invitational Piobaireachd competition that was established by Dame Flora MacLeod, 28th Chief of MacLeod, in 1967 with the aim of encouraging more top pipers to compete at the Skye Gathering. The esteemed competition came under the stewardship of the National Piping Centre in 2018 but it will now make a welcome return to Skye’s Sabhal Mòr Ostaig this August.

The Masters Solo Piping Competition will take place at the National Piping Centre. This prestigious competition is the qualifying event for the Glenfiddich piping competition and will see the best soloists from across the world compete in Piobaireachd and Light Music.

Piping Live! continues to host an eclectic mix of world-class performances and opening night will be no exception as the festival showcases a performance for the first time for an Avant Garde “Ceol Nua” or New Music piping night featuring USA’s Blarvuster and Skye’s Malin Makes Music.

Piping Live!’s final day will feature 2 fantastic events with entertainment starting in the afternoon with the internationally renowned Gordon Duncan Memorial Competition. This unique event continues to celebrate Gordon’s links to Scotland, Ireland and Brittany. One Scottish, Irish and Breton piper and in person for the first time, an international piper will each play sets of Scottish, Irish and Breton music and the overall winner will be the best player of all three musical styles. 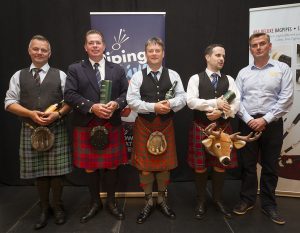 The closing concert will see no other than the legendary piper Fred Morrison Trio take to the National Piping Centre stage, alongside his trio. Paddy Keenan, one of the founding members of the Bothy Band, will close the 19th festival alongside Fred in unforgettable style.

Day time events, which will primarily take place at the festival’s iconic Street Café on McPhater Street, will include the ‘Emerging Talent’ stage where daily shows will be performed by up-and-coming trad music groups, including GLASTUR, the Ross Miller Trio, Falasgair and Fionnlagh with Gillie O’Flaherty and Eoghainn Beaton.

The Pipe Idol Final will see four solo players aged 21 and under compete after winning their heat earlier in the week. The much-coveted prize is a set of Fred Morrison’s Reel Pipes.

Pipe bands from across the globe will perform on Buchanan Street from 12noon each day of the festival, including artists from Canada, the USA and Argentina.

Virtual audiences from around the world can enjoy around 40 hours of live stream content which is all included in one Livestream Festival Pass. Content that will be included in this online festival pass will include The Silver Chanter, The Masters Solo Piping Competition, The Allan MacDonald – We’re a Case the Bunch of Us Concert, the Lowland & Borders Pipers’ Society Showcase, The Pipe Idol Final, The Gordon Duncan Memorial Competition and the closing concert with Fred Morrison and Paddy Keenan. Several daytime events and the Learn at Live! workshops will also be streamed.

Bailie Annette Christie, Chair of Glasgow Life said: “Anyone who has attended Piping Live! in the past or who knows what it’s like to be in Glasgow in August when the city comes alive with the skirl of the pipes, will be keenly anticipating this year’s festival. Piping Live! is a truly international festival, bringing performers and audiences to Glasgow from around the world with the majority attending coming from outside the city, boosting Glasgow’s tourism economy. The performances, concerts and events offer unmissable experiences of being part of a live audience enjoying some of the finest musicians in the world. If you love live music, you will love Piping Live!”.

Paul Bush OBE, VisitScotland’s Director of Events, said: “EventScotland is delighted to be supporting Piping Live!, a key part of Scotland’s annual portfolio of events. Events play a key role in our communities and this year’s programme offers a wonderful opportunity to for audiences to connect, enjoy and share memorable moments across a range of performances, competitions, recitals and workshops whether it’s in person or online.