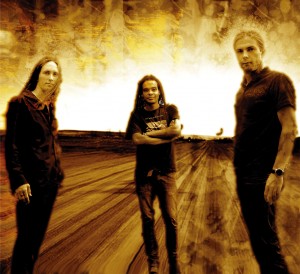 Breton-based band Plantec is at the very leading edge of Celtic music. Their latest release, Awen, has received rave reviews for its avant-garde approach to traditional melodies. Recently Celtic Life International caught up with founding member Yannick Plantec to discuss the group’s past, present and future.

What inspired you to put the band together?
The story begins in 2002 in Brittany, in the town of Ambon with my brother Odran. I play the guitar and Odran the bombard (a traditional Breton woodwind instrument). At that time no one had heard the name Plantec, much less our music. We decided to contact the Festou-Noz organizers and other associations in order to play for free between the headline groups, often in exchange for just bed and board. This continued for about a year, after which our name began to circulate. The following year we had about forty gigs scheduled, and it is from this period that our adventure really took root.

Are they the same reasons that you do it today?
Yes indeed, it is still the same reason and the same desire as at the start; to play music together with my brother. Our first album was Démolive (produced but not distributed). Then came Reverzhi (quartet with bass and Breton bagpipes). The third album, simply called Plantec, was our first electronic album. The following recording, A-raok, was when we really found our own voice with the addition of Mael Lhopiteau (singer and harpist). This was followed by a live CD / DVD recorded at the Rennes music hall, representing pieces from the previous three albums. We then began composition and production of the album Mekanik, the most rock-oriented of our recordings, which was produced by Roli Mosimann (That Petrol Emotion, The Young Gods, The The, Celtic Frost, New Order….) Once it was “in the box”, my brother and I went to Poland for three weeks to mix the record with Roli. After touring for two years with that album, we started working on Awen with Gab (Djibril) N’dombi, a long-time friend and contemporary musician.

What are the challenges of the profession?
The main point is to be creative, to always re-invent and have lots of energy and joy to communicate with the public – every gig, every album. It’s been ten years since we started performing on stage, and the challenge is almost always the same: take the maximum pleasure in playing music together. During all these years of composing, recording and touring, my brother and I have been able to fulfil our musical desires and we have been fortunate to have a production company that supported us, without imposing any artistic direction. Each new album is a new beginning, a new window to be opened, in which we try to create a unique world. I think this is the challenge of our musical life.

What are the rewards?
The rewards are simple, the appreciation of an audience at the end of a song, letters from fans, the “good” articles in magazines…and playing concerts at big venues like the ‘Stade de France’. Playing festivals in Belgium, Switzerland and Germany are all magical moments also. We met a young woman recently who came to see us at the end of a concert, to buy our latest album. She explained that she had recently had a serious illness, and while in hospital listened to our music, telling us that our music had a healing impact on her. Stories like this are the best reward that one can have.

How did you get involved in Celtic music?
In Brittany, there are traditional celebrations know as Fest-Noz. During these festivities, which range from two hundred to ten thousand spectators and dancers, there are a variety of dances such as Andro, Gavottes, Plinn, and pieces from other countries such as Scotland. At the age of eight our parents drove my brother and I to these events, so we became involved in Breton and Celtic music from a very young age.

What are some of the themes on Awen?
We already had some compositions such as Dans ar seienn (Silk dance), which is a waltz that we had created two years ago with Odran, and that we wanted to produce on one of our albums. Red An amzer, which is the sixth track on Awen, is a bourrée (a dance from central France) and the movement of the dancers when we play it made us think of a clock.

How is it different from your past recording?
The three previous albums were sung by Mael Lhopiteau. In December 2010, for a party in support of Free Bronkhorst (a boy who was at the time imprisoned in Mexico), we were asked to play as a duo, as we had done at the beginning. We had a lot of fun playing that night and the public enjoyed it too! This gave us the idea to make an album as a duo. Quickly we realized that we wanted to add electronic music and make it live. What was different for Awen compared to the six previous albums is how we composed the songs. We feel we have stretched our imagination in writing these melodies and especially in the electronic fusion with the Celtic, and the colour and feeling of our compositions. Working with Gabriel (Djibril) was also very powerful and very different from other times. Gab comes from the world of electronic music, and he began his career playing as a guitarist in a rock band, but he has also experience of Celtic music as a dancer.

What can the audience expect at a Plantec concert?
Our musical universe has its roots in dance – there’s lots of energy and movement in our show. The staging is different for each album. For example for the album Mekanik we created an imaginary world which was quite dark. We talked about Breton legends, of witches and trolls. The latest disc is a little different because it is instrumental, so people who come to our shows are projected into a space where the body is king. Both conform to the dancers and to the fans of Celtic music. Of course we call this electro Celtic music, but I don’t think Plantec can be placed in any category or box. I believe that all these years we have managed to maintain our integrity and really be ourselves.

What’s next on the band’s agenda?
In November we’ll start work on a video clip of the first song on the album Orin. We will use videos of live concerts and also scenes to create the atmosphere and feeling of the song. It’s really amazing and very exciting to produce!! For the future, music, tours and projects will guide us!

Are we doing enough to preserve and promote Celtic culture?
There have never been so many Celtic artists, festivals, web-sites, magazines as there are today. All this helps to promote Celtic culture, but the future of this culture has to be rich and varied for it to succeed, so that it evolves without losing its roots.

What can we be doing better?
I don’t know what we can do better, but I think in this world that is increasingly virtual, we should get out of our homes, meet our friends and go and listen to a good concert of Celtic music, or even better, Breton music. Traditional music is modern music because we live and experience it together, otherwise it becomes folklore.

En homage to their rich Breton heritage – and with a gentle nod towards things to come – longtime musical innovators Plantec find the right mix of past, present and future with their 7th studio recording Awen. A mélange of traditional instruments (bombarde, acoustic guitars) and modern technologies (synths, rhythms) conspire to create a colourful cornucopia of finely-crafted and contemporary Celtic compositions that weave like threads of musical tapestry into a greater quilted whole. By turns haunting, moving and melodic, the ten tracks linger long after the last notes have faded away, leaving listeners with a sense of both the familiar and the foreign. Standout songs include Orin Andro, Dans Ar Seieein Valse, and No Christou Loudeac.