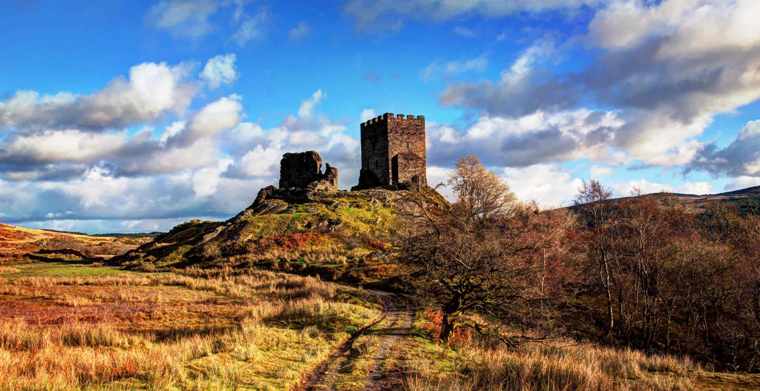 Whilst it was generally believed that Columbus was the first European to discover America in 1492, it is now well known that Viking explorers reached parts of the east coast of Canada around 1100 and that Icelandic Leif Erikson’s Vinland may have been an area that is now part of the United States. What is less well known is that a Welshman may have followed in Erikson’s footsteps, this time bringing settlers with him to Mobile Bay in modern day Alabama.

According to Welsh legend, that man was Prince Madog ab Owain Gwynedd.

A Welsh poem of the 15th century tells how Prince Madoc sailed away in 10 ships and discovered America. The account of the discovery of America by a Welsh prince, whether truth or myth, was apparently used by Queen Elizabeth I as evidence to the British claim to America during its territorial struggles with Spain. So who was this Welsh Prince and did he really discover America before Columbus? 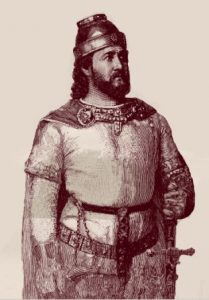 Owain Gwynedd, king of Gwynedd in the 12th century, had nineteen children, only six of whom were legitimate. Madog (Madoc), one of the illegitimate sons, was born at Dolwyddelan Castle in the Lledr valley between Betws-y-Coed and Blaenau Ffestiniog.

On the death of the king in December 1169, the brothers fought amongst themselves for the right to rule Gwynedd. Madog, although brave and adventurous, was also a man of peace. In 1170 he and his brother, Riryd, sailed from Aber-Kerrik-Gwynan on the North Wales Coast (now Rhos-on-Sea) in two ships, the Gorn Gwynant and the Pedr Sant.

They sailed west and are said to have landed in what is now Alabama in the USA.

Prince Madog then returned to Wales with great tales of his adventures and persuaded others to return to America with him. They sailed from Lundy Island in 1171, but were never heard of again.

They are believed to have landed at Mobile Bay, Alabama and then travelled up the Alabama River along which there are several stone forts, said by the local Cherokee tribes to have been constructed by “White People”. These structures have been dated to several hundred years before the arrival of Columbus and are said to be of a similar design to Dolwyddelan Castle in North Wales.

Early explorers and pioneers found evidence of possible Welsh influence among the native tribes of America along the Tennessee and Missouri Rivers. In the 18th century one local tribe was discovered that seemed different to all the others that had been encountered before. Called the Mandans, this tribe was described as white men with forts, towns and permanent villages laid out in streets and squares.

They claimed ancestry with the Welsh and spoke a language remarkably similar to it. Instead of canoes, Mandans fished from coracles, an ancient type of boat still found in Wales today. It was also observed that unlike members of other tribes, these people grew white-haired with age. In addition, in 1799 Governor John Sevier of Tennessee wrote a report in which he mentioned the discovery of six skeletons encased in brass armour bearing the Welsh coat of arms. 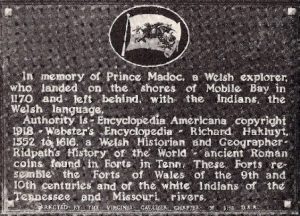 George Catlin, a 19th century painter who spent eight years living among various native American tribes including the Mandans, declared that he had uncovered the descendants of Prince Madog’s expedition. He speculated that the Welshmen had lived among the Mandans for generations, intermarrying until their two cultures became virtually indistinguishable. Some later investigators supported his theory, noting that the Welsh and Mandan languages were so similar that the Mandans easily responded when spoken to in Welsh.

Unfortunately the tribe was virtually wiped out by a smallpox epidemic introduced by traders in 1837. But the belief in their Welsh heritage persisted well into the 20th century, when and a plaque was placed alongside Mobile Bay in 1953 by the Daughters of the American Revolution.

“In memory of Prince Madog,” the inscription reads, “a Welsh explorer who landed on the shores of Mobile Bay in 1170 and left behind, with the Indians, the Welsh language.”