What inspired you to start drumming?

I started drumming in an Air Cadet Drum and Bugle Corps in Toronto (the 180 Squadron Skyraiders) , graduating to a Reserve Army Drum and Bugle Corps also in Toronto (2nd Signal Regiment).  As a kid I just liked the music they played and I took to it like a duck to water. They were both excellent bands and I still believe that the 2nd Sigs band was the outfit that left me with a lifelong love  of music. After I joined the Navy and moved to Halifax I looked for a band to play in, and discovered that all there was here was Pipe bands. So I joined one and never looked back. That was 44 years ago now.

Are they the same reasons that you do it today?

I have not played the side drum for years, as my skills departed quite some time ago. I still fill in on the bass drum when required for practices and I could do that in competition if needed, however, I turned my attention to managing bands almost 20 years ago, and I now find this to be my long suit. I still thoroughly enjoy the music played at the Grade 1 level that our band plays at, and I help out with the Jr. band(s) when needed. But I do enjoy stitching together the details behind the scene that the musicians generally don’t like to do. It works for me as they say. I still go on parade with all our bands as their Drum Major, which also keeps me in touch with the music. Over the years this has evolved to the point where the various Highland Games bring me in as their massed band drum majors. It takes a good understanding of the music to do this correctly and with flair, and I enjoy doing this as well.

Why the attraction to Pipe Band music?

I love the sound of a large pipe band, especially from my vantage point of right out front of the band. It still makes the hair on the back of my neck stand up. The larger the crowd we are playing for, the more I love it. And I also function as the MC for our shows that we occasionally do, which I also enjoy doing.

How long have you been involved with the 78th, and in what capacities?

I have been involved with this band for 44 years, through all its various changes. It started out as a parade band known as the Wylde Thyme Pipe Band, where I was the lead drummer for several years. In 1983 we moved to the Halifax Police Association and stayed with the Police for 19 years. The highlight of that was when we took the Police Band to the “World’s” in Scotland in 1989, placing second at the Grade 3 level. In 2001, the Police Department was under a real financial strain, and they invited us to take our wares elsewhere. So we did, and exactly 1 week later, we had joined forces with the Halifax Citadel Regimental Association. We have not looked back since. And candidly, I believe the Police Department regrets having made this decision as we have gone on to do so very well. That is a period of 44 years of continuous service the this organization, and I still get as big a kick out of it as when I started. I started as the lead drummer in 1967, became the President of the organization several years later, moved to the Drum Major’s position in the mid 1970’s, taking a break from it all for a 4 year period while I went to school in Toronto for a year and then to Washington DC for 3 years of exchange duties with the USN. After returning from Washington, we became the Halifax Police Band, and as I mentioned in 2001 we joined forces with the HCRA at “the Hill”. While I was away I still served as the Treasurer of the organization, and after my return held several executive positions. Today I am the President and the Quartermaster of the organization, as well as the drum major. Other folks have stepped up to assist with the organizing, band management and treasurer duties.

What events are the 78th involved with this year?

This year is a watershed year for our organization. At the Maxville Highland Games over the last several years, we have had 3 bands in competition. Our Grade 5 band did very well last year, finishing 3rd out of 18 bands and taking top drum corps in the process. Our Grade 3 band finished a very respectable 5th out of 10, and the Grade 1 band finished in second place just by a hair. It was extremely gratifying. This year we have moved the grade 5 band up to grade 3, as many of their players graduated up to our Grade 1 band. For 2012 we have  our grade 1 and  grade 3 bands. The Grade 1 band is heading to Scotland to the World’s once again after a period of 5 years away for this scene, awhile the grade 3 band will go to Maxville. We changed our Pipe Major this year, and now the band is directed by Pipe Major Alex Gandy. Alex is a young man with very clever ideas, so we’ll see where this change leads us. The band has grown this year to the point where we should be able to field over 20 pipers at the World’s, plus a 15 person drum section. We will of course support all the Highland Games in the Maritimes with Moncton, Pugwash, Antigonish, New Glasgow and Fredericton being among them, as well as doing several parades and civic events. So from winning the Grade 1 competition in Maxville in 1993 until today, we have had a very successful run of many years as a Grade 1 band.

What was it like to perform with Sir Paul McCartney?

Performing with Sir Paul was a rush, the likes of which actually surprised even me. As the oldest guy in the band, I thought I had seen it all. He is an extremely nice man who is very genuine. When we went to rehearse with him the night before, we played Mull of Kintyre through once. He turned and looked at us and said: “well, you really do know your stuff” and we moved to working out the staging for the next hour. The night of the concert was almost surreal. A huge harvest moon was hanging just over the fort at the Citadel, they had a huge Union Jack flying in honour of him, which was spotlighted and there were all sorts of people out there. We knew that because we heard them. Couldn’t see them with the lights in our eyes, but every one of us was affected that evening in one way or another, especially with the reception they gave the band. It was really quite an astonishing reception we got that evening, and when we were walking back to the hill from the commons we were stopped all along the way by people who couldn’t believe that a band of our caliber came from Halifax. That was our watershed performance and I will never, ever forget it. Quite the night!

How else are you involved with the Celtic community?

I ran the Halifax Highland games for several years along with a superb group of volunteers, and again for the last two years of its existence. Unfortunately, this Highland Games died as our funding was reduced to the point where we could no longer carry it out. Our volunteer base was tired and it shrank at the same time, so we took the very difficult decision to cancel the games. It’s also true that Halifax has an abundance of events every weekend in summer. This is not the case at virtually every other Games we attend in the Maritimes, where their Games are one of the biggest events of the summer. So we also suffered from a good deal of “event fatigue. All combined, we just couldn’t make a go of it any more. My current involvement with the 78th Highlanders organization at 2 nights a week and three once a month is in and of itself quite a large commitment on my part, so my current activities are restricted to the band, which is my first love.

In your estimation, are we doing enough to preserve and promote Celtic culture today?

No, we are not doing enough to preserve and promote Celtic culture. If we were, the Halifax Highland Games would still be alive. It is our showpiece and there are still many people who want them to return. The unfortunate reality is that unless we find a new major sponsor, the Halifax Games are gone. Beyond the Highland Games, I think there are sufficient activities, but as a bellwether for Scottish culture, the Games were it. I well recall when I came back from the USA in 1983, and I was going around town looking for a sponsor for the band. The most common answer I got was this: “why would we do that, this is an English town”. Imagine that, in the capitol of New Scotland. There is work to be done.

If not, what can we be doing better?

What can we do better? A very good question. I find the Cape Breton dances in town are well attended and popular, the band scene is alive and well, and there are a number of concerts and the like taking place all year long. So to that extent, and taking our lessons from the Halifax scene where we have experienced “event fatigue”, I think the level of Scottish activities is about right. I believe the Scots, the North British Society are experiencing the same phenomena in that attendance seems to be dropping at their events, Robbie Burns Night for example, so they are looking for new ways to ensure their contribution to the Scottish cultural scene in Halifax remains relevant.  As for me, I am personally very satisfied that my contributions to it have been good ones for a very long period of time, as the 78th has risen from a very junior band at the Grade 3 level to the Grade 1 level, with junior bands all coming along behind is. We will pass the torch to them in the fullness of time. I am satisfied that my own personal contribution has made a difference. 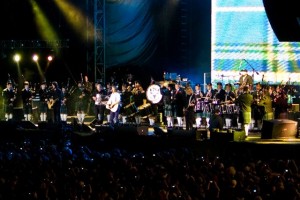