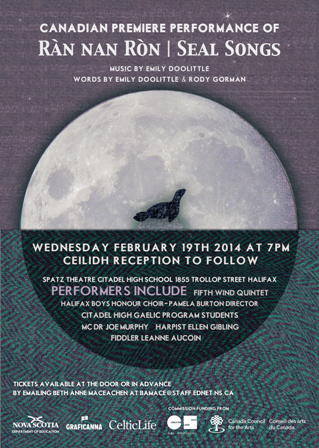 By the time the performers exit the stage after tonight’s Seal Songs show at the Spatz Theatre in Halifax, the presence of Gaelic in Nova Scotia will be entrenched even further. Along with event coordinator Donna McInnis, Melissa Shaw and Beth Anne MacEachern worked diligently behind the scenes to bring the performance together. Here’s what they had to say about the significance of tonight’s event.

MS: I am a Cape Bretoner of Scottish Gaelic descent. My grandparents’ first language was Gaelic.

BM: I have Gaelic heritage from my father’s people. They were from Glendale in Cape Breton and Airsaig in Scotland before that. I come from Newfoundlanders from Bell Island on my mother’s side.

MS: I am Gaelic program coordinator at Citadel High, and Donna came to me with the idea, and had wanted to include our Gaelic program students.  I then directed her to our Gaelic language teacher, Beth, who took over the planning on Citadel’s end.

BM: I was brought in to this project early on to work as a teacher liaison between the school, the students, the musicians and the venue. I decided to get involved because I knew it would be an excellent opportunity for my students to be involved and I knew they would be excited by the story behind the Seal Songs piece.

What is the event’s core mandate?

MS: To showcase the language, the musicians, and the tradition.

BM: The event’s mandate it to showcase students and Gaelic culture and music. This is an event which celebrates the quality of educational experience in our schools.

Why is it an important event for the community?

MS: There are so many people in Nova Scotia of Celtic descent that may be unaware of the beauty of the language and the stories. Also, it is a simply a wonderful musical event.

BM: It is an important event because it brings together many different groups and it will engage different people who may not have been exposed to Gaelic language previously.

What can attendees expect?

BM: Attendees can expect an engaging musical piece and delightful choir, together with the Gaelic language.

MS: I will always remain involved with Gaelic.

BM: Yes – each year Citadel hosts an event like this.

MS: I coordinate our Gaelic program at Citadel High, apply yearly for Gaelic language program grants from the Department of Education to continue our program (and enable a Gaelic language teacher to be based at our school), teach Gaelic Studies 11, am actively involved in learning the language through classes in Halifax and the Gaelic College in Cape Breton, sit on the Board of Sgoil Ghaidlig an Ard Bhaile (Halifax’s Gaelic Language School), try and expose my children to as much Gaelic culture and language as possible, and promote the language and culture as much as I can.

BM: I am Citadel High’s Gaelic Language teacher. I also work on a circuit through the Halifax Regional School Board.

MS: There can always be more done, but I think that things have definitely improved in the last 5-10 years.  People in Nova Scotia are once again raising their children with Gaelic as the first language. Educating people about the language and culture and raising awareness of the key role the culture and Gaelic worldview still plays(even if people do not recognize it as inherently a Celtic/Gaelic worldview) in Nova Scotia and throughout the world is, I believe, one of the keys.

BM: I think that individuals are working very diligently on Gaelic culture in Nova Scotia. I also feel that more can always be done in the schools and government to support the Celtic cultures of Nova Scotia.