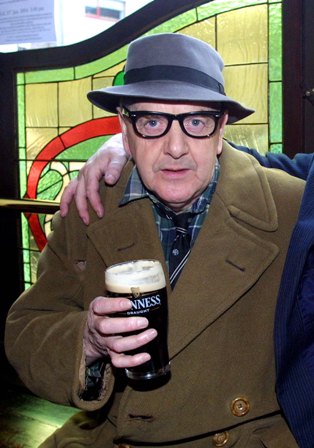 It was a larger-than-life meeting of minds; two or Ireland’s finest scribes – Brendan Behan and Patrick Kavanagh – sharing pints and discussing love, life and literature in a small Dublin pub. Ulster playwright, poet and author Ken McElroy captured the now-legendary soiree in his play The Rare Oul Times. Here, he opens up about himself and the production.

Roots
I was born the son of a General Merchant (Groceries / Coal / Animal Foods) in the small linen town of Gilford Co Down.

Interest in writing
I seemed to have inherited a love of poetry and writing from both the paternal and maternal sides of my family as going back several generations there has always been a history of writing particularly poetry. Also the love of the written and spoken word seems inherent in the Irish. At both Primary school and Grammar school I won prizes for poetry, so I suppose I’ve dabbled in verse since childhood.

The reasons I write today
I suppose I’ve slightly moved away from poetry and gravitated more towards short stories. Some of the short stories have done reasonably well and have been broadcast on BBC Northern Ireland, RTE Radio Dublin and even on Dutch radio. Like many writers I like to listen to old stories and tales often garnered from old men in pubs and in local history groups. As I grew up in an area known as the Linen Homelands where virtually everyone had members of their extended family working in the many facets of an industry which produced so many characters and stories there nearly always is a linen theme running through much of my writing.

Inspired the ‘Rare Oul Times’
Sixteen years ago I read a book by the Dublin writer Anthony Cronin called ‘As Dead as Door Nails’. It was based on the many colourful writers who frequented the Dublin literary pubs of the 1950s such as Brendan Behan, Brian O’Nolan (pen-name Flann O’Brien), JP Donleavey (The Ginger Man) and Patrick Kavanagh a cantankerous Irish poet. All had one thing in common, very little money and a big dependency on alcohol. In his book Cronin mentions that one night while drinking in a Shebeen in Dublin called the Catacombs he and his friends were surprised to see Brendan Behan and Patrick Kavanagh come in together. He was surprised because both men had a huge dislike for each other as Dublin wasn’t big enough for both their egos. In the years following Behan went on to write hugely successful plays such as Borstal Boy and the Hostage and briefly became the toast of Broadway and the West End of London with his drunken antics and colourful language, while Kavanagh with his caustic tongue, dishevelled appearance and prone to tapping people up for money and drink went on to become Ireland’s most celebrated poet alongside Yeats. Such was the colourful stories about both these larger than life characters that I had the idea of writing a play set in 1950sDublin on the night that they went out drinking together. The action takes place in a snug in the Bailey pub and the audience is eaves droppers as the two men discuss their lives, their loves and their failures in the Dublin of that period. The play is 90% humour and 10%pathos with the occasional old Dublin ballad sung by Behan. The title of the play comes from Brendan Behan who once said that the 1950s were ‘The Rare Oul Times’ in Dublin.

The challenges
The biggest challenge was getting funding and putting together an unknown cast with a play written by an unknown Playwright and getting even small regional Theatres to put it on. The arts scene in Ireland is no different to other parts of the world in that there is elitism and small cliques including many arts critics who have their own elevated ideas of what constitutes real drama or poetry and are not always welcoming to what they would see as popular theatre. If it was a play concerning the deep melancholy of a Trappist Monk it would be more likely to find acceptance.

Why the play became successful
Being in the right place at the right time. Virtually from its first performance in a tiny theatre in 1999 the audience reactions were hugely positive with one critic observing that this play will run. The big stroke of luck for the production was that the Celtic Tiger economy in the Republic of Ireland was at its height and the Irish government began funding theatres in every county town which meant that there was not enough small scale touring plays to fill the programmes of the many new theatres. Virtually overnight we found ourselves touring around Irelandand featuring in theatre programmes alongside much more famous productions and internationally regarded theatre companies. Success of course breeds success and after winning a theatre award in Dublin in 2001 for maintaining the best traditions of small Irish touring theatre we have since taken the play to the US, Germany and all around England and Scotland including a wonderful two week run at the Edinburgh Festival in 2003.

Why the play continues to be popular
Well I suppose if you take two of Irelands most colourful literary characters set them in a snug in a typical Dublin pub with a couple of pints of Guinness and a couple of glasses of Whiskey, throw in lots of humour and a few bawdy old Dublin songs, add a little dash of pathos and you have a recipe for a great nights theatre. Throw in all these ingredients with the talents of actor Oliver Moore who is almost a reincarnation of Brendan Behan and it’s a reasonably sure bet you will attract good and enthusiastic audiences. Thus it has proved.

How the production has evolved
As we have travelled around the country we have met many literary people including close family members of both Behan and Kavanagh as well as other people who knew them and often drank with them. They have given us many new stories, anecdotes and incidents concerning both characters which I have continued to weave into the dialogue. We were actually invited to do a performance for Carmel Behan who is the only sister of Brendan in Crawley Town Hall just south of London. She gave me a few stories which I added into the script

Further Performances this year
We recently played three nights in London and will be in Newcastle upon Tyne,Manchester and Liverpool shortly finishing up at the Old Courthouse Theatre in Antrim early next month.

Next play
I have just finished a new play called ‘Blackleg’ (a term for a strike breaker). The play is about a bitter Mill Strike in Ireland in 1948 which divided the Mill village I grew up in. It also divided many families and friends for many years after the strike was resolved and even today many are recalled as strike breakers.. At the moment it is just at the readings stage, but I am hopeful that it will make it on to a few stages. That said it will be very difficult to repeat the success of the ‘Rare Oul Times’